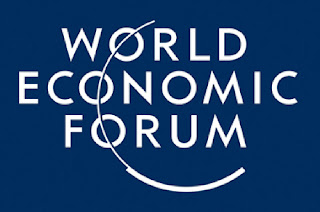 The World Economic Forum today (7th September) released its latest Global Competitiveness Report (2011-2012), which reports that Sri Lanka has made an impressive jump of 10 places in the rankings, to 52nd from 62nd in the 2010-2011 report. This is a further improvement from the 2009-2010 report which ranked the country at 79th position.
The Institute of Policy Studies of Sri Lanka (IPS) was the Sri Lankan Partner Institute in conducting the Executive Opinion Survey which is a key element in building the GCR rankings, and on Monday the IPS received an exclusive preview of the results via international audio conference with the WEF headquarters in Geneva, Switzerland. It was noteworthy that the WEF economists speaking to all the partner institutes specifically mentioned Sri Lanka as having performed strongly in rising up the rankings, and are among the top risers in the Asian region.
On the eve of the global release of the report, we spoke yesterday (6th September), directly with an official at the WEF to get Sri Lanka-specific perspectives on the latest report.
Thierry Geiger, Associate Director of the WEF’s Centre for Global Competitiveness and Performance said, “Sri Lanka has made a remarkable performance. When I look at the evolution across all indicators, Sri Lanka shows improvements on 80% of them – 80-90 of the 110 indicators – both in terms of scores as well as rank.”
“Last year was a big jump. But you need to be cautious of ranks. So many countries are ranked so close to each other. It’s important to focus on the scores. In the last GCR, Sri Lanka improved its score by 0.24 points which we consider a big jump. This year the score improvement was not as big as last year, but there is consistency”.
Sri Lanka made the greatest improvements in scores, year-on-year, in the pillars of ‘macroeconomic stability’ (up by 0.48 points) and ‘infrastructure’ (up by 0.33 points). Meanwhile, the most noteworthy decline in scores was in the pillar of ‘labour market efficiency’ (down by 0.11 points).
Certain pillars still sticky
Despite the strong performance, however, scores of certain indicators weakened, reflecting the business community’s continued concern on these issues and their impact on economic activity. Geiger noted that “Everything is on the rise in Sri Lanka except for pillars like ‘public trust in politicians’, ‘irregular payments’, and ‘independence of the judiciary’ which have declined. The pillar of ‘red tape’ has improved significantly from a score of 3.8 to 5.1 (rising from rank of 113 to 59). An improvement of 0.8 is seen in the ‘security’ pillar, which the WEF economist noted was “remarkable”, and attributed it to the improved climate following the end of the war.
Table 1: Sri Lanka’s recent performance on GCR pillars 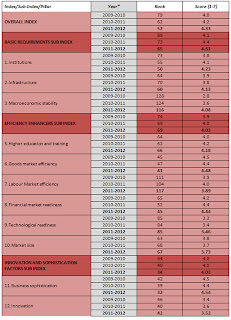 Notes: *Basket of countries was 133 countries in 2009-10, 139 in 2010-11, and 142 in 2011-12. Due to variances in total countries being ranked over the 3 periods, the key point of interest should be the changes in scores of each pillar.
Source: Global Competitiveness Report (various years), WEF
Guarding against complacency
Some recent reformers appear to have stalled in their rise up the rankings, and this was considered noteworthy. “What is interesting is that we are observing some stagnation among several developing Asia economies, for example Vietnam and Indonesia. Even though they had been doing quite well on the GCR lately, they have stagnated this year. We attribute it to growing concern among the business community that the necessary reforms have not been made fast enough to sustain growth at high levels”, Geiger said.
It appears that, in these countries, expectations have not been met and the business community is “getting impatient”. This had important implications for a country like Sri Lanka where, although improvements in the rankings have been made it is important that policymakers and government officials do not become complacent. Geiger remarked that, “As a country develops, expectations change, the needs evolve. If governments don’t deliver, this creates disappointment among the business community, and this is reflected in the scores of countries like Vietnam and Indonesia this year.”
Can it be sustained?
When asked if it is likely that the recent dramatic jumps in GCR scores and rankings were mainly due to strong positive sentiment by the business community following the end of the war and whether this was likely to taper off in the coming years, he noted that, “it is hard to quantify the optimism. Rwanda observed a similar situation when it came out of conflict in the 1990s. Sometimes we tend to observe overshooting due to short term strong positive sentiment. But for Sri Lanka, it is not only the opinion survey data that shows the improvements, hard data on the various indicators support this too. But the country must guard against complacency”.
Asian picture
Asia’s rise to economic prominence has been accompa¬nied by a remarkable dynamism in terms of competi¬tiveness. Over the past five years, several countries in the region—including China, Indonesia, Vietnam, and Sri Lanka—have made important strides in the GCI rankings. Yet the disparities in terms of competitiveness within the region are unique, ranging from Singapore at 2nd place to Timor-Leste at 131st. Two of the region’s largest economies, Bangladesh (108th) and Pakistan (118th), continue to rank very low, while a number of Asian emerging economies enter the top 30.
Sri Lanka scores better than India (91st) this year too, but the WEF economist cautioned against comparing the two. “You must keep in mind that improvements in smaller economies are easier to make”. However, he added that even among the ‘developing Asia’ country group, and even among smaller economies, Sri Lanka does well. Table 2 provides a selected cross-country benchmarking, showing that the country still lags behind South East Asian neighbours like Malaysia, Thailand, and Indonesia, and clearly has some way to go to become competitive on par with these dynamic economies.
Table 2: GCR 2011-2012: Sri Lanka’s performance vis-à-vis selected economies

Global picture
Switzerland tops the overall rankings of the GCR, while Singapore overtakes Sweden for second position. Northern and Western European countries dominate the top 10 with Sweden (3rd), Finland (4th), Germany (6th), the Netherlands (7th), Denmark (8th) and the United Kingdom (10th). Japan remains the second-ranked Asian economy at 9th place, despite falling three places since last year.
The United States continues its decline for the third year in a row, falling one more place to fifth position. In addition to the macroeconomic vulnerabilities that continue to build, some aspects of the United States’ institutional environment continue to raise concern among business leaders, particularly related to low public trust in politicians and concerns about government inefficiency. On a more positive note, banks and financial institutions are rebounding for the first time since the financial crisis and are assessed as somewhat sounder and more efficient.
Within the Eurozone, Germany maintains the lead, although it goes down one position to sixth place, while the Netherlands (7th) improves by one position in the rankings, France drops three places to 18th, and Greece continues its downward trend to 90th. Competitiveness-enhancing reforms will play a key role in revitalizing growth in the region and tackling its key challenges, fiscal consolidation and persistent unemployment.
The results show that while competitiveness in advanced economies has stagnated over the past several years, in many emerging markets it has improved, placing their growth on a more stable footing and mirroring the shift in economic activity from advanced to emerging economies. China (26th) continues to lead the way among large developing economies, improving by one more place and solidifying its position among the top 30. Among the four other BRICS economies, South Africa (50th) and Brazil (53rd) move upwards while India (56th) and Russia (66th) experience small declines. Several Asian economies perform strongly, with Japan (9th) and Hong Kong SAR (11th) also in the top 20.
Xavier Sala-i-Martin, Professor of Economics, Columbia University, USA, and co-author of the GCR, notes in the report that, “Amid re-emerging concerns about the global economic outlook, policy-makers must not lose sight of long-term competitiveness fundamentals. For the recovery to be put on a more stable footing, emerging and developing economies must ensure that growth is based on productivity enhancements. Advanced economies, many of which struggle with fiscal challenges and anaemic growth, need to focus on competitiveness-enhancing measures in order to create a virtuous cycle of growth and ensure solid economic recovery.”
The Global Competitiveness Report’s competitiveness ranking is based on the Global Competitiveness Index (GCI), developed for the World Economic Forum by Sala-i-Martin and introduced in 2004. The GCI comprises 12 categories – the pillars of competitiveness – which together provide a comprehensive picture of a country’s competitiveness landscape. The pillars are: institutions, infrastructure, macroeconomic environment, health and primary education, higher education and training, goods market efficiency, labour market efficiency, financial market development, technological readiness, market size, business sophistication and innovation. The rankings are calculated from both publicly available data and the Executive Opinion Survey, a comprehensive annual survey conducted by the World Economic Forum with its network of Partner Institutes. This year, over 14,000 business leaders were polled in a record 142 economies. The survey is designed to capture a broad range of factors affecting an economy’s business climate.
*Ayodya Galapattige (Research Officer – IPS) led the IPS team conducting the Executive Opinion Survey for WEF. Harini Weerasekera (Project Intern – IPS) contributed to this article.
Read the latest 2011-2012 GCR Report:The Global Competitiveness Report 2011-2012
Tags: International
Related Articles