Korea Calling: Results from a Snap Survey of Job Seekers and Issues of Youth Unemployment 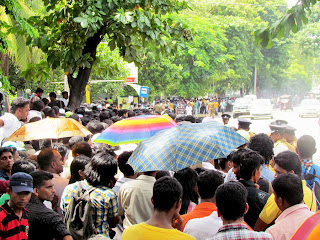 Over 4,000 youth gathered along Havelock Road near the Police Field Force Headquarters on Monday to apply for jobs in South Korea, following an announcement by the government under a bilateral foreign employment scheme with South Korea; an arrangement that could potentially provide employment in Korea to thousands of Sri Lankans annually. This centre in Colombo was one of 29 centres islandwide set up by the Ministry of Foreign Employment that are distributing applications for Korean employment (particularly language tests), and attracted youth from various districts who had queued since afternoon the previous day. While registration of applicants began at around 8am, by 11.15am the officials along with Police support, announced to those queued that the centre is now closed as the maximum number of 3,500 applicants had been registered. Just prior to this, and the slight tension that ensued following the announcement, IPS researchers conducted a snap survey of a sample of 41 youth in the queue, to get some insight into their profile, education level, employment status, and reasons for seeking migrant work in South Korea. This article discusses the key findings, supplemented by background information on youth unemployment and foreign employment migration from current research by the IPS.

Youth unemployment presents a critical challenge in post-war Sri Lanka (see comments by IPS Board Member Dr. Anura Ekanayake on this issue at the Ceylon Chamber AGM recently – http://ipslk.blogspot.com/2011/08/realizing-post-war-miracle-challenges.html)
The International Organization for Migration (IOM) estimates that, annually, Sri Lanka sends over 250,000 workers on foreign employment worldwide. According to data published by the Central Bank of Sri Lanka, remittance inflows from Sri Lankan workers abroad amounted to 8.31% of Sri Lanka’s GDP in 2010, second only to export earnings from goods, but far above that of average FDI inflows.
According to IPS research, during the period 2005-2009, South Korea had been the dominant destination for Sri Lankan migrant workers compared to other East Asian countries.  A bilateral agreement between the Sri Lankan and South Korean governments on migrant workers has been a key factor influencing this.
What Does the Snap Survey Reveal?
The results from our snap survey show that the majority of the job seekers were males (78%) in the 25-30 age group, and the hometown districts of nearly all of them were either in the Western or the Southern Province (see Table 1). Colombo and Matara showed the most number of applicants, counting 26.8% and 22% respectively.
An important point to note is that, overwhelmingly, nearly 66% of those queuing to apply to work in Korea had passed their GCE A/L examinations (see Figure 1). This is consistent with the overall numbers for Sri Lanka. According to the Labour Force Survey of the Department of Census and Statistics, unemployment in Sri Lanka is highest among those in the 20-24 age category who have passed the GCE A/L exam, a staggering 37% in 2009 (see Figure 3). Moreover, according to this data, the highest unemployment rate for those with A/L qualification is in the Southern Province (20% compared to a national average of 12%), followed by the North Central, Eastern and Central Provinces (see Figure 4).
While between 1989-2006 the majority of out-migrants from Sri Lanka were female, by 2008 the proportion had equalized.  In recent years, more males have out migrated for foreign employment than females. According to data available for 2009, the Western Province sends the highest number of migrant workers overall, of about 27.3%. The Southern Province sent only around 8.7%. The top 4 sending districts in 2009 were Colombo – 12.4%, Kurunegala – 9.5%, Gampaha – 9.6%, Kandy – 9.4%. Five districts – Colombo, Kurunegala, Kandy, Gampaha and Kalutara – accounted for 45% of the total departures for foreign employment.
Although we may be quick to assume that most of these Korean job aspirants were unemployed youth, the survey revealed that in fact the majority were already employed in Sri Lanka, around 63.4% of those surveyed. Around 36.6% were unemployed. When the respondents were asked as to their main reasons for seeking work abroad as migrant workers, 38% cited ‘low wages’ or alternatively ‘low income’ in Sri Lanka, while around 9% cited ‘limited job prospects’. This would indicate that these youth were suffering from underemployment rather than unemployment, and the relative higher wages in countries like Korea was the key attraction for out-migration, rather than pure unemployment in Sri Lanka.
(Of those unemployed, the duration of their unemployment ranged from 7 months to 11 years, but on average, was unemployed for around 2 years.)

Of those surveyed, the majority of 61% reported that they did not have any form of vocational or professional training, with only 39% responding that they do. This is an important point to bear in mind, in the context of the new thrust of the country’s skill development agenda towards increasing the numbers of those with vocational training, under the National Vocational Qualification certification programme and the UNIVOTEC system. This also has an implication on the skills profile of migrants that Sri Lanka sends, where the government is keen to send workers with better skills rather than manual labourers.
The research team also inquired as to what kind of work the job seekers were interested in obtaining. The majority, 58.5% stated that they were seeking ‘any type of work’, while 12.2% stated that they sought ‘factory work’, and another 12.2% sought ‘manual labour’, and 17% sought specific occupations (for example, ‘working in a printing press’, ‘business administration’, ‘technician’, ‘motor mechanic’, ‘mechanic’, ‘welding’, and ‘sewing’). It appears that nearly all of the applicants had targeted Korea as their preferred foreign employment destination, as the survey revealed that nearly 88% had either completed or were in the process of completing a Korean language course. 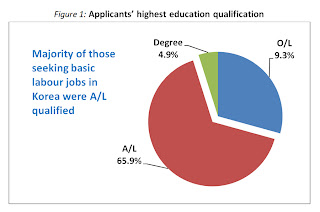 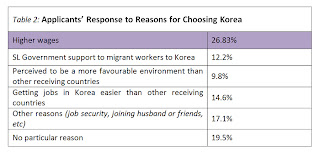 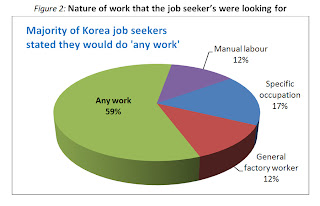 Better Migration Management at International Level Through Bilatarel MOUs
Bilatarel MoUs of the type signed between Sri Lanka and South Korea, while provided a systematic mechanism for sending an agreed number of workers each year, also have important migration management implications, in an era of increasing foreign worker harassment in countries in the Middle East. In an unpublished report on Sri Lankan migrant worker challenges prepared by the IPS, the benefits of bilateral MoUs with regard to migration management have been emphasized:
Korea Job Seekers in Broader Context
Unemployment levels have come down over the last decade, but they are still very high amongst youth (20 to 29 year olds), particularly the more educated (see Figure 3).  Unemployment is more of a problem outside the Western Province (see Figure 4), particularly for the more educated. But, it is surprising that even in the Western Province, where the unemployment rates are very low, even for the more educated individuals, youth are scrambling to find employment abroad.  It is also alarming that a majority of those aspiring to go to Korea are willing to go for any type of job, including for manual labour.
First, this suggests that many youth aspiring to go to Korea, many of whom are already employed, are not satisfied with their employment situation in Sri Lanka. The Labour Force Survey data of the DCS reveal that of those in the non-agriculture sector, about a half of the employed are in the informal sector.  Even in the Western Province, around 40-50% of those employed in the non-agriculture sector are working in the informal sector.  This suggests a need for creating better jobs in the country.
Second, the data suggest that the job aspirations are not very high even amongst youth who have passed O/Levels and A/Levels.  A majority of them are willing to go abroad to do ‘any job’.  This indicates the need to rethink skill development at the senior and tertiary education levels, such that school leavers are better prepared for the labour market. 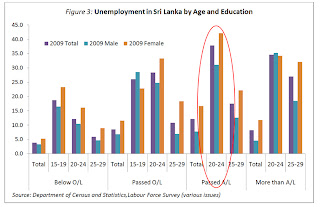 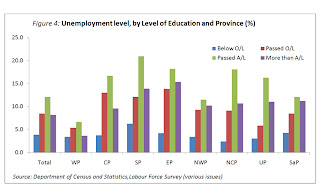 So, overall, here are some key takeaways from our snap survey and our background analysis:
–    The unemployment situation for youth in Sri Lanka is clearly a pressing issue, and needs to be addressed as an urgent priority in post-war Sri Lanka to ensure inclusive growth and prevent social discord
–    The majority of those seeking work in Korea were in the 25-30 and also the 20-24 age category.
–    Despite the fact that nearly 66% of those seeking Korean jobs were A/L qualified, 58.5% stated that they are seeking ‘any type of work’ in Korea
–    ‘Low income/low wages’ in Sri Lanka were the main reason cited by the youth for seeking foreign employment in South Korea 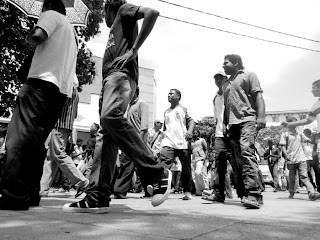