2010: ‘Phenomenal Year’ for Corporates, but Shared Growth across Sri Lanka Remains a Challenge

By Anushka Wijesinha (Research Officer) and Kithmina Hewage (Project Intern), IPS
While hailing strong earnings in the post-war pick-up, the Sri Lankan private sector should be more cognizant of its role in spurring inclusive growth…
The performance of the Sri Lankan corporate sector during the past financial year has been undoubtedly strong with firms seizing on the new business opportunities emerging after the end of the war. Between January 2010 and December 2010 the Colombo Stock Exchange benchmark All Share Price Index (ASPI) almost doubled from 3,494.6 to 6,635.9. A recent article by NDB Stockbrokers hailing the past financial year as “a phenomenal year” noted a significant and arguably unprecedented performance boost across all sectors reviewed by them. The report said, “the total annual profits of companies selected to represent the overall market increased 139% Year-on Year (YOY) to Rs. 87,693 Mn in the Financial Year 10/11” . In terms of the price-earnings (P/E) ratio, the report noted that Sri Lankan listed firms currently equal Malaysian firms, and during the last year, has done better than the ‘tiger economies’ like Taiwan and Thailand. Furthermore, ‘the phenomenal year’ for corporates appears to stem from not just a few sectors but, in fact, a growth in profits across all the major sectors of the economy – Motors – 669%, Power & Energy – 230%, Healthcare – 211%, Banks, Finance and Insurance – 82%, Telecommunications – 97%, Plantations – 108%, Hotels & Travels – 146%. 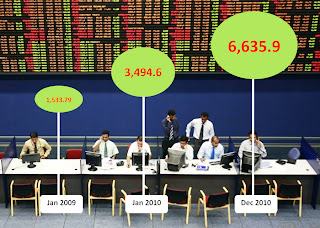 Ranmini Vithanagama, ‘Earnings Snapshot: Thus Concludes a Phenomenal Year’, NDB Bank (June 2011)
While undoubtedly the end of the protracted North-East conflict now provides ample opportunities for economic growth, and corporate earnings reflect this renewed business optimism, it is important for the corporate sector to acutely aware, and consistently cognizant, of the need for this growth to be broad-based and ‘inclusive’.
The Central Bank, in its Annual Report 2010 too recognises this. It states that, “inclusive growth refers to a rapid pace of sustainable growth which is broad based across sectors. At the same time, there should be enhanced opportunities in terms of access to markets, resources and social protection…” The challenge for Sri Lanka in ensuring inclusive growth seems to lie in the latter, as disparities in economic performance and prosperity between provinces in the country have been a critical and persistent public policy issue.
Shares in the CSE have grown fast. But shares of growth across regions – less so
For decades, the Western Province has dominated the country’s economic geography. While the concentration of national GDP in the Western Province has steadily, albeit marginally, declined over the last 5 years from 50.8% in 2005 to 45.1% in 2009, it is still very much larger than of all other Provinces. Provinces that are often assumed to be strong ‘second tier’ economic centres still lag significantly behind; for example the Central, Southern and North-Western Provinces hold a share of 9.6%, 10.2% and 10.3% of national GDP, respectively. Even among these provinces, it is only the North Western Province that has demonstrated any significant improvement in its GDP contribution to the nation, rising from a 9.9% share to a 10.3% share. Meanwhile, the North Central, Uva and Northern Provinces lag far behind with shares of less than 5% of national GDP being captured by them. The Southern Province managed to increase its GDP share by only 0.1% between 2008 and 2009. 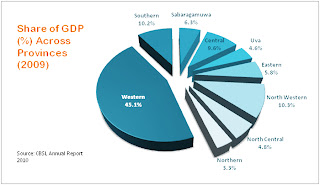 Need to push private enterprise activity nation-wide
Investments, new business start-ups and expansions in the country, both foreign and domestic, have begun picking up in the last year. However, the distribution of these is clearly still concentrated in the Western Province. The regional distribution of new industrial enterprises as reported by the Central Bank provides clear evidence that new projects in 2010 have been undertaken predominantly in Colombo, and to some extent in Gampaha, Kalutara, Puttalam and Kandy. While the total number of industrial enterprises increased from 2,340 to 2,404 between 2009 and 2010 in the Colombo district, the increase in the Anuradhapura district, for example, increased only from 27 to  30 during the same time period. Yet a positive sign in terms of post-conflict recovery is that Trincomalee and Ampara, despite being in the conflict-affected Eastern Province, have shown improvement on par with several other districts. 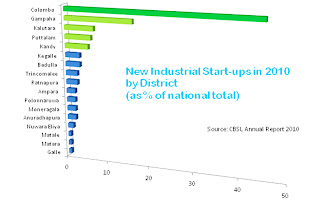 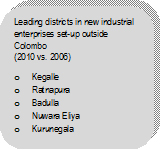 Interestingly, new BOI projects between 2006 and 2010 have also largely followed a similar trend, despite efforts to promote new BOI ventures in lagging regions through, for example, the ‘Gamata Karmantha’ programme and other special fiscal incentives schemes for projects locating in regions outside the Western Province. As is clear from the illustration below, according to Central Bank data, regions outside the Western Province have not seen a significant rise in Section 17 registered BOI industrial start-ups between 2006 and 2010. Colombo and Gampaha continue to dominate the BOI industry geography.
Yet, there are some encouraging signs as certain districts have shown increases in the number of BOI projects locating there between 2006 and 2010; for example Kegalle (18 to 31), Ratnapura (25 to 37), Badulla (11 to 22), Nuwara Eliya (41 to 52), and Kurunegala (61 to 76). 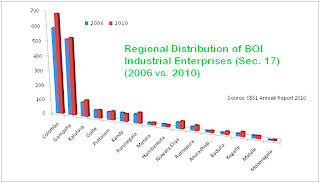 Poverty falls by 41%, but disparities remain
The latest calculations of poverty indices show that the poverty level of the country has further declined from 15.2% reported in 2006/07 to 8.9% in 2009/10. Yet, the breakdown of poverty rates according to regions paints a less bright picture. Disparities between regions in terms of the GDP share of the nation as well as the distribution of enterprise activity, would impact the disparities in poverty across the country as well. While the poverty rate in Colombo ranges at 3.6%, the poverty rate of Batticaloa is reported at a high 20.3% (an increase from 10.7% in 2006/07). It is not only that there appears to be a remarkable difference between these two districts, but the fact that the poverty rates in areas like Batticaloa (20.3%) and Moneragala (14.5%) being well above the national rate should be a cause for concern.
Commercial activity leading to poverty reduction: the case of Vavuniya?
In a likely positive indication of how enterprise and commercial activity can translate into lower poverty, although not rigorously empirically analysed, could be the case of Vavuniya. Poverty rates in Vavuniya in 2009/10 were as low as 2.3%, and could reflect the fact that Vavuniya was the veritable hub for relief activities during the height of the conflict. Some key supply routes were centered in Vavuniya, local and international aid agencies had their supplies warehoused in, and often purchased from, Vavuniya, and we personally witnessed local agencies and individuals sourcing large quantities of relief material from local stores in the district, as well as labour from local communities. In essence, many parts of Vavuniya saw a concentration of commercial activity during the period under survey, and may have had an impact on poverty rates there. However, this is only positing, and requires closer examination before drawing any concrete conclusions.
Inclusive growth is in the national interest. Corporate sector should get on board.
While it is true that it is largely the government’s role to implement policies and mechanisms to reduce inequality by, for example, using tax revenues to expand welfare and to provide targeted relief and widen social protection, the corporate sector does have a role to play. Not in terms of just ‘CSR’ (Corporate Social Responsibility) and assisting in meeting social needs like education and health, but rather in terms of promoting commercial activity, industries, small and medium entrepreneurship, and livelihoods via backward linkages.
The concept of ‘inclusive growth’ recognizes the need for growth as well as reducing inequality. Sri Lanka’s large-corporate sector needs to be mindful of this, and assume its broader ‘national interest’ role in promoting real private enterprise growth in the regions, going someway in bridging regional growth disparities. This may seem idealistic, but realistic and pragmatic avenues are available. Engaging SMEs via subcontracting, and promoting ‘clustered’ production (by region/product) by SMEs together with buy-back schemes are some examples. Toyota began linking up with small, independent producers to supply light-manufactured parts for its broader production chain. They not just sourced, but helped those SMEs improve their technology-utilization and management. This model not only enabled Toyota to focus on its core competencies of engineering, design, innovation, quality, etc., but also drastically reduce production costs.
While the corporate sector is sensitized to this need, the government’s role in creating the right enabling policy and institutional environment to incentivize such behavior by the corporate sector cannot be understated. For example, while laudable efforts are being made to improve our national rankings on the ‘Doing Business Index’ to attract more FDI, efforts must also be made to improve sub-national business climates. Questions like – ‘are local authorities able to provide private sector-oriented services to local entrepreneurs?’; ‘are the local licensing regimes streamlined and business-friendly?’; ‘what are the critical doing business constraints at the local level that are hampering private enterprise growth in the regions’?, need to be addressed.
(The theme this year of the IPS annual flagship publication, the State of the Economy, is ‘Post-conflict Growth: The Inclusiveness Imperative’. The report will be released in late September 2011)
Tags: Growth Industry
Related Articles