Emerging Health Challenges in Sri Lanka: More Money for Health and More Health for the Money 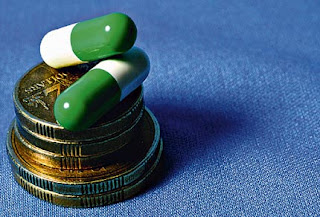 Sri Lanka has an impressive record of health care provision, with model accomplishments in health outcomes compared to similar developing countries. Over the decades, since independence, the Government of Sri Lanka (GoSL) has played a remarkable role in the health system; provision, financing, and regulation of health care across the country. Successes of these initiatives have been reflected in the impressive health outcomes associated with good maternal and child health, low levels of communicable diseases and long life-expectancy. Nevertheless, the growing and shifting health needs of the country, consequent to the transformation of the economy to a lower middle income level, and changes in social-demography and epidemiology, require more resources. The health system framework of the World Health Organization (WHO) identified six health system ‘building blocks’ towards achieving universal coverage (UC) with social health protection (SHP), of which health financing is a critical element.
Health Care Financing: Recent Trends
Health care in Sri Lanka is financed mainly by the government, with some private sector participation as well as limited donor financing. Public sector financing comes from the General Treasury, generated through taxation. Public sector services are totally free at the point of delivery for all citizens through the public health institutions distributed island-wide, while private sector services are mainly through ‘out-of-pocket expenditure’ (OOPE), private insurance and non- profit contribution.
Total health expenditure (THE) has fluctuated between 3.7% and 4% of GDP over the past few decades. Within this, the contribution from the Government was 45.8% in 2009, while the contribution from the private sector was 54.2%. The government health expenditure as a percentage of total government expenditure was 4.9% in 2007, which is a decrease of over half from the 7.2% recorded in 2006. It is increasingly evident that private sector financing has become more prominent over time.
A large proportion of the private sector financing comes from OOPE, i.e., individual cost borne by the patient, which is around 85% of total private expenditure on health and 51% of THE, again which is significant. Increasing OOPE is clearly linked to the continuing demand for outpatient care at private sector institutions – nearly 65% of outpatient care services in 2006 were provided by private health facilities. When it comes to inpatient care services, however, public health institutions are the leading provider. The proportion of publicly financed inpatient services was 72% in 2006, but it is a decrease from 80% in 1990. Private financing is certainly a good complement, as it provides additional resources, but the associated increase in OOPE for health by the patient, which is inherently regressive, creates inequity and social exclusion in availing of health care services.
Challenge 1: Problems due to Prosperity?
Sri Lanka is now transforming into middle income country status. Improving economic status and urbanization generates both positive and negative outcomes. On the positive side, it increases educational status and peoples’ expectations, which in turn results in greater demand for quality health care. Concurrently, on the negative side, changing lifestyles, consuming more fast food and unhealthy diets, the tendency for consumption of more alcohol and tobacco, living in polluted environments, and trauma due to occupational exposure, are drivers of enhanced health risks. Consequently, more financial resources will be required to meet this rising demand for easily accessible, and affordable quality health care.
Challenge 2: Ageing Population
Sri Lanka is also experiencing a demographic transition, reflected in the increased population of those aged 60-plus. Population forecasts predict a doubling of the country’s ageing population by 2040 (24.4%) compared to 2010 (12.1%) as life expectancy increases (due to improved island-wide preventive and curative health services) and fertility rates decline rapidly. Accordingly, the heightened fiscal cost for long-term care of this ageing population is an emerging challenge, along with the heightened burden of old-age pension provision.

Challenge 3: Rise of Non-Communicable Diseases
The epidemiological transition referred to earlier is the emerging shift from communicable diseases, which have largely been well contained, to a rise of non-communicable diseases (NCDs), for example, cardiovascular disease, diabetes, cancer, asthma/chronic obstructive disease, and mental illness. Currently, treatment for NCDs accounts for nearly 90% of the total ‘disease burden’, while curative treatment for infectious diseases and preventive treatment for maternal and child health account for only around 10%. Furthermore, diabetes and asthma are also on the rise: 10% and 15%-20% respectively, per 10,000 people. Whilst mortality rates due to infectious diseases have been declining, from 42% in 1945 to 20% in 2003, mortality rates attributable to NCDs are rising. Death due to diseases of the circulatory system was 23.8% of all deaths in 2003, a dramatic increase from 2.8% in 1945. International comparisons show that such deaths in Sri Lanka are as much as 20-50% higher vis-a-vis developed countries.
Increasing Health Financing: Three Dimensions
The universally accepted notion is that publicly financed health systems are optimal. In this context, the key question is how can additional funds be found for expanding Sri Lanka’s health care provision? There are different views expressed on how to increase ‘room’ for public health financing in the country. These are summarized in Figure 1.

The WHO Regional Health Financing Strategy for the Asia Pacific Region (2010-2015) and the World Health Report (2010) have highlighted the three dimensions which need to be considered in moving towards universal coverage and social protection, i.e., when all people have access to care – promotion, prevention, curative and rehabilitative – at suitable quality, without financial hardship. 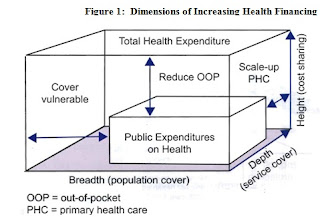 The breadth of the box in Figure 1 shows the proportion of the population covered from public health services. In Sri Lanka, people who are in under-served areas are not able to even access private care because they are located in rural areas. This is where the ‘depth of coverage’ comes in useful, by treating a broader extent by scaling up the primary care system.

Sri Lanka has a large health service network through primary, secondary and tertiary care institutions for promotion, prevention, curative and rehabilitative care services. Yet, most of the primary care institutions across the country are idle. Given the difficulty in allocating new financial resources, there is a growing recognition of the need to re-orient the current public health service structure to enhance the efficiency of resource use. Already, the Ministry of Health has begun strengthening the primary level care service structure with a proposed package of services of curative care including prevention and promotion. These services are provided through the Family Practice approach to address the rapid rise of the disease burden caused by NCDs and elderly care. The importance of this approach has also been recognized by policy makers, following strong advocacy by the officials of the Ministry of Health, resulting in an allocation of Rs. 908 million for strengthening primary level health care to address NCD care needs. While the country needs more money to spend for health care, increasing efficiency of resource allocation through re-orienting the primary level care services in the sector is an essential complement to bridge the funding gap, i.e., more health for the money spent.

Dimension 3: The Height of Coverage
The height of coverage shows the ‘cost sharing’ element. Insufficient public health expenditure results in higher individual out-of-pocket expenditure (OOPE) and lower population coverage. This can be tackled to some extent by making available essential medicines, especially for NCDs, at primary care facilities (Divisional Hospitals). When examining the provision of services, the public sector health system finances less for NCDs than the private sector. In the case of diabetes, for instance, the private sector spent 81.2% of total diabetes prevention and control care while the public sector invested only 18.8% for the year 2005. On one hand, expenditure for NCDs care by the patients themselves (particularly the poor) creates an extra burden on them, as their ‘financial risk’ (i.e., the amount a household pays for health care relative to its income/capacity to pay) increases. On the other hand, the gap in service provision is often a criticism of public health facilities, due to the continuous resource gap. This results in frequent unavailability of essential drugs and other diagnostic testing. In addition, care for NCDs in the public health system is provided at tertiary and secondary facilities, not at primary level facilities. As a result, patients (especially those in areas under-served by secondary and tertiary facilities) have to bear additional costs in seeking health care such as transport and foregone work. Interestingly, the treatment cost per patient at primary level facilities is in fact lower than at tertiary and secondary level facilities. This needs to be borne in mind when evaluating how best to allocate resources, and in attempting to ease the financial burden on patients. In middle income countries, prevention and promotion care for NCDs is mainly provided through primary care facilities because it has been recognized as more cost-effective than delivering them at secondary or tertiary care facilities. 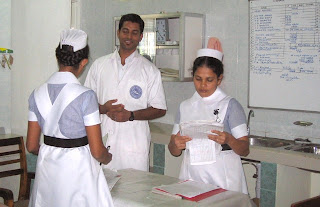 Prospects
Sri Lanka has enjoyed exceptional health outcomes, with strong maternal and child health and low prevalence of infectious diseases, at low cost, in the past two decades. However, as this article has shown, there are visible gaps/disparities in health outcomes with regard to NCDs and elderly care. Empirical data shows that the country needs sufficient investment in health, especially given the emerging burden due to NCDs and ageing population (i.e., elderly care needs). These needs have to be addressed soon to avoid the resultant socio-economic consequences, such as a withdrawal from the workforce early due to ill health in the case of NCDs, and the rising fiscal costs for pensions and long-term care in the case of the ageing population.
The Health Master Plan (2007-2016) for Sri Lanka estimated that the total health expenditure as percentage of GDP by 2015 would be 4.5 – 5% (medium) and 6.7% (high). This is based on various assumptions and projections but it appears that the emerging NCD burden and the ageing population were not adequately taken into account and if factored in more robustly, the requirement is likely to be much higher.
It is hard to find more money for health due to the limited fiscal space of the government. However, if existing resources can be allocated and utilized more efficiently, and health needs prioritized, the government would be able to extract more health for the same amount of money. This re-orienting process of improving service provision at lower level facilities would help to address the gaps in service of the poor and under-served. Improving accessibility and availability of health service delivery, especially for vulnerable groups, at an affordable cost will be a strong driver towards attaining universal coverage and social health protection, which the WHO framework has emphasized. It is evident that there are a myriad of policy options developed following careful analysis and evaluation by health experts. But what is most important now is for the government to provide the political leadership to implement the much needed reforms, with due consideration also to pilot-testing and impact assessments.
Tags: Finance Health
Related Articles