Climate Change and Human Health: Is Sri Lanka Ready to Face the Challenge?

This article is the first in a two part series in lieu of World Health Day – 7th April 2011, from the Health Economic Policy Unit of the IPS 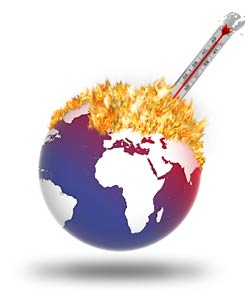 Climate Change is one of the burning issues being discussed extensively at the national and global level.  A few decades ago, climate change was regarded only as a ‘concept’ or ‘belief’ that was expected to happen only in the future. However, now we are experiencing the impacts of climate change in our day to day lives. This article looks at a key avenue in which climate change affects us all, not just in the longer term, but also now – our health.

Apart from health impacts caused by extreme weather events, secondary or indirect health hazards are being reported more frequently than before, and this is being attributed to climate change. Strains on access to safe drinking water, outbreaks of dengue, increase in kidney disease, higher rate of respiratory disorders, and malnutrition due to the impact on food supply are just some of the emerging health challenges blamed on climatic changes already taking place.

The Intergovernmental Panel on Climate Change (IPCC), defines climate change as “a statistically significant variation in either the mean state of the climate or in its variability, persisting for an extended period (typically decades or longer). Climate change may be due to natural internal processes or external forcings, or to persistent anthropogenic changes in the composition of the atmosphere or in land use”(i).

Over the 20th century the average temperature of the earth has increased by 0.4–0.8°C. This increase is expected to continue, and by 2100 the average global temperature is likely to be 1.4–5.8 °C warmer(ii). Over the last 100 years, sea level has risen between 10 and 25 centimetres worldwide and in some areas the mean precipitation level has increased whereas in some other parts in the world it has decreased(iii). These changes in meteorological elements have been linked to more extreme weather conditions like intense floods and droughts, heavier and more frequent storms, and a possible increase in frequency and intensity of some natural geographical phenomenon (e.g. El Nino and La Nina)(iv).

Though some beneficial health outcomes of climate change have been discussed (such as milder winters), its impact on health is largely negative(v). Human exposure to climate change can be direct as well as indirect and it has been scientifically proven that exposure to climate change places human health at risk. Direct exposure is mostly due to intense and frequent extreme weather events (floods, droughts, landslides, etc.), whilst indirect exposure relates to changes in the quality of air, water, quality and quantity of food, ecosystems, agriculture, livelihood and infrastructure. Figure 1 below illustrates pathways by which climate change affects human health. 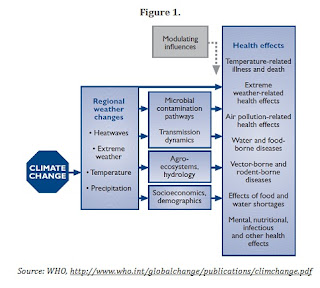 According to the World Health Organization (WHO)(vi), diseases such as childhood malnutrition, diarrhoea, malaria and viral fevers will be aggravated. Furthermore, it places the most vulnerable populations (e.g., the poor, disabled, women, and children), and those who live in specific geographical and environmental conditions (e.g. low-lying areas, river delta plains and seaside areas) at risk.  It has been estimated that the anthropogenic climate change has claimed over 160,000 lives annually. In 2000, deaths attributed to climate change outcomes were accounted to 154,000(vii). 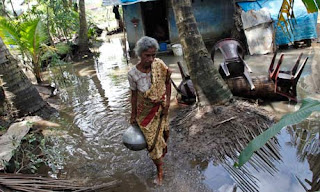 Sri Lanka being a small island nation falls into the United Nations Framework for Climate Change (UNFCC) and IPCC’s category of “vulnerable states”, which cannot be ruled out from serious threats of climate change. From Sri Lanka’s context, we could observe that apart from the deaths and disabilities caused by extreme weather events, secondary or indirect health hazards are reported more frequently than before. Problems in accessing safe drinking water, outbreaks of vector and water-borne diseases (dengue, diarrhoea), increased rate of respiratory disorders (due to dust and cold waves), more communicable diseases (skin diseases, typhoid fever), and malnutrition (due to inaccessibility for food) are inevitable. Psychological problems due to the loss of dwellings, habitat and income and loss of family members could also arise. Sanitation issues and other social problems are unavoidable along with ravaged floods and in camps of displaced people due to extreme weather events. Outbreak of Dengue, spreading of kidney diseases and food security can be regarded as some of the recent examples of negative health outcomes of climate change.

Dengue: Are We Losing the Battle?


Sri Lanka is experiencing an increasing trend of water-borne and mosquito-borne diseases during the last few years. The total number of reported cases and Case Fatality Rate (CFR) for Dengue are shown in Figure 2. We could observe a drastic increase in Dengue especially after 1999. This increasing trend further continued, reporting 34,896 cases in 2009 and 34,054 in 2010(viii). 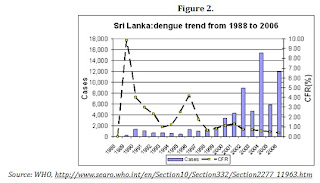 A recent study done in Sri Lanka has revealed global warming as the cause of Rajarata kidney diseases (ix).  A team of scholars led by a blood diseases specialist from the University of Peradeniya, Dr. Dhammika Menike Dissanayake, identified 18 types of poisonous algae by the name ‘Bluegreen Algae’ as responsible for spreading the disease. The team carried out an investigation to specifically determine the reason for contracting the disease. It revealed drinking water contaminated with a poison emitted by Bluegreen Algae in the irrigation system   as the cause of the kidney diseases. According to Dr. Dissanayake the main reason for the spread of these algae was the soaring temperature in the environment. In 1960, the average temperature in Anuradhapura was 31.5 degrees Celsius; this had increased to 32.5 degrees in 2001.


Food scarcity due to climate change and extreme weather events would cause nutritional problems. The worst flooding in 100 years came just two months before fields were to be harvested for the Maha season in the Eastern Province. More than 607,000ha were to be cultivated during this time, with over one-fifth of that in the four districts hit by the floods. Widespread flooding drove hundreds of thousands from their homes, left 43 people dead, and damaged or destroyed close to 30,000 homes. In total, the flooding affected more than 1 million people (x).
Responding to the Challenge: Way Forward
Von Hilderbrand (2009) emphasizes three steps that should be taken by the health sector at national level in responding to climate change:
(a) Assess the potential impact of climate change;
(b) Review the extent to which existing health system can cope with the additional threat posed by climate change; and
(c) Develop and implement adaptation strategies to strengthen key functions that already protect against climatic risks.

Most often, Sri Lanka’s health sector (especially the government sector) responds to immediate health necessities stemming from extreme weather events by distributing medicines, equipment, etc., and controlling most of the secondary health hazards that threaten to follow such an event. However, increasing instances of vector borne diseases and the increased rate of respiratory diseases imply that there are some gaps in longer term adaptation policies and practices. Hence more attention should be paid on long-term adaptation and mitigation measures and health outcomes of climate change should be integrated with the national health policy.

Building an inter-sectoral co-ordination within the country is crucial in addressing the health impacts of climate change in an effective manner. Ministry of Health should co-ordinate with other Ministries and agencies who work directly on climate change and related issues such as the Ministry of Environment, Meteorological Department, Geological Survey and Mines Bureau and the Disaster Management Centre together with the participation of other Ministries (e.g., Ministry of Education), Non-Governmental Organizations (NGO) and Community Based Organizations (CBO). This type of interaction is essential at the regional and global level as well.

Strengthening the country’s disease surveillance activities and networking of regional health offices to national level for rapid transmission of information on climate related health issues is another area that we should pay our attention on.