Making Public Servants Liable for PAYE Tax: Ending the Exclusive Exemption, but what Implications for Revenue?

• Extending PAYE (Pay As You Earn) tax to public employees can raise revenue by 23%, but simultaneous raising of the tax free threshold drops revenue by 40%

• Yet, restores private-public employee tax equity and helps expand the tax base

Sri Lanka began to impose taxes on income in 1932, and witnessed several amendments to these regulations over the years. Among these, one of the more prominent changes was in 1979 when public servants were made exempt from paying any income tax on their official salary emoluments. Over three decades have passed since this was introduced, and the issue emerged strongly in the national debate last year in the context of a new post-war budget, the severe strains on government finances, the fiscal tightening required under the IMF package, and the appointment of a Presidential Commission on Taxation to look at ways of increasing tax revenue and expanding the tax base. It became a key moot point in the context of the Government needing to broaden the tax base to bolster revenue, bridge the continuously high budget deficits of the recent past, and provide more elbow room for the post-war reconstruction and recovery efforts.

The announcement in the Budget 2011 presented in November, to extend the income tax ‘net’ to include public servants, is a decisive move towards broadening the base and re-introducing tax equity between public sector and private sector workers. This article takes a brief look at the historical context of the initial exemption, how the exemption affects government revenue, and makes a preliminary assessment of what the extension could do towards improving the country’s fiscal position.

With the liberalization of the economy in 1977, the government at the time, led by President J. R. Jayawardene believed that for post-liberalization growth to truly take-off, and for the country to capitalize on the new opportunities, a strong and capable public sector was a key. With this in mind, the tax-free status for government servants was granted in 1979 to compensate for the unattractive salaries compared to the private sector, and in the hope of putting a halt to the drain of talent from the public service to foreign countries, and to the private sector. However, since then, the validity of this policy has been questioned, in the light of the various pay revisions that have been granted to public sector workers. Various other incentives given to public sector employees such as vehicle permits, generous pensions, etc., have been argued to offer similar or more benefits compared to various extra-salary allowances enjoyed by the private sector. Moreover, private sector employees are often subject to performance-based pay schemes unlike public employees. Working harder is likely to bring higher incentives in the former unlike in the latter, and therefore the question arises as to whether it is fair to tax the extra income earned due to hard work.

Another criticism of the exclusive exemption was that it provides the opportunity for public employees to evade paying taxes on privately earned incomes, outside of their official emoluments, as they do not open tax files with the Inland Revenue Department citing the salary exemption as the reason for it. In many cases, these incomes can be a couple of times higher than the official salary, which in turn could make a public servant’s total earnings parallel to that of mid-level private sector employees, and often, even higher.

However, some refute these claims arguing that the tax exemption has been an indirect income benefit for government servants as salaries have not risen sufficiently and also helps to retain talent in the sector.

Gains to the Government vs. the People

The benefits of tax reforms are often two-fold, flowing to the government and the people. Governments gain by way of increased tax revenue while the people may gain through progressive tax distribution. 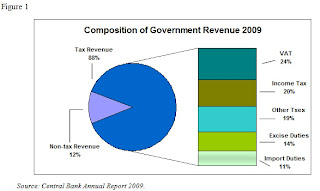 As per previous tax regulations (pre-budget), the tax-free annual allowance of an employee was Rs.300,000, and thus, all employees whose monthly taxable income (after making relevant adjustments to earned income based on Inland Revenue guides) exceeded Rs.25,000 became liable to tax. The public employees’ tax contribution was waived by the tax exemption, where a rough estimation according to Labour Force Survey 2006 indicates that tax contribution has been made only by the semi-government and private sector employees who have accounted for around 74% of all employees earning over Rs.25,000 monthly salary (Table 1).

With the new tax reforms, the government employees falling into the tax liable category, currently accounting for 26% of the labour force and thus far been excluded from income taxation, will become liable.

Impact of the Change – Preliminary Assessment**

The impact of including public servants in income tax on revenue generation and the number of newly tax liable employees can be examined using the data in the latest available Household Income and Expenditure Survey (HIES) 2006/07 and analysed using the statistical software STATA.

For the purpose of our analysis, we can look at three scenarios, using the data from the HIES 2006/07.

• Scenario A: What was the PAYE tax situation (number of persons and revenue generated) under the previous tax policy which exempts public servants from PAYE tax?

Moving from Scenario A to B, in addition to those liable under Scenario A, 11% of public sector employees are liable to pay PAYE tax. Under this scenario, the improvement on tax revenue is evident. The total number of tax liable employees increases from 162,364 to 244, 731 (a 51% increase), which in turn raises tax revenue from LKR 6.5 bn to LKR 8.0 bn (a 23% increase in revenue). Distributional analysis within this preliminary assessment further reveals that the distribution of tax contributions among all tax liable employees becomes more progressive, i.e., the rich paying a larger share relative to the poor, highlighting the positive impact of tax reforms on improving equality in taxation and income distribution.

However, according to the Budget 2011 announcement, the tax liable thresholds will also be revised, taking us to Scenario C. The tax free income threshold per month has been raised from LKR 27,000 to LKR 50,000 and tax rate bands have been reduced from 5%-35% to 4%-24%. Accordingly, only 3.5% of all employees are liable for PAYE taxes. Under this scenario, tax revenue falls dramatically from the initial LKR 6.5 bn to LKR 4.0 bn (a near 40% drop), and the number of tax liable employees falls from the original 162,364 to 148,080.

Hence it is clear that the tax policy reform announced in the Budget 2011 to extend PAYE tax liability to public sector employees, combined with the overall raising of the tax free threshold for all employees results in a decline in tax revenue compared to the status quo of the pre-Budget scenario. However, the key anomaly under the previous tax policy regime – the lack of tax equity – is corrected under the new policy. This provides a positive signal to private sector employees that they are no longer treated in a discriminatory manner with regard to tax liability. The question that arises, though, is will this positive signal incentivize more people to comply with taxes, as a key contention earlier by private employees was “why should we accurately declare tax liability, when public servants are completely exempt from tax?”

Additionally, under this reform, a key objective of the government will be achieved, which is expanding the tax base and ensuring that more people become compliant with their tax obligations to contribute to national development.

The key question, moving forward is, given the reduction in revenue with this proposed policy change, coupled with the reductions in corporate and individual income tax rates, can the government bridge the immediate drop in revenue buoyancy? Raising sufficient revenue to fund post-war reconstruction is a pressing need, and it will be interesting to see how these progressive reforms impact on it.

(This article is open for discussion at www.ipslk.blogspot.com)

*Anushka Wijesinha was Research Officer to the Presidential Commission on Taxation 2009-10.
**Research for this article is based on an ongoing study for the Poverty Monitoring, Measurement and Analysis (PMMA) project of the Poverty and Economic Policy Research Network (PEP-NET) funded by IDRC. The research team also includes Dr. Nisha Arunatilleke (Research Fellow – IPS) and Priyanka Jayawardena (Research Officer – IPS)