Half of the World’s Trade Travels through it, but are we Protecting it? 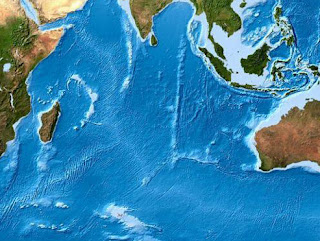 The Indian Ocean rim region, home to around one-third of the world’s population, possesses a significant strategic economic value. Nearly half the world’s container traffic and 70% of the total traffic of petroleum products is accounted for by the Indian Ocean. 60,000 ships transit through it each year. So, the geo-strategic significance of it is well established, and discussed extensively in strategic affairs forums. Yet, the environmental challenges facing the Indian Ocean, and the rim countries, often receive less attention.
Environmental issues can significantly affect the region’s economic activities and environmental stability. While the natural environment in the Indian Ocean is faced with a plethora of threats, this post takes a quick look at some of the critical challenges which need to be addressed. – ocean resources, climate change, bio-security, and marine pollution.
Key Challenge 1: Ocean Resources
The Indian Ocean possesses a range of valuable natural resources including sea minerals, coral reefs, etc. Coral reefs are under the threat of depletion due to global climate change, direct human pressures, and inadequate governance, awareness, and political will (Laipson, 2009). Coastal ecosystems and recreational services provided by them play an important role in tourism, fisheries, livelihoods of coastal communities, etc., in the rim countries. Therefore, degradation of coastal ecosystems can have negative impacts on national economies. The region also possesses enormous amounts of economically valuable mineral resources and energy resources (both oil resources and renewable energy resources) which remain less exploited. Utilization of these resources needs to be done collaboratively by the rim countries as such activities can have detrimental impacts on the marine environment. Additionally, territorial claims by the rim countries and related political aspects also have become important concerns in the recent past with regard to natural resources usage as well as conservation in the Indian Ocean region.
Key Challenge 2: Climate Change
The Indian Ocean region is highly vulnerable to the impacts of climate change. The region hosts a significant proportion of poor, living in areas highly vulnerable to various impacts of climate change. The countries have varying but limited capacity to cope with the impacts of climate change, which can come in the forms of extreme weather events, sea level rise, to name but a few. In addition, climate change is linked with other regional environmental issues – loss of biodiversity, for instance – which can have serious negative economic impacts on development in the region. Taking adaptive measures to face the impacts of climate change remains one of the top development priorities for Indian Ocean rim countries.
Key Challenge 3: Bio-security
Marine bio-security refers to the protection of marine environments from non-indigenous species, and this has direct implications on biodiversity in the marine ecological systems in the Indian Ocean. It has been found that invasive alien species (IAS)1 are becoming a significant threat to marine biodiversity, where ballast water2 is viewed as a major cause of their proliferation. However, comprehensive studies on bio-security are rarely found in the case of the Indian Ocean, and it is becoming increasingly important to assess the marine bio-security risks for Indian Ocean rim countries. Structured and transparent evaluation techniques are needed in dealing with the issues related to bio-security, both in ecological and socio-political perspectives, supported with knowledge and resources to properly inform appropriate actions (Campbell, 2009). Bio-security requires the cooperation of a range of actors including scientists, policy makers, law enforcement officials, etc., and therefore collaboration mechanisms as well as joint research and knowledge sharing on this subject at regional level is key.

The Indian Ocean region is also vulnerable to high levels of pollution caused by ocean dumping, waste disposal and oil spills as a significant amount of international trade takes place in the region’s waters. The wastes pose threats to the survival of marine organisms and consequently, on the marine ecosystem, on which millions of livelihoods depend. In addition, being bordered by fast growing economies such as India and China, as well as other East Asian economies, there is a high possibility of more industrial waste disposed to the ocean. Eutrophication of near-shore environments due to pollution from land-based sources and their run-off has impacted economic activities such as fisheries, tourism and also affected fragile ecosystems.

Way Forward: Greater Regional Cooperation
The twenty seven countries located on the rim of the Indian Ocean must bear in mind that they are affected not only by the economic significance of this ocean, but also the environmental challenges facing it.
When the environmental challenges are regional in nature, national level policies and strategies of individual countries alone are insufficient. Future actions have to take cognizance of the fact that environmental challenges are inherently interrelated and complex. There needs to be a regional level cooperation to deal with the environmental challenges which are common to all Indian Ocean rim countries. As at now, such challenges in are not adequately managed through regional policies, laws, multilateral agreements, or in the least regional collaboration by scientists and experts. The various issues related to the ocean environment are interlinked and caused by a complex of man-made and natural factors. Therefore, the formulation of regional policies and strategies has to be supported with comprehensive research which brings in actors from all relevant disciplines, from the entire region.
The UN Convention on the Law of the Sea is relevant to the issues regarding Ocean Sciences and Environment. The important features of the Convention includes navigational rights, territorial sea limits, economic jurisdiction, legal status of resources on the seabed beyond the limits of national jurisdiction, passage of ships through narrow straits, conservation and management of living marine resources, protection of the marine environment, a marine research regime and most importantly, a binding procedure for settlement of disputes between States. Collaboration among the states in our region is key to make the Convention operate effectively.

To address this regional challenge, we require regional solutions. The IOR-ARC (Indian Ocean Rim Association for Regional Cooperation) should take up this issue as a priority item in its future deliberations.
References
Campbell, M.L. (2009), “An Overview of Risk Assessment in a Marine Biosecurity Context”, Biological Invasions in Marine Ecosystems, Ecological Studies, 2009, Volume 204, V, pp 353-373.
Laipson, E. (2009), “The Indian Ocean: A Critical Arena for 21st Century Threats and Challenges” in (ed.) Laipson, E. and A. Pandya, The Indian Ocean Resource and Governance Challenges, The Henry L. Stimson Center.

[1] An invasive species is a species that does not naturally occur in a specific area and whose introduction does or is likely to cause economic or environmental harm or harm to human health. (http://www.invasivespecies.org/resources/DefineIS.html)
[2] Ballast water is water carried by ships to ensure stability, trim and structural integrity. (http://globallast.imo.org/index.asp?page=problem.htm&menu=true). Sea water is used for this.