The IPS research staff held an in-house discussion last week on the various proposals forwarded by the Budget 2011. This is the third in the series of posts containing some preliminary observations of the IPS researchers, and discusses the proposed improvements to school and university education. 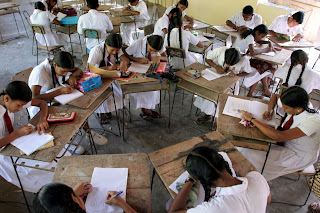 Many of the proposals are decisive steps in the right direction, towards transforming Sri Lanka into a knowledge economy, and positioning itself in the region and globally as a country with skilled, proficient, and talented workforce. They are consistent with the stated government policy of making Sri Lanka a ‘Knowledge Hub’.

This post contains some preliminary observations arising from some of the education sector proposals.

This proposal is an important one given the extensive inter-and intra-regional disparities in the school system, on school density and also physical and human resources. Most of the rural and remote schools lack educational facilities such as libraries, computer rooms, laboratories, as well as core facilities like electricity, water and sanitation. The IPS has previously highlighted this in Tilakaratna, et al (2009), titled “Educational Opportunities for the Poor in Sri Lanka: Assessing Spatial Disparities” (Chapter 4 in Economic and Political Empowerment of the Poor – Sri Lanka, CPD-SACEPS Monograph Series 3). It may also result in reducing the excess demand for a few well-facilitated schools. At present, children travel long distances to attend ‘good’ schools. Much of their childhood is spent on the road. Being able to attend a school close to home will give them more leisure time.

At present, there are only 698 (7.2%) schools having Advanced Level Science stream classes, out 9,662 Government schools in the country. As such, most of the children in less developed and remote areas do not get a chance of having a science education up to Advanced Level, even if they want to and have the ability to pursue their studies in science stream. This in turn has a negative impact on the numbers enrolling for science and engineering degrees in national universities. Arunatilake and Jayawardena (2010)*, for instance, show that access to science schools is highly inequitable in the country.

Therefore, we believe that this proposal will benefit a lot of children from poor families, who have
no access to such schools. However, having well equipped schools is insufficient. Schools need to be equipped with proper human resources too, i.e., qualified and motivated teachers, as it is a key determinant of the quality of education. This has been tried previously in Sri Lanka. We should learn from those attempts at upgrading selected schools. Emphasis should be given to upgrading schools to a certain level, than for distributing funds equally to 1,000 schools. Some schools may need more funds than others.

Shortage of qualified teachers is acute in remote areas, mainly for the subjects like English, Maths, Science and Esthetic Studies. Also, it may be necessary to consider suitable incentives for teachers working in rural areas to ensure a more equitable distribution of qualified teachers. This could include, for example, providing quarters to teachers serving in difficult areas, giving priority when selecting for training programmes, and granting scholarships for training abroad. Overall, the improvement of teacher facilities in schools in these areas should go parallel with the new proposals.

“A 3 year, LKR 3 million initiative to develop all state universities to project each with a core identity.
“A further LKR 600 million to transform Peradeniya, Moratuwa, Colombo, Sri Jayawardenapura, Kelaniya, and Ruhuna universities to become world class universities” “Presidential Awards System for state universities, to be assessed on their academic and research performance”

There has been a long felt need for improving universities in Sri Lanka, towards expanding the available talent pool. This is more relevant now, given the post-conflict economic opportunities opening up, and the Budget 2011 which places emphasis on private sector growth and employment creation.

The following were some other relevant comments raised during the discussion:

– A key to building a quality and robust post-secondary education sector is the introduction of a comprehensive and credible regulatory system governing universities and higher education institutions. It will ensure that existing as well as new private entrants into the sector conform to high standards and are not just ‘degree shops’. This has been correctly identified in the budget speech, noting “universities and higher education institutions must be regulated within a sound legal framework and under a strict supervisory mechanism. We cannot permit ‘educational shops’ to operate under the guise of educational institutions and universities”. This will also ensure that the investments made by middle class families (who are most likely to send their children to low cost degree awarding institutions) result in adequate returns.

– Increasing salaries for state university lecturers and academics together with greater incentives for research is essential to stimulate the sector. The incentives for research would improve the quality of education in the universities and would contribute to the development of many disciplines. Salary increases being linked to performance is also essential, and this too has been rightly identified in the budget. Experience from other countries suggests that salary increases that are not link to performance could lead to corruption as unqualified or under-qualified persons may use their influence to obtain university positions.

– Moreover, it will be important to consider revision of the salary schemes for university lecturers to equalize the salary differences of private and public sector higher education providers. This is
crucial to prevent creating a vacuum in national universities, which many fear would occur as more private higher educational institutions set up in Sri Lanka.

With the conclusion of the conflict in May 2009, there is a new thrust to foster reconciliation at all levels of society. This Trilingual Sri Lanka initiative can improve social cohesion and national integration, if properly implemented. With 1.2 million workers in the public sector, and public sector officials being the closest to the people in delivering public services, it is increasingly important to ensure that these officials are able to communicate with, and relate to, all ethnic groups they serve. Technology can also be leveraged to support this initiative, for example, by strengthening the 1919 call centre which provides information on government services in all three languages. Additionally, it may also be useful to employ a component of cultural training to go hand in hand with language training, to make this initiative holistic and ensure that public servants are not only trilingual, but also culturally sensitive and thus perceived as being more inclusive.