The IPS is collaborating with The Asia Foundation on their Local Economic Governance (LEG) project. This blog post captures some initial insights emerging from the ongoing field work.

After being shackled by the conflict for decades, enterprises in the Northern and Eastern Provinces of Sri Lanka have had little chance to grow, and are left with little in terms of ploughed back profits available for new investment. Promoting local entrepreneurs and requesting industrialists to undertake new projects and expansionary investments in the North and East will be a tough task. Critical to this is the issue of access to credit.

At a recent Private-Public Dialogue (PPD) convened by The Asia Foundation in Polonnaruwa in North Eastern Sri Lanka, we were able to discuss this issue with many local business leaders from the Eastern Province. They continue to voice their frustration about the difficulties in accessing adequate capital for their enterprises. On the need for better access to loans, a leading entrepreneur from the Trincomalee district remarked, “Eastern Province entrepreneurs lack capital due to years of conflict. For us to grow, we need to import capital [….] funds need to come from outside to bridge the gap”.

Following the end of the conflict in May 2009, many of the country’s top commercial and development banks have aggressively expanded in the North and East, opening up an array of new branches in the past year. However, their lending to private enterprises has been slim and slow. Most bank branches are largely engaging in deposit-taking and pawning activities. They appear to be extremely risk averse, despite borrowers having requisite collateral and title deeds. Many entrepreneurs noted that even when loans are approved, they are often as low as LKR 100,000 (around USD 900) – grossly insufficient for local business wishing to expand or undertake new ventures, and even for small-scale rice farmers looking to invest in agro-machinery like combine harvesters and mechanised threshing equipment. 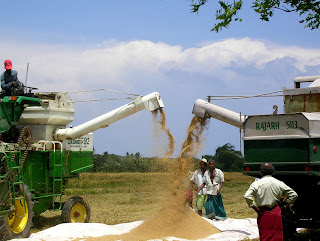 Caption: Many farmers in the Eastern Province are now keen to utilise higher technology techniques in their paddy fields. However, this equipment is expensive and requires easier access to capital. (image © Anushka Wijesinha 2009)

Based on information received end of last year, several banks are counterparts to concessionary lending lines provided by foreign donor agencies, for example, loans for SME development refinanced by Germany’s KfW Bank. However, it is contended that due to the inherent need to sell their own loan products, these banks placed limited emphasis on marketing these concessionary credit lines. Even with regard to special small enterprise loan schemes advertised by the Central Bank in the East last year, the entrepreneurs we spoke to remarked that these are taking time to get off the ground, at the grass-roots level.

In terms of interest rates applicable on loans, however, the developments are positive. Following a request made by the H.E. President Mahinda Rajapakse late last year, and policy rates being revised downward by the Central Bank, the cost of borrowing has dramatically reduced. This has also been supported by low inflation rates, seen recently.

However, local borrowers in the East remark that despite the 8-10 percent rates advertised, the applicable rates when they actually apply for loans can be as high as 14-15 percent. They attribute this to what they termed “hidden interest rates”, where various add-ons are applied to the basic rate – the computations of which is not easily understood by local borrowers.

This brings us to a further important constraint in access to credit in conflict-affected areas – the low level of financial literacy among borrowers. We observed that they are often unable to wade through the complicated formulas and calculations for loan products, find it difficult to understand the nuanced “small print”, and as a result often get a raw deal. Many recorded their frustration at the “lack of transparency” of the banks’ lending practices, insisting that more awareness needs to be created, and rules need to be simplified.

The financial literacy issue extends also to the limited capacity of business owners to produce book-keeping records and accounting requirements of a standard acceptable to managers of local bank branches. Additionally, many businesses looking to venture into new projects or expand existing ones find it challenging to produce business plans to convince bank managers of their borrowing needs. Solving this problem must be addressed in several ways: 1) improving the capacity of local business owners to produce credible and attractive businesses plans; 2) expanding the provision of business development service (BDS) to assist local entrepreneurs in this exercise; and 3). educating local branch managers on evaluating SME business plans in conflict-affected areas with a different mindset to regular loan applications. 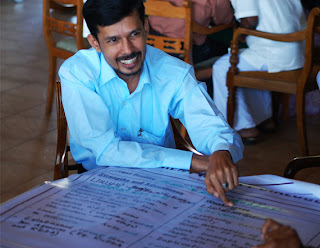 Caption: A participant at the PPD discusses strengths and challenges of post-conflict economic development in the Eastern Province. One of the clear issues that emerged was that of insufficient access to financing for entrepreneurs. (image © Anushka Wijesinha 2010).
Growing indigenous businesses and mobilising their unique strengths ought to be a key focus in a post-war economic recovery strategy. For this, enabling better access to the credit financing they require is crucial. We need to analyse more carefully the demand and supply constraints that exist in this area, and find durable solutions collaboratively. The Polonnaruwa PPD did make strong headway towards this, with participants agreeing on a mechanism to approach their local bank branches and regional banking heads to engage in a much-needed dialogue on how to ease up the credit access for their local enterprises to grow.