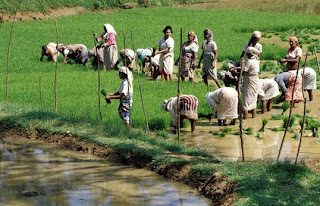 Credit Sanjeewa Siriwardana
The second article in the “Fiscal Imperatives” series deals with another contentious transfer programme, the fertilizer subsidy. In 2009, the fertilizer subsidy accounted for 3% of total government expenditure and 0.6% of GDP. At present, the subsidy is given out without any targeting mechanism and a large proportion of the benefits are captured by relatively wealthy farmers, whilst creating a burden on the public purse.
Background
Fertilizer subsidies have been widely used in Sri Lanka since 1962 with the intention of encouraging the use of fertilizers and off-setting the effects of low crop prices and high costs of production. It initially covered only paddy but was extended to all other crops in 1985. The government withdrew the fertilizer subsidy in 1989, but re-instated the scheme in 1994. In 2005, the fixed rate of subsidy was Rs. 23,000 per metric ton of urea. Since then a fixed price scheme has been utilized where the price of a 50 kg bag of urea has been fixed at Rs. 350 regardless of the world market price. Fertilizer subsidies continue to drive up recurrent expenses, particularly in the wake of higher global oil prices which pushes up the market price of fertilizer. The fertilizer subsidy as a percentage of market price exceeds 90 per cent in all three major fertilizers.
Fertilizer Subsidy with respect to the Market Price

From the societal point of view, the fertilizer subsidy may have certain benefits for the poor farmers such as higher agricultural output, incomes, and food security. However, from an economic point of view, an efficient subsidy must ensure that the resulting yield increase more than compensates the increase in cultivation cost, lowering the unit cost of production. It remains
doubtful whether induced fertilizer application due to the subsidy will result in a greater yield increase. For example, while fertilizer application rates more than doubled among rice farmers over the period 1983-2005, average yield increased by only about 9 per cent.
Yearly Fluctuation of Rice Production, Yield, and Fertilizer Use

At present, the fertilizer subsidy is given as a blanket subsidy to all the paddy farmers without utilizing a proper target mechanism *1 . Whilst the fiscal implications of such mis-targeting are evident, this has also created a lot of problems such as over application, which results in nutrient
imbalances in the soil causing long term adverse impacts on soil fertility (see Figure 1). At the same time, improper and excessive fertilizer application, particularly nitrates and phosphates, have adverse impacts on human health and on the environment. For example, fertilizer run off tends to leach away into down stream water bodies causing human ill health and deposition of nitrates and phosphates in water bodies, or Eutrophication, causes excessive algae growth resulting in oxygen depletion, water contamination and fish mortality.
Figure 1: Annual Nutrient Consumption 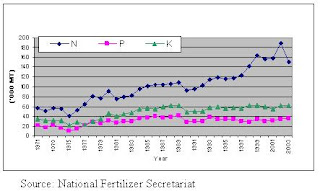 Furthermore, stimulation of fertilizer use for unprofitable and uneconomical ventures – i.e., diversion of scarce resources from other productive investments by the fertilizer subsidy, has adverse impacts for the long term sustainability of the economy. The lack of an effective targeting mechanism contributes to the problems mentioned above.
Research has shown that small scale farmers are economically inefficient in paddy production comparedto the large scale farmers (Weerahewa et al, 2003, Thibbotuwawa and Weerahewa, 2004 *I). Thus one could argue that support ought to be targeted only at vulnerable smallholders, thus focusing on household food and income security. At the same time, it could be argued that given the fact that fertilizer makes up a relatively small proportion of the total costs faced by farmers (less than 5 %, Wijewardena, 2009) *II , is it worth spending so much on the fertilizer subsidy?
The lack of targeting has become a serious concern in the present context since a larger proportion of the subsidy is captured by wealthier rice farmers regardless of the objective of benefits accruing to resource poor small farmers. *2 A large proportion of farmers do not receive the fertilizer at the subsidized price and a substantial amount is sold on the black market as a result of the weaknesses in targeting, combined with rent seeking at various stages in the distribution chain.
Some Measures to Improve Targeting
• Use input vouchers that can be redeemed at local retail stores rather than direct distribution in order to maintain or improve the capacity of the private sector input delivery system.
• Involve a wide range of fertilizer importers, wholesalers, and retailers in the input voucherscheme, even if it entails additional logistical costs. Providing tenders to only 2-3 firms to import fertilizer can entrench their position in the market, restricting competition.
• If the objective of improved targeting is to increase total output, then the priority is to ensure that inputs reach farmers who can use them efficiently and on a large enough area to generate significant gains in total output. Evidence indicates that a high proportion of non-poor farmers are able to acquire fertilizer through markets so spending scarce government resources to provide them with discounted fertilizer will largely substitute subsidized fertilizer for commercial fertilizer, adding relatively little to overall fertilizer use or crop output. In some cases, small farmers may also use fertilizer more efficiently than larger farmers.
• If the objective is to alleviate poverty, or to overcome liquidity constraints for poor farmers who would otherwise be unable to purchase fertilizer, then it must be possible to identify poor farmers, and socially acceptable to channel vouchers to them, at a reasonable cost including leakage
• If effective targeting does not seem feasible or achievable at an acceptable cost, then a small universal voucher programme would be worth considering. For example, a programme designed to provide all farmers with inputs for 0.2 ha would primarily benefit small farmers while at the same time limiting the displacement of commercial purchases by larger higher-income farmers, some degree of which might occur anyway under a programme that fails to target small farmers successfully.
• Address infrastructure and input supply constraints as well as improving procurement efficiency to reduce cost of delivery (joint procurement arrangements and regional procurement hubs). This will help achieve the goal of enhancing farm-level fertilizer supplies at a lower price. Facilitating the movement of fertilizers across borders (removing customs duties and export taxes) will also contribute to overall improvements in supply efficiency.
• Strengthen farmers’ effective demand for fertilizer by making fertilizer use profitable and by building durable input markets and output markets that can absorb the increased output without
gluts that depress producer prices.
• Increase fertilizer use efficiency by promoting farmers’ use of improved crop management practices such as crop rotation with legumes, changes in density and spacing patterns of seeds and placement of fertilizer and seeds at planting, improved soil organic matter, early planting, timely weeding, applying fertilizer in response to rainfall.
Conclusion
While it may be argued that the fertilizer subsidy scheme moves the economy towards equity and food security from an economic development perspective, there still remains some ambiguity on whether it can be justified. Nevertheless, a withdrawal of the subsidy may create serious problems to small scale farmers, particularly for those engaged in the paddy sector. Thus, what needs to be done is to manage the fertilizer subsidy more effectively and efficiently, targeting only the farmers who are in need of the subsidy, i.e., resource poor farmers who are in poverty and who do not have enough purchasing power to buy fertilizer at market prices or acquire credit to do so. Through improved targeting of subsidies such as the fertilizer subsidy, it will be possible to reduce government expenditure on recurrent items. Whilst there are no available estimates on the exact amount that is lost due to mis-targeting, if targeting can save even one third of the fertilizer subsidy, this would reduce government expenditure by 1%. That said, it should be emphasized that any subsidy is merely a short term policy goal and what needs to be done is to place emphasis on developing infrastructure, agricultural R&D, and technology infusion as long term measures for improving productivity.
*1 Recently introduced a fertilizer subsidy scheme for small holders in tea and rubber sectors