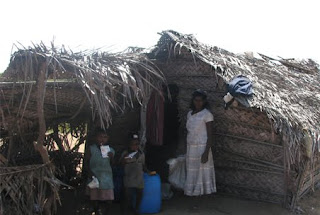 Arguably, one of the key constraints to the medium term stability of the Sri Lankan economy is the fiscal deficit. Whilst measures are being taken to address tax revenue aspects of the fiscal situation through the Presidential Commission on Taxation, there needs to be a simultaneous emphasis on curtailing expenditure. The major components of recurrent public expenditure are distributed between transfer payments, interest payments and salaries. In the series “Fiscal Imperatives” we look at some of the most pertinent challenges in curtailing recurrent public expenditure. The first article in this series will deal with targeting issues related to the major income transfer scheme, the Samurdhi Programme.

In recent years the Sri Lankan government has been spending around 4 per cent of GDP on transfer and subsidy programmes – key components of its poverty reduction strategy. Some of these programmes involve direct cash and/or in-kind transfers to the poor. Transfers to households accounts for a substantial proportion of government recurrent expenditure, which was 17 per cent in 2009. The Samurdhi programme is considered to be a major transfer programme dealing with poverty reduction and equity objectives, accounting for 0.2 per cent of GDP.

However, it is often argued that some government transfer programmes lead to greater inequality because high income families receive a disproportionately large percentage of the benefits. Therefore the need for more effective targeting of these transfer programmes has dominated the discourse on this subject in the present milieu.

3. Targeting Issues in the Samurdhi Programme

Since its inception in 1995, Samurdhi programme coverage has increased to 1.6 million households by the end of 2008 (Central Bank Annual Report 2008). As is evident in Table 2, a significant percentage of each income decile receives Samurdhi benefits. Beneficiaries placed between the 3rd and 10th income deciles find themselves above the current national poverty line, which lies within the 2nd income decile. Whilst the total number of Samurdhi beneficiaries has declined by around 9 per cent between 1996 and 2007, contrary to what is expected, i.e., a greater decline in the richest income decile, both the lowest and the richest income deciles have shown a similar percentage point decline (17 per cent). Therefore, simply reducing the number of Samurdhi beneficiaries is not a comprehensive solution to the targeting errors inherent in the Samurdhi programme. 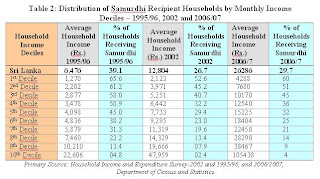 Moreover, the number of Samurdhi beneficiary households is much greater than the number of poor households in all districts (see Table 3). Consistent with Glinskaya (2000) *1 , it is evident that the Samurdhi programme contains an inclusion error. He points out that at the central level, the allocation of Samurdhi resources across provinces is efficient – i.e., the poorest provinces receive the largest share of the national Samurdhi budget. It is evident then that the targeting issues arise at the grassroots levels. 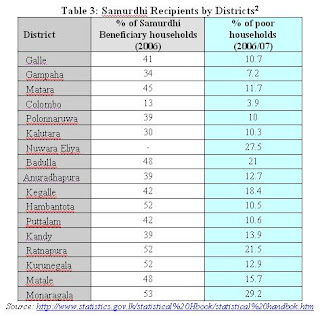 Aryaratna and Ravisingha (2009) *3 identified biasness of grassroots level officers, Samurdhi Development Officers (SDOs) as one of the major reasons for targeting errors. SDOs who selected Samurdhi beneficiaries have given priority to personal relationships rather than the Samurdhi eligibility and exit criterion *4 . On the other hand, the targeting procedure of the Samurdhi programme has been influenced by local political patronage, particularly at the grassroots level as many of these officers are political appointees. Ranathunga (2006) states that beneficiary selection was not successful due to political and other personal interventions though the selection criteria itself was sound. This indicates that failures are not in the concept but in the implementation procedure.

4. Some Reform is Under Way

Encouragingly, the government is now adopting a participatory approach (Family Classification Methodology – FCM) in the beneficiary selection procedure. Under the new approach, the SDO convenes a public meeting with the entire village and explains the indicators *5 and selection criteria. Villagers are then free to rank themselves as destitute, chronically poor, poor, medium income, and non-poor, based on those selected criteria. Villagers are ranked by themselves in a public meeting where most of the villagers are familiar with the assets ownership of their neighbours i.e. land ownership and housing conditions. As a result, the beneficiary selection procedure is transparent and the problem of asymmetric information will be minimized. Chronically poor and poor are the two groups who are eligible for Samurdhi benefits. This targeting procedure is carried out with minimum intervention of ground level government officials. The Samurdhi Disaster Management Household Survey showed that the FCM has excellent potential to reach the neediest households and a systematic implementation of the FCM can provide large dividends by significantly improving the targeting performance and thus cost effectiveness of Samurdhi transfers.
……………………………………………………………………………………………

*3 Aryaratna, I. and J.Ravisingha (2009), “Helping the Poor Cope with Crises: The Role of Samurdhi’, Proceedings of the conference on “Protecting the Poor in Sri Lanka in Crisis & Beyond”, Ceylon Continental Hotel, Colombo.

*4 In 1999, the eligibility criterion has been increased up to LKR 1500 (combined income) per month from LKR 1000 in 1998. When a household’s income exceeds LKR 2,000 and remains as such for more than six months or when a household member finds employment, the household must exit from the programme.