Conference on Ten Years of the Indo-Lanka Free Trade Agreement 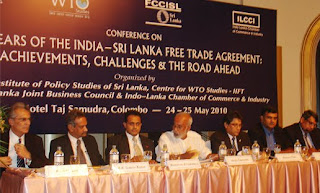 A conference to review and critically evaluate the first ten years of implementation of the Indo-Lanka Free Trade Agreement (ILFTA) was held in Colombo recently. The Conference titled ‘Ten Years of the Indo-Lanka Free Trade Agreement’ was organised by the Institute of Policy Studies of Sri Lanka, the Centre for WTO Studies – India, the India-Sri Lanka Joint Business Council and the Indo-Lanka Chamber of Commerce and Industry, and took place on the 24th and 25th of May. The objective of this conference was to review the performance of the ILFTA, assess the benefits that have resulted, and also examine the pitfalls in the agreement where improvement is needed.
Expert reviews and informed evaluations of this nature are necessary in order to improve upon existing trade policy measures such as the ILFTA to ensure that they fulfil their role in contributing to national development objectives.

Given the importance of incorporating a wide range of stakeholder views to inform trade policy formulation, the conference provided an opportunity for the private sector, government and academia from both India and Sri Lanka to exchange views on the performance of the ILFTA. At the same time, the conference created the space for dissemination of research findings on the ILFTA along with expert views and practical experiences of users of the FTA among a wider public audience, thereby contributing to the broader public debate on trade policy issues.

The first day of the conference focused on an ex-post assessment of the ILFTA, reviewing the objectives of the Agreement and the economic outcomes in the first ten years of implementation. One of the key attractions of the agreement for Sri Lanka was to enhance export market diversification, thereby reducing reliance on traditional markets in Europe and the United States and tapping into the fast-growing Indian market. During the conference it became clear that in the first five years of implementation, whilst exports from Sri Lanka to India had grown over eight fold, this was dominated by a few items, primarily vanaspathi and copper. As exports of these products came to a halt by 2009, Sri Lanka’s exports to India declined. In 2009, Sri Lanka’s exports to India were US$ 322 million compared to US$ 56 million in 2000.

Nonetheless, several exporters have succeeded in making inroads into the Indian market including in sectors such as furniture, garments, ships, animal feed, rubber gloves, rubber tyres, food products, and electrical machinery among others. Furthermore, products such as MAS’ Amante label have succeeded in capturing lucrative niches in high end consumer markets in India, and Colombo Dockyards has succeeded in outbidding established Indian firms in major ship repair contracts. Somi Hazari of FICCI went on to say that the quality of some of the Sri Lankan products has “set new benchmarks in Indian industry”. It was also pointed out that several small-scale exporters, such as strawberry producers, have begun to take advantage of the FTA in more recent months.

At the same time, Indian imports have grown substantially in the first decade of implementation of the ILFTA, but the bulk of these imports do not receive preferential tariffs under the ILFTA since they are in Sri Lanka’s negative list. These include products such as crude oil products, vehicles and parts, sugar and metals. So it was made clear in the conference that while Indian exports to Sri Lanka were growing regardless of the FTA Sri Lankan exports to India, although have been somewhat slow to take off, have made inroads into the Indian market via the FTA as envisaged at the outset of the Agreement.

Whilst recognising the positive outcomes of the ILFTA, there were several areas where the Agreement has failed to live up to its potential. Many Sri Lankan exporters have found it difficult to compete with local Indian producers due to the state taxes that are not liberalised by the FTA. It was however pointed out by Vikram Misry, the Deputy High Commissioner for India, during the conference that, “a proposal for a Goods and Services Tax is in advanced stages of consideration by the Government”. Such a unified tax system would help deal with the situation of a multitude of state taxes. As pointed out by the former Director-General of Commerce, K.J. Weerasinghe, there also remain problems relating to non-recognition of standards in some cases, and limitations in customs cooperation that create obstacles to trade between the two countries,. These issues have not been dealt with fully under the FTA.

In the early stages of the FTA, the imposition of quotas on key export products from Sri Lanka such as pepper and vanaspathi undermined export performance and investor confidence at the time. Furthermore, port restrictions and stringent rules of origin requirements severely restricted exports of products such as tea and garments in the first few years of implementation. Santosh Jha, Economic and Commercial Counsellor at the Indian High Commission, pointed out that there were also concerns in India about the plethora of para-tariffs that are imposed in Sri Lanka which are not dealt with by the FTA. Whilst many of these issues have now been resolved through negotiations, they have contributed to limiting the performance of the FTA in its first decade of implementation.

Another feature of Indo-Lanka trade disputes is the regular reference to non-tariff barriers, but there has as yet been no systematic survey of existing NTBs between the two countries. Kulatunga Rajapakse of the Ceylon National Chamber of Industries (CNCI), for instance, argued that the level of value-added products entering the Indian market remains limited due to the persistence of NTBs. The need to first identify and then systematically eliminate NTBs was highlighted as an important step in improving upon the existing FTA. One of the key messages of the conference was the importance of institutionalising regular meetings of trade officials from both countries to facilitate the process of identifying and eliminating trade disputes between the two countries. Greater cooperation between customs agencies and the pursuit of mutual recognition agreements in key areas was also emphasized by both the business community and government officials.

The final sessions of the conference looked at the future directions of Indo-Lanka trade. Several eminent business personalities and government officials participated in these panel discussions. The importance of building brands to ensure competitiveness in the Indian market was emphasized along with the need to engage in joint ventures to get pass some of the early difficulties. This view was echoed by the Chief Guest, Dr. Sarath Amunugama, Deputy Minister of Finance, in his inaugural address. Ashroff Omar, CEO of Brandix, highlighted the importance of taking advantage of India’s comparative advantages that are not available in Sri Lanka. Making reference to the massive textile park set up by Brandix in India, he explained the advantages of scale available in India in terms of land and human resources, which when combined with Sri Lankan expertise in design and other forms of value addition, captures the best of both worlds and helps create a competitive product.

There was strong stakeholder participation throughout the conference including representation from key private sector chambers such as the Ceylon National Chamber of Industries, National Chamber of xporters, Federation of Chambers of Commerce and Industry of Sri Lanka, the Ceylon Chamber of Commerce and the National Chamber of Commerce of Sri Lanka. Major government departments such as the Department of Commerce, Ministry of Trade, Board of Investment, Export Development Board and the Ministry of Industrial Development were represented in the conference as well. The conference was also open to the general public upon prior registration, and several members of the private sector, academia and civil society participated in the deliberations in this capacity.
Tags: Asia International Trade
Related Articles