Can BRIC Lead Us Towards a Greater Global Financial Voice? 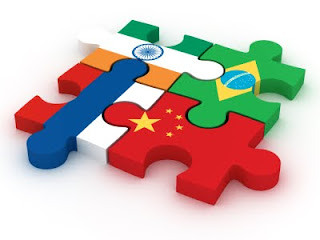 In April, the leaders of the BRIC nations met in Brazil’s capital Brasilia, ahead of the G20 summit in Canada and the IMF Spring meetings in Washington. While this was not a gathering on the scale of the G-8, G-20 or even the G-15, the summit was important in signalling to the world that the BRIC nations are a force to be reckoned with and are keen on giving leadership to the reforms of the global financial system that need to take place. Indeed, the group has come a long way since investment bankers at Goldman Sach’s first coined the term in 2001, and have moved beyond just a catchy acronym to become an international economic platform.


A louder voice for the developing world

The BRIC grouping consists of the world’s four largest developing countries, Brazil, Russia, India and China (BRIC), who have shown resilience during the global economic crisis, and are leading the recovery out of it. What’s interesting coming out of the summit, are the pledges by these increasingly influential global powers to lobby the international agencies hard for a greater voice for their countries. This could, eventually, help developing countries as a whole to rally round the BRIC bloc, link up productively through it’s G-15 group, and find a stronger voice in the global economic arena.
This has implications for smaller developing economies like Sri Lanka too. Without a stronger ‘South-South’ cooperative voice, Sri Lanka has little platform to air its concerns and seek changes. Despite being totally disassociated with the initial financial crisis, Sri Lanka was badly hit by the global downturn that followed, and therefore has a strong desire to see the developing world gain a stronger voice in the global economic arena.
Global banking reform

However, for this, the BRIC countries need to find a more united and coherent voice, particularly when calling for a reform of the global financial system. Analysts have noted that if it wishes to truly influence the global economy, the BRIC countries need to come up with more detailed and feasible reform plans. These could then feed into on-going discussions on global financial architecture reform. However, in this endeavour an immediate point of contention could be the IMF’s proposed global ‘banks tax’ intended to stem risky excesses by financial institutions and thus prevent a collapse like in 2007/08. This is likely to be heavily contested by emerging economies whose financial institutions did not develop, or deal heavily in, the exotic derivatives instruments that those in developed economies did.

Additionally, one of the key reform areas that BRIC is pushing for is the global aid structure. BRIC nations are spearheading the calls for a substantial shift of voting power in favour of emerging market and developing economies, a category which Sri Lanka belongs to. The debate over increasing the ‘share of voice’ of developing economies in the international financial and aid architecture (led by the IMF and World Bank) has been a long and tedious one, and continues unabated. The key demand is that they be given more voting power and greater participation in decision making relative to their weight in the global economy. Under the current status-quo, this is granted according to the economy’s size and/or contribution to the aid finance pool. Despite their ever-growing dominance in the world economy, the BRIC countries together enjoy only around 9.6% of the IMF’s total votes, while the USA enjoys 16.7%. The G8, on the other hand, which consists of the world’s 8 most developed economies plus Russia, enjoys 47.8% of the total votes. 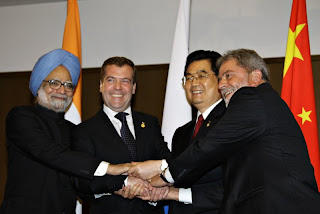 Following on from the discussions at April’s BRIC meeting, India has made further indications that it aims to voice the concerns of developing economies. At the ongoing 14th G-15 summit this week, India called for a comprehensive reform of the international financial institutions to make them more inclusive. This comes within a month of the World Bank approving an enhanced voice to developing nations, whereby India’s voting rights in the Bank rose from 2.77% to 2.91% and China’s from 2.91% to 4.42%. This makes India the 7th largest voice in the Bank in terms of voting share, behind the US, Japan, China, Germany, France and UK. Sri Lanka, which just assumed the chair of the G-15, emboldened by the positive moves, has called for the G-15 to engage more closely and productively with the G-8 group of rich nations in order to see the proposed reforms materialise. This will be important for this group of developing nations which Sri Lanka is part of, and which boasts over 1/3rd of the world population, to latch on to the debate on reforms, and not merely be an eventual recipient of the proposed changes.

What could limit the charge of the BRICs?

However, it remains to be seen as to how much broader cooperation, beyond basic trade cooperation and on reform proposals, can really be achieved by this bloc moving forward given the clear differences in the structure of the four countries (unlike, say, the majority of the Eurozone nations) which may expose the limitations of the BRIC. Politically, too, the differences are very evident. India is the largest democracy in the world but suffers from internal strife and threats from neighbours, China is proud of its communism, but has somehow embraced capitalism in its ultimate form and Russia hasn’t fully managed its political transition, but boasts a small, highly literate workforce and rich natural resources. Meanwhile, Brazil outclasses the other 3 by being a political democracy, sans insurgents or internal conflicts, exports more oil and arms than Russia, is perceived as being the most investor friendly, but lags behind on corruption indices. A further telling sign of the disparity is the fact that out of the US$3 trillion in foreign reserves held by the BRIC group central banks, the majority of it is China’s. Equally telling, maybe though, is that this US$3 trillion of these four countries alone amounts to over 40% of the world’s foreign reserves.

Yet it is clear, that if the BRIC is successful in its efforts to push for an increase in the ‘share of voice’ in the global financial institutions like the IMF and World Bank, and is successful in leading the way in global financial system reforms, it will signal an important turning point for all emerging market and developing economies. It will signal a departure from developed-country dominance in global economic decision-making.

Brazil, Russia, India and China, which host 42% of the world’s population, was responsible for nearly 20% of the world’s GDP in 2009, up from 16% a decade earlier. Despite the global crisis which saw developed economies shrinking, growth rates in Brazil, India and China were above 5-6% in 2009 and their economies continue to be structurally sound. Russia’s performance, though, was less impressive with its economy shrinking almost 8% in 2009, the biggest decline since the breakup of the Soviet Union in 1991 (a 4.8% growth is predicted this year, however). It’s over reliance on oil and limited economic diversification leaves it vulnerable to exogenous shocks, like that of the commodity price crash of 2008.

Nevertheless, several BRIC countries’ depend heavily on key European markets, several of which are showing signs of severe domestic financial stress. Many have already been red flagged by ratings agencies and their sovereign debt has been downgraded. Some, in particular Greece, have begun aggressively cutting pay, benefits and welfare schemes which will no doubt have an impact on the consumer spending of its people, and thereby a reduced demand for imports. For our next post in Global Perspective we will take a quick look at the European crisis and glean some lessons for Sri Lanka as well as assess the potential downside risks of a fallout in the Eurozone economy.

(This is the 2nd article in our ‘Global Perspectives’ series. Click here to visit the first one, “Challenges to the Liberal Global Economic Environment”: http://ipslk.blogspot.com/2010/01/challenges-to-liberal-global-economic.html)