By Deshal De Mel – Research Economist – IPS
In the final quarter of 2009 Sri Lanka’s economy continued to recover from a poor economic performance in the first half of 2009. The 6.2% fourth quarter growth signaled a return to pre-crisis growth levels and the economy has thus completed a near perfect V shaped recovery during the year. Nonetheless it would be imprudent to be complacent, since there remain underlying downside risks, both internal and external that could threaten the sustained growth of the economy in the short to medium term. In this post we analyse the drivers of growth in the fourth quarter of 2009 and assess the near term outlook for the economy. 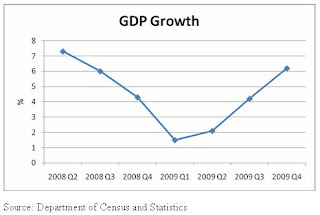 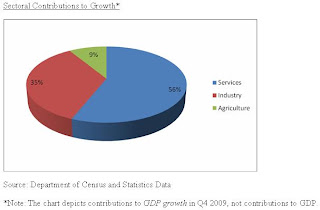 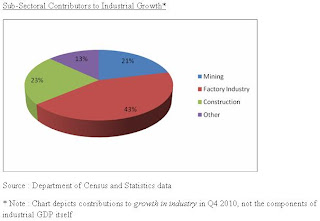 Mining accounted for 21% of the growth, factory industry accounted for 43% of growth (55% of factory industry growth was due to growth in food and beverages) and construction contributed 23% of the growth. It is noteworthy that textiles and garments continued to contribute only a small component of growth – and this too could reduce come Q1 2010 as garment exports have contracted significantly early in the year.
Continued Growth in Services
Contributions to growth in services were fairly evenly spread, with transport and retail continuing to grow rapidly from a relatively low base in Q4 2008 and also driven by the expansionary impacts of fiscal and monetary stimulus throughout 2009. 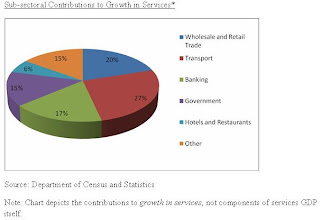 On the aggregate, Sri Lanka’s economy continues to grow in a satisfactory manner as it recovers from the significant downturns faced between Q4 2008 and Q2 2009. Overall economic growth for 2009 was 3.5%, again creditable given the weak performance in the first half of the year. Nonetheless, despite these positive signs, there remain underlying downside risks that arise primarily from the fiscal position. The budget deficit of 9.7% continues to pose medium term threats to inflation (6.3% in March 2010) and interest rates, particularly as private sector borrowing increases with continued economic recovery. Furthermore, failure to effectively tackle this problem sends weak signals to investors, particularly if the IMF continues to delay disbursements due to fiscal concerns. In the external sector as well there remain risks despite recovery in the global economy. The possibility of contagion of fiscal crises in Greece, Portugal and Spain threatens to destabilize the global economy. Europe remains a key market for Sri Lanka and continued economic stress in Europe will undermine Sri Lanka export performance. This issue is compounded by the loss of GSP plus, the effects of which have already been seen with garment exports declining by 28% in January 2010. In the short term however economic growth can be expected to continue in Sri Lanka well into 2010 on the back of post-conflict recovery and the lagged effects of expansionary fiscal and monetary policy.
Tags: Macro
Related Articles