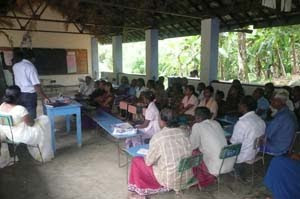 The Gemidiriya (village strength) Community Development and Livelihood Project was initiated in 2004 in response to the Sri Lankan government’s Poverty Alleviation Strategy of 2003. The project is based on the community-driven development (CDD) model which aims to improve the livelihoods of rural communities through the formation of self-governed local institutions, so as to enable greater decision-making, resource mobilisation, monitoring and evaluation of sustainable investments at the village-level. Currently, there are three state initiated poverty alleviation and rural development schemes operating in Sri Lanka: Samurdhi, Gama Neguma and Gemidiriya. Gemidiriya has received funding from the World Bank for a period of 12 years, conditional upon its successful implementation. Gemidiriya presently covers 7 districts (Badulla, Ratnapura, Hambantota, Monaragala, Matara, Galle and Polonnaruwa) with implementation in 1036 villages. This post will assess the efficacy of the Gemidiriya Project and examine its suitability as a model for future poverty alleviation schemes.

The Distinctive Framework of Gemidiriya

Village organisation at the centre of activities:

The Gemidiriya model functions at different levels, beginning with the Gemidiriya Foundation at the national level, District Operations Unit at District level and Field Operations Hubs at zonal level. The centre of the model is the village institution, where all activities converge. 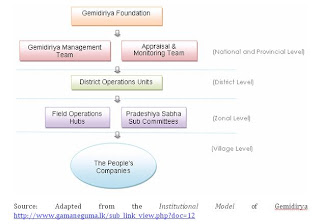 The People’s Company: The Concept of a Separate Legal Entity
The village community registers under the Companies Act to form a separate legal entity as a People’s Company that will abide by all the legal requirements under the Act. As a result, all stakeholders of the organisation are forced to align themselves towards common goals, and are compelled to collaborate to a greater extent. This is contrary to a system of individual incentives, wherein self interests would naturally take precedence over common gains.

The concept of self governance by the community is central to the institutional structure of Gemidiriya. These small institutions are created by the villagers themselves, and are run by a board of directors consisting of members of the community. The companies consist of pre-defined committees comprised of only members, to oversee different functions of the company, under clearly set goals and rules. It is important to note that there is no government representation in the People’s Companies, which makes these organisations completely autonomous units. Gemidiriya officials are only facilitators or external evaluators.

The community members evaluate, plan, implement, and monitor the company activities. A number of positives emerge from transferring authority to the grass-roots level. The model accommodates the views of those at the site of project implementation (the villagers), which brings in new, and often more practical, perspectives. Contrary to the other two programmes, funds to the company passes from the centre directly to the Gemidiriya foundation, which in turn finances the ‘People’s Companies’ under a financing agreement. This model also increases accountability, since proposals for different projects originate at the People’s Companies, which centralises ownership.

In order to further protect autonomy at the village-level, the institutional structures and operational framework of the Gemidiriya model emphasises facilitation by the overseeing body, as opposed to actual involvement in decision making. Facilitation comes in the form of a hub system, wherein representatives of the Gemidiriya Foundation (facilitators) offer advice and guidance to the directors of the People’s Companies. By minimising the chain of command, the model limits room for rent seeking.

Gemidiriya requires high and strict community contribution in its projects compared to others. The 10% financial contribution by the community on infrastructure projects, on top of a 20% labour contribution gives a share of ownership rights of projects to the community. Further, unlike in the case of Gama Neguma programme, where contracts are awarded by the District Secretariat, Gemidiriya village company undertakes the projects and has the authority to evaluate and maintain the quality of work.

Gemidiriya mobilises the young community members as paraprofessionals who are trained and used in improving not so well doing companies and in introducing Gemidiriya to new villages. This is a novel approach in poverty alleviation in Sri Lanka.
Federation of companies
Efforts to increase the marketability of village companies are embarked on through the formation of federations. A cluster of about 7 village companies form a district federation. Federation of companies enhances the negotiating and bargaining power of the companies. The companies are better able to negotiate for commodity prices through the federation and strengthen the robustness of the federation to external competition. The greater communication envisaged by the second phase of the project will further facilitate the formation of these industrial clusters. 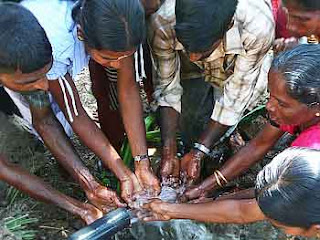 Ensuring sustainability
The degree of success of the programme depends on the socio-economic and political characteristics of the village. The success of companies heavily depends on the characteristics of the community leadership. If the leaders are endowed with skills, committed and accepted by the community, the companies become active, successful and have greater fund regeneration that leads to sustainability. The companies do not reach the desired levels in the presence of community discord and high political and administrative resistance. This questions the replicability of the programme universally for poverty alleviation. Hence assessing the replicability and taking appropriate efforts in ensuring sustainability is critical before commencing the programme in villages.

September 10, 2009 saw the World Bank’s approval of a $75 million IDA credit for the continuation of second phase of Gemidiriya. The second phase of the model will partly focus on the competitive aspect of villages by addressing issues of poor connectivity to regional markets. This shall be achieved by the greater provision of interlinking roads between project villages and markets.

Management of the roads is another aspect of the second phase that requires attention. The Foundation will have to decide how these are to be maintained. Potentially this responsibility could be passed onto the villages, however, if both property rights and maintenance are poor, the benefits of investing into infrastructure may fail to be realised. Further to this, the foundation will have to be clear about how the provision of roads is to be viewed; as a private good or a public good? Will the greater interconnectivity lead to utilisation by people outside of the project and, if so, is this desirable?

If there is greater integration between Gama Neguma and Gemidiriya (in fact in some cases Gemidiriya is now referred to as Gama Neguma) as proposed for phase two, influences of the former are likely to infiltrate the latter. This may not be the most desirable situation. As a government programme, Gama Neguma utilises exiting government administrative structures at all levels through the Grama Niladari and Samurdhi Development Officers, who participate in the Jana Sabha (community level council). This influence may dilute the autonomy promoted and achieved through the Gemidiriya project.

The second phase also attempts to mitigate some of the resistance experienced to project implementation from political forces at the grass-roots level. This is planned to be achieved by the greater participation of Pradeshiya Sabhas (local politicians). With greater participation of local authorities there may be a conflict of interest between village organisations and the Pradeshiya Sabhas. Community ownership and autonomy in decision making is a unique aspect of the project which is largely responsible for its success. Will the loss of autonomy may reduce the incentive for villagers to invest in the organisations (which is vital for the financial sustainability of each business) and subsequently reduce the participation of villagers in the Gemidiriya Project.

The community level autonomy and ownership along with the circumvention of government authorities in the operational aspects of community decision making are  institutional features of the Gemidiriya model which have made it a success. Granting village communities greater autonomy and ownership in community projects increases their incentives to maximise efficient production. It is these idiosyncratic features of the project that warrant its greater implementation over both the Samurdhi and Gama Neguma initiatives.

Whilst it is justifiable to further capitalise on the achievements of the first phase of the project, care must be taken to avoid eroding the facets of the project which have been instrumental in its success. Alterations made to the operational and decision-making aspects of the project may negatively affect the running of village companies, especially where there arises a conflict of interest between members of the village communities and the politicians. Similarly, the merging of both the Gemidiriya and Gama Neguma projects may dilute the effectiveness of the former, owing to the fundamental differences in the structures of the two schemes.

Thus far the Gemidiriya model has successfully managed to empower villages by guiding them towards self-sustainability. It is important that the institutional integrity of the Gemidiriya model is not altered drastically so as to continue its efficacy as a tool for poverty reduction through the second phase of the project as well.