How do demographic changes affect economic growth in Sri Lanka?

Sri Lanka’s demography has come to a turning point where its prime working age population (aged 25-54) is shrinking and ageing simultaneously. This will impact heavily on the labour market and has the potential to reduce economic growth as the available workforce has decreased while the number of dependants has increased *. This raises the issue – how can we counter the impact that demographic changes have on the labour market? Let us look at some of the key strategies which could be employed to mitigate the negative effects of the current demographic changes. 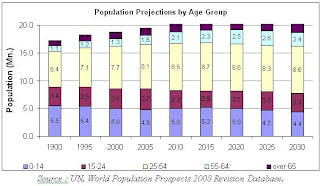 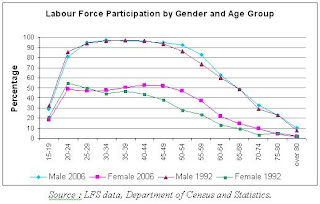 One aspect that would need to be addressed is how more females can be persuaded to participate in the labour force. Even though at present the unemployment rate has come down to 5%, female unemployment still remains at 8%. To entice more women into the labour force it is necessary to increase both labour market choices and chances for female workers by providing more work opportunities that are attractive to them. In addition, measures should be taken to make it easier for older people to enter employment by offering opportunities that are more attractive to older workers, coupled with better training and re-skilling to make them attractive to employers. Sri Lanka must provide regular training, flexible working hours and good working environments with suitable work task and team work to maintain a productive labour force. By enticing more women and older age people into the labour force, Sri Lanka may be able to delay the shrinking of its labour force by a few years.

What, then, is the impact of temporary migration on the labour force? According to the Sri Lanka Bureau of Foreign Employment, there have been about 200,000 departures for foreign employment per annum. The number of temporary migrants is about 3% of the labour force. If these trends continue, it will further accelerate the shrinking labour force phenomenon. However, remittances have become a major source of external financing for the country and its potential developmental impact on the economy remains quite significant. As of 2008, remittance inflows account for nearly 8% of Sri Lanka’s GDP.

Economic growth of the country depends not only on the number of employed workers but also their labour productivity. Thus, while increase the labour force participation it will also be important to improve their productivity. According to the estimates of the Central Bank of Sri Lanka, overall labour productivity has continuously increased over the last few years, recording an average increase of around 5% per year between 2005 and 2008. Productivity improvement can be achieved by improving technology, skills development of the workforce and by redeploying the existing workforce.

These scenarios highlight the key fact that despite the adverse demographic changes Sri Lanka is set to face in the coming years, we can mitigate this and achieve even faster rates of economic growth by expanding and increasing employment opportunities and also by improving labour productivity.

* Vodopivec, Milan and Nisha Arunatilake (2008), “The Impact of Population Ageing on the Labour Market: The Case of Sri Lanka”, Discussion Paper No. 3456, IZA