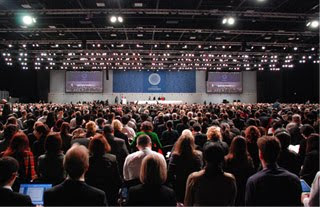 The much awaited Climate Change conference (COP15) concluded in Copenhagen on the 18th of December. While the Kyoto Protocol is to expire in 2012, the COP15 was expected to come up with necessary arrangements for the post-Kyoto period. The conference was expected to deliver an internationally agreed solution for the problem of global climate change. The key issues which were discussed at the COP15 included reductions of green house gas (GHG) emissions, climate aid for poorer countries, forest issues, monitoring of pledges, and details of a legal framework to govern the above.

Has Copenhagen been able to deliver the anticipated goals? Expectations were high, considering the task of coming to agreement on the management of the most complex of global commons – the climate. As things turned out, the COP15 created more disappointments than solutions, among a number of groups, expecting a meaningful solution to combat global climate change. What has COP15 really achieved? What would be the way forward for vulnerable countries, specially the developing economies like Sri Lanka?

What has COP15 achieved?

The final outcome of the COP15 was the Copenhagen Accord, which is not a legally binding agreement, scheduled to be operational immediately in January 2010. This is expected to be signed by all the participating countries, although some countries are reluctant to do so at the moment. The Accord does not include commitments to quantitatively defined emission reduction targets. However, the Accord stipulates that by 31st January 2010, Annex I countries (developed nations) must submit and then implement self defined emission reduction targets for 2020. Non-Annex I countries (developing nations including Sri Lanka) have no such obligation, but they are required to identify self defined climate change mitigation actions by January 31st 2010. Non-Annex I countries can also specify which mitigation actions will require international support (in terms of finance, capacity building, technology, and so on). The Accord also commits developed countries to act collectively to provide new and additional resources for adaptation and mitigation needs of developing countries. The stated amount is US$ 30 billion for the period of 2010 – 2012, and thereafter US$ 100 billion per year by 2020.

The Copenhagen Green Climate Fund has been proposed to make the financial mechanism operative. The Fund is expected to provide support for projects, programmes, policies and other activities in developing countries related to mitigation, adaptation, capacity building, technology development and transfer. The most vulnerable states, namely the least developed countries, small island developing states, and Africa will be the principal recipients of funds.

What has COP15 not achieved?

The key problem with regard to the Copenhagen Agreement is that it did not include the previously expected multilaterally agreed quantitative targets for emission reductions by individual countries, and deadlines for action. As it stands, the targets will be decided unilaterally by individual countries and are thus less likely to be as ambitious as what would have resulted from a multilateral decision. This is because it is not in each countries interest to set a high target given the fact that there is no guarantee that competing countries will set an equally high target – a classic case of ‘Prisoner’s Dilemma’. The quantitative targets set by the Kyoto Protocol will not be operational beyond 2012, hence the Copenhagen Accord has failed to provide the expected follow up to Kyoto – that is a binding global agreement that transparently defines individual country responsibilities in reducing global carbon emissions with a view to averting a temperature rise of over 2 degrees Celsius.

Failure to generate a legally binding agreement in COP15 highlights how difficult is to find a common line of action among countries with different national interests. Like on many occasions, substantive action, i.e., a legally binding treaty, has been passed over to a future event, this time to the meeting to be held in Mexico, in 2010. However, will Mexico be another face-saving exercise with no real outcome?

In the absence of a legally binding agreement in place, the historical polluters and fast-growing economies with high pollution levels, have no commitment to take necessary actions to reduce their emissions. In such a context, the vulnerable countries would continue to face adverse effects of global climate change in the years to come. Belonging to the low-emitting group of countries, climate change will be a significant challenge for Sri Lanka’s development too. Adaptation remains the way out !

Adaptation necessarily requires financial and non-financial resources which the country is lacking at present. The Copenhagen Accord includes provisions for the mobilization of funds to support such adaptation measures defined by developing countries. Thus, more than ever, there is an urgent need for Sri Lanka to develop a national level agenda that identifies necessary actions for climate change adaptation, including the requirements for external support in implementing such measures. Regardless of the hazy outcomes of Copenhagen, Climate Change has to be an integral focus in Sri Lanka’s future development activities.