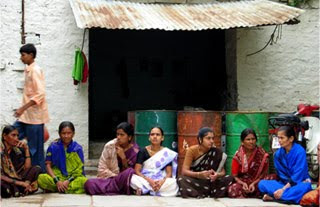 
Does Sri Lanka already have an adequate prudential regulation and supervision for MFIs?
With a long history of provision of microfinance services, the microfinance sector in Sri Lanka has gained a considerable level of maturity over the years. As a result, diverse types of institutions providing microfinance services exist, including co-operative societies, commercial banks (both state-owned and private) and development banks, Non-governmental Organizations (NGOs) and International NGOs (INGOs). There was a sharp increase in the latter varieties after the Tsunami in December 2004. There are several microfinance programmes run by Government agencies as well. However, despite this maturity, the MFIs have not diversified their product portfolios adequately, and many have not even attained operational self sufficiency, let alone financial self sufficiency.

At present, regulation and supervision of the microfinance sector in Sri Lanka occurs within a fragmented and complicated structure. There is no single body to regulate and supervise the operations of all MFIs. Instead, several Ministries, Departments and Government Acts control the operation of MFIs. The regulatory requirements and standards of each of these regulatory bodies are different, complicating the current regulatory framework. The institutions providing microfinance facilities are subject to prudential or non-prudential regulations according to the nature of their establishment. MFIs in this sense can be divided into non-bank MFIs and banks. In Sri Lanka the non-bank MFIs are of two types; Cooperative Societies such as Thrift and Credit Cooperative Societies (TCCS) and NGOs. Whilst these institutions are subject to a certain level of prudential regulation, unlike formal banks (be they commercial, development or licensed specialized banks, all of which are regulated by CBSL), such regulation is not compulsory since registration of NGOs under a relevant financial Law/Act is optional. Non-prudential regulations could be implemented by “second tier” institutions (National Development Trust Fund (NDTF) is an example) and through self-regulation. Though unable to impose any legal obligations since they are not regulatory agencies, second tier institutions can nonetheless set certain performance and reporting standards to be achieved by the MFIs. The State of the Economy Report, 2005 of IPS provides a detailed description of this. 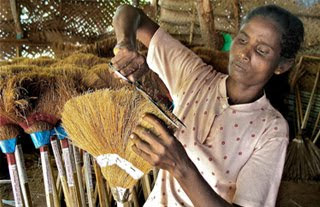 What does and does not work in the exiting regulatory and supervisory framework?
One determinant of the success of MFIs is the level of financial regulation and supervision a government requires. This can be both prudential and non-prudential regulation and supervision. While prudential regulation directly sanctions and assumes the responsibility for the soundness of the system, non-prudential regulation only offers guidelines and standards. Prudential regulation brings in benefits by avoiding banking crises, protecting depositors and encouraging financial sector competition and efficiency. The degree of financial regulation and supervision depends on the country context.
Sri Lanka’s MFI regulations have been characterized by numerous weaknesses and inflexibility. For instance, there are a number of controversial issues regarding the regulation and supervision under the Cooperative Societies Law, which restricts operation of MFIs. For example, staffing decisions and issuing relatively large loans to members of a society requires approval from the registrar. The existing regulatory framework does not permit NGOs to mobilize savings both from their members and from non-members, though in practice, the prohibition has generally not been applied strictly. Such restrictions discourage NGOs from getting involved in microfinance activities. Savings is a major component of microfinance, which is an important source of funds to many MFIs and often used as loan security fund. At the same time, a more rigorous and systematic regulatory framework helps to enhance the depositors’ confidence and ensures the institution’s viability. Other than this, there are no capital adequacy requirements, reserve requirements, or requirements relating to loan loss provisioning, loan documentation or collateral applying to NGOs. There are no requirements for the maintenance or provision of portfolio or other accounting data, beyond the general requirements concerning annual accounts that apply where NGOs are registered. On the other hand, it is difficult for MFIs to come under the banking regulations without amendments, as there are a number of legal and financial requirements which the MFIs find difficult to satisfy. With the existing fragmented framework, there are ample opportunities for MFIs to avoid any kind of prudential or non-prudential regulation, though most NGOs involved in microfinance are registered due to the benefits they can receive as a registered entity.
Draft Microfinance Institutions Act
The importance of an enhanced regulatory framework was realized particularly in the immediate post-tsunami period where there was a huge influx of funds to the country for post-tsunami reconstruction and rehabilitation work, which resulted in proliferation of NGOs involved in microfinance. The MFI Act was formulated in this background. The CBSL Annual Report of 2006 provides a box article of the Draft MFI Act. Micro Finance Business for the purpose of this Act is defined to be the “acceptance of deposits or receiving and/or obtaining external funds and providing financial accommodation in any form and other financial services, particularly to low income persons and to small and micro-enterprises”. The Act is comprised of 53 sections organized under 14 parts.
Structure of the Proposed Micro Finance Act 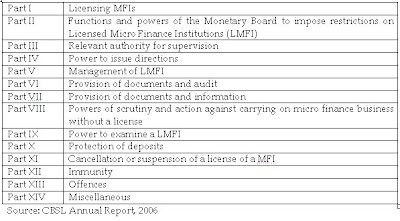 Why MFIs oppose the enactment of the MFI Act?


Many MFIs oppose the Act as they perceive the draft Act to be overly restrictive.
– The minimum capital requirement is felt to be high. However, the Act provides different levels of minimum capital requirements for MFIs operating at different levels/ stages
– There is a degree of ambiguity in the administrative framework in the Act, and this has led to concerns, particularly if administrative powers are vested in local administrative bodies, which are perceived as being highly restrictive.
– MFIs fear that the categorization of MFIs (as operating nationally, or localized operation), and deciding capital requirements accordingly, might be restrictive in terms of future operations and will also affect cost and outreach.
– The control of the interest rate is another major issue. The Act enables the regulatory institution to impose an interest rate cap. This is against the basic microfinance theories. The MFIs naturally bear high costs as they provide small loans and they need to charge higher interest rates for the MFI to operate in a sustainable manner.


The argument for a single regulatory authority dealing with MFIs is that centralized regulation of the financial system is necessary as the government has a responsibility for ensuring the soundness of the overall financial system. Any significant deposit taking institution can have an impact on the stability of the financial system. Hence, the government has an interest in bringing the MFIs that mobilize savings under the same system as other financial intermediaries mobilizing funds from the public. Would this apply to Sri Lanka? Is the microfinance sector sufficiently large (compared to the financial sector dominated by the banking sector), that the failure of several MFIs could pose systemic threats? The advocates for the Act including the Central Bank of Sri Lanka argue that it is necessary to safeguard the interests of the depositors on the one hand, and to develop an efficient, sustainable MFI sector, on the other. As the funds held by the MFIs are those of the poor and vulnerable, the negative economic and social effects of institutional failure are even more pronounced, and could in fact affect the formal savings culture amongst the poor in the medium to long term. Further, a more formal regulatory framework would also be important in terms of enhancing access to donor funds, given the greater confidence that it would provide for donors.
On the other hand, detractors of centralized regulation argue that centralized regulation discourages many MFIs given the inherent need for flexibility and the differences in norms of traditional lending and microfinance. If regulations undermine the ability of MFIs to generate savings, this would adversely affect access to finance of the poor. The question is whether tightening up the procedures, to require NGOs to be registered and to monitor their activities will ensure they are properly accountable to their members and third parties.

Another major issue of concern is the capacity of the regulatory authority to supervise the MFI and the cost of such supervision. The cost of supervision, which will be paid by the MFIs as a license fee, will eventually be borne by the poor clients of the MFIs. The increased cost of the administration and reporting requirements will ultimately be passed on to the clients as well. Can the MFIs, which are often not even operationally self sufficient, bear such costs, and ultimately will the poor clients benefit from regulation? Will costs overweigh the benefits gained by regulation? Regulation and supervision undoubtedly should come to the picture at some point, but is it the right time to go for a comprehensive regulation of MFIs in Sri Lanka?