Third Quarter GDP Performance: The Return of Growth in Services 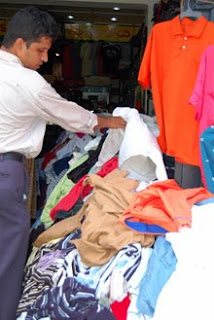 However it is also clear that growth rates remain below pre-crisis levels, Q3 in 2008 saw GDP growth of 6.3%. This is expected given the fact that the economy remains in a recovery stage following the impacts of domestic monetary tightening and the global economic crisis. In this post we examine the sources of growth in Q3 2009 and the implications for monetary policy.

The most positive feature of third quarter growth has been the return of growth in the services sector. The services sector accounted for 59.5% of GDP in 2008 and had contracted sharply since Q4 2008 in response to domestic monetary tightening and the effects of the global economic downturn on Sri Lanka. Having grown at just 1% and 1.1% in the first two quarters of the year, services grew at 5.1% in Q3. The growth in services is an indicator that overall economic growth is on the rise, since this is the sector that has driven economic growth in recent years.

The expansion in services is likely to be largely due to domestic causes. The recovery in the global economy can not to a great extent explain the improved performance in services in Sri Lanka since the service subsectors most exposed to the external economy have either continued to contract or grown only marginally.
Import trade : -1.5%
Export Trade : 0.7%
Ports and Aviation : 2.2%
Whilst the hotels and restaurants sector grew by 20.5%, given the relatively small size of the sector, the contribution to total services growth was very small (1.4%). In fact if the sum of the growth of these 4 subsectors is taken into account, they contracted by LKR 278 million. Therefore the major driver of growth in services in Q3 was domestic demand, due to factors such as increased consumption in post-war regions and the multiplier effects of fiscal expansion.

Major Contributors to Growth in Q3 2009
According to the data released by the Department of Census and Statistics, real GDP increased by LKR 25,553 Million in Q3 2009 over that of Q3 2008, a growth of 4.2%. The services sector expanded by LKR 18,577 Million, contributing 72.7% of the total growth in GDP and is thus the clear driver of growth. The industrial sector expanded by LKR 7657 Million, a growth of 4.4% and contributing 29.9% to total growth. The agricultural sector contracted by LKR 681 Million (-0.87%) – largely due to a contraction in paddy production (contraction of 28.4% compared to Q3 2008).
The key sub-sectors that contributed to Q3 growth were within the services sector, including domestic trade, transport and financial services. Domestic trade growth contributed 22.5% to total growth of GDP in Q3.
Sub-Sectoral Contributions to GDP growth in Q3 2009 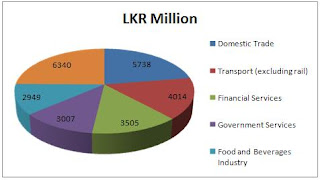 It is interesting to note that important export sectors such as garments and export agriculture continued to either contract or stagnate during this period.
The return to growth of services is encouraging and suggests that the Sri Lankan economy has taken some of the key steps in economic recovery. These latest growth figures will call for re-thinking of government stimulus measures in support of economic recovery. In the context of economic growth returning and inflation beginning to pick up in November (2.8%), it is necessary to assess the need for further monetary stimulus as demand pressures may increase. However it has been argued that there remains monetary policy space given the gap between inflation and interest rates, and that therefore there is scope to further relax monetary policy to stimulate further economic growth, particularly in the context of the need to support post-war economic recovery. Yet the lagged effects of such stimulus measures suggest the parallel need for caution. Inflationary tendencies have thus far been muted due to the low levels of credit demand from the private sector in the context of a deflated economy in the first half of 2009. However with economic recovery, credit demand will increase (both from the private sector and the government – the latter due to post conflict reconstruction in the Northern Province). As this occurs, inflationary tendencies will return, and this calls for greater prudence in monetary policy in the coming months. Sri Lanka has been able to curtail inflation to record low levels; it would be a shame if the opportunity to lock in price stability is squandered. The longer term benefits of macroeconomic stability, in terms of supporting investment and encouraging saving, give further weight to the argument for ensuring price stability to support long term growth.
The latest GDP statistics are encouraging, nonetheless questions remain. For instance, to what extent is the economic recovery in Sri Lanka driven by fiscal expansion as opposed to underlying private sector demand? If this is the case, how sustainable is the recovery, given the need for curtailing fiscal expansion (due to for instance IMF Agreement targets)? Will post war private sector demand be able to compensate for reductions in public expenditure?
All data from Department of Census and Statistics : National Accountshttp://www.statistics.gov.lk/national_accounts/index.htm
Tags: Macro
Related Articles