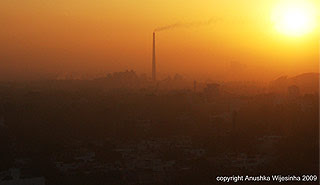 The much anticipated COP15 conference on climate change has commenced and many national delegations have already departed to Copenhagen. A record 15,000 participants will take part in this 2 week conference, conducted under the aegis of the United Nations Framework Convention on Climate Change (UNFCC). Much of the world will eagerly await the outcome of these talks, which hope to set in motion a new treaty to follow the Kyoto Protocol which ends in 2012.

It is going to be another season when climate change hits news headlines and overwhelms popular media discussions the world over. Yet, the limelight it attracted periodically has rarely been matched by real actions to counter this global challenge. In this backdrop, the IPS has conducted a policy analysis, titled ‘Mainstreaming Climate Change for Sustainable Development: Towards a National Agenda for Action’, which is to be released as a publication soon. How will climate change affect Sri Lanka? Do we have a strong national agenda to tackle it? Here are some insights from the study….


Sri Lanka will feel the effects in every sphere

Sri Lanka, being a tropical island of significant poor population located in a disaster prone region, is highly vulnerable to climate change in terms of physical as well as socio-economic impacts. A review of existing information on climate change in Sri Lanka and effects of global warming on local climate was made. Climate change has been studied using two major approaches, namely; statistical analysis of past climate data and projection of future climate conditions with the help of climate models, in Sri Lanka. Analysis of past records have highlighted that air temperature in Sri Lanka has been rising all over the country during the last century. The warming trend has accelerated during the recent decades. Experts suggest that enhanced greenhouse effect could have partly been responsible for rising air temperature together with local effects such as urbanization, deforestation and land use changes. Effects observed in precipitation do not indicate a clear trend as in the case of air temperature. However, negative deviation has indicated for average annual rainfall in the latter part of the century since 1970s, nearly for all years. The decline was mainly reported in northeast monsoon followed by the first inter-monsoon season, whereas changes were negligible in the southwest monsoon season and the second inter-monsoon season. The variation of rainfall has also increased. Moreover, records indicate that occurrence of extreme events such as droughts and floods increased despite the slight drop in incidents of cyclones and depressions during the latter half of the last century.

Sri Lanka’s mean annual temperature is projected to increase steadily, which is consistent with trends observed in analysis of past data. Annual precipitation is also projected to rise; not fully consistent with the negative rainfall trend experienced in recent decades. Not only will we see changes in temperature, precipitation and extreme events, Sri Lanka is set to experience a sea level rise and increased concentration of CO2 in the atmosphere.

Sri Lanka will see impacts in six major areas of critical importance – agriculture and irrigation, coastal zone, forests and natural eco-systems, human settlements and infrastructure, human health and on energy and industry. The IPS report due out soon presents the impacts in these areas using simple effect-impact matrices, which identify the relationship between the various climate effects and their impacts.

The need for a national agenda 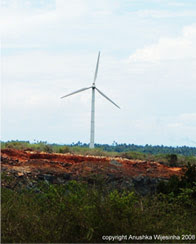 However, in Sri Lanka there are some major barriers against formulating and implementing effective coping strategies actions against climate change at the national and other levels of activity. The information gathered from different sources indicates that there is a lack of agenda and listing of priorities and gaps in coordination as well as resource mobilization gap. While the lack of information, poor coordination and limited resource availability each have their own drawbacks, the lack of a comprehensive agenda overrides them all. If a sensible agenda is made available, even the limited information, facilities and resources could have been put into more efficient use than at present.
Mainstreaming the climate change agenda is key

Such an agenda should be aimed at mainstreaming climate change issues within the overall national effort towards sustainable development, not remain detached from it. Success of such a national agenda would largely be determined by the effectiveness of measures taken to overcome the major gaps highlighted earlier. Such a national agenda can create the conditions necessary to overcome these major gaps. It is an essential pre-requisite to proceed from the backward position we are in now, as far as climate change is concerned.