V for Asia: What About Sri Lanka? 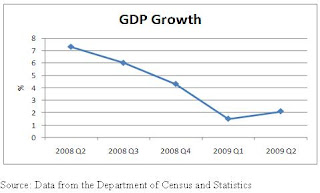 Drivers of Recovery
The end of military conflict in the country has created tremendous optimism and has had some direct short run benefits to the real economy such as the improvement in tourism and the increased availability of land for agricultural cultivation. Agriculture grew by 4.4% in the second quarter of 2009, driven by growth in the paddy sector. However agriculture accounts for approximately 12% of GDP and therefore growth in this sector can not drive the entire economy. The buoyancy of remittances has also helped provide some degree of stability. Sri Lanka did not have a very large discretionary fiscal stimulus due to the weak fiscal situation the country has found itself in. The stimulus amounted to LKR 16 Billion which amounts to around 0.4% of GDP, and much of it was funded by expenditure cuts in other areas, thereby being more a transfer of resources than a stimulus per se. The major attempt at stimulus has been via the monetary channel and also the devaluation of the Sri Lankan Rupee which would have supported net exports to an extent. 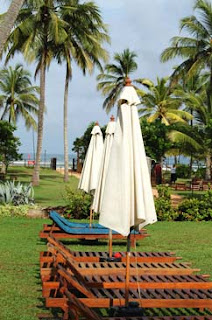 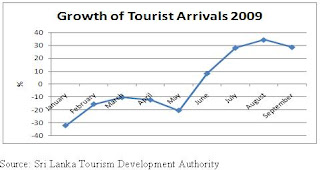 Whilst growth in tourist arrivals has been strong in the months following the end of the war, it should be kept in mind that 2008 was one of the weakest years in terms of tourist arrivals (total arrivals in 2008 was 438,470 whilst arrivals in 2006 were 559,600) and therefore the growth base is somewhat low. It is interesting to note however that the marginal impact of tourism growth on overall GDP is not that significant during this period. According to Tourism Development Authority data (www.sltda.lk/statistics) the average tourist spends approximately US$ 74 per day and stays on average 10 days in Sri Lanka. In the 4 months after the conflict, Sri Lanka has seen a growth of 30,558 additional tourists compared to the same period in 2008, which adds up to approximately US$ 22.6 million in growth of direct tourism income in this four month period. This isn’t a significant figure and therefore is not a major growth driver in its own right. Remittances have grown steadily and significantly, in line with what theory predicts about the relative stability of remittances as a source of external finance, even in times of crisis (SeeIPS State of the Economy 2009 for more detailed analysis). 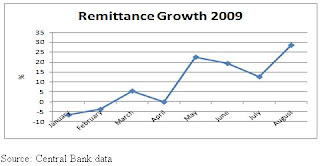 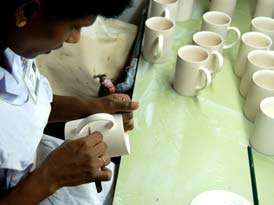 Exports have been increasing in recent months, particularly considering month-on-month growth. However when compared with export performance in 2008, exports have shrunk in every month of the year this year. 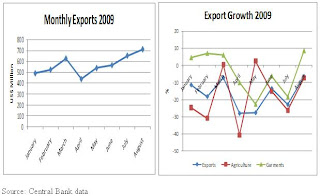 It remains too early to ascertain whether the upward shift in exports (and the positive growth in garment exports) is a return to a phase of growth or simply a short term positive shock (like June). The improvement in the global economy is of course cause for some relief with regard to export prospects, however it should be kept in mind that the prospects for rapid long term demand growth in Sri Lanka’s traditional export markets remain somewhat muffled given the debt position of consumers and unemployment in these countries.
Monetary Stimulus
The fundamental concern in the Sri Lankan economy is the weak performance in the services sector. The sector accounts for 59.5% of GDP and grew at just 1% in the first quarter and 1.1% in the second quarter of 2009. The main factor accounting for this is the weakness in wholesale and retail trade (which accounts for 40% of the total services sector) which contracted by 2.5% and 5.4% in the first and second quarter of 2009. This contraction is due largely to the contraction in domestic credit (though import trade and export trade components would have been dented by the global economic crisis as well). However, as can be seen in the table below, the contraction in credit to the private sector has not abated despite the monetary stimulus implemented by the Central Bank. 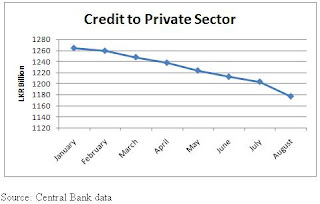 Therefore the real drivers of economic recovery in Sri Lanka are yet to emerge. However it is expected that these drivers will emerge in the 3rd and particularly the 4th quarter of 2009. The effects of monetary policy relaxation will filter through to the commercial banks and lending will pick up as financial sector stability returns after a turbulent 2008/2009 during which several financial firms collapsed and sector stability was greatly undermined. More importantly, medium term business confidence has grown with the improved security situation and investment is likely to increase significantly in 2010 – and this should be an important driver of economic growth in the short to medium term.
Tags: Asia International Macro
Related Articles