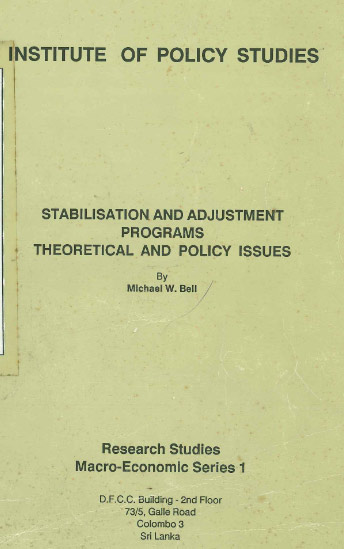 In a small open economy, like Sri Lanka’s, the response to a build-up of excess domestic demand or to an exogenous shock is likely to be either an increase in inflationary pressures or (where initially the foreign exchange constraint is not binding) excessive imports leading to external payments imbalances. Both are harmful to the economy. Economic stabilisation policies aim to restore sustainability to the balance of payments, contain inflation, or both.

The concept of short-term stabilisation is appropriate where the effects of disturbances to the economy (whether endogenously or exogenously produced) can be corrected quickly and sustainably. However, the persistence of inflation and an external payments imbalance may reflect more fundamental structural distortions, often exacerbated by the particular vulnerability of developing countries to external shocks. In such cases more broadly-conceived programs of adjustment are needed to restore financial balance and to increase the economy’s resilience to withstand adverse external conditions. The correction of persistent structural imbalances through longer-term adjustment policies may well include an initial stabilisation component. In this sense at least, stabilisation programs may be viewed as a special sub-set in adjustment programs.

Many developing countries, perceiving the need for far-reaching reforms during the 1980s, have especially emphasized adjustment with growth-orientation as a means of ensuring stable financial conditions. At the same time, there has been growing recognition of the severe social costs of some aspects of adjustment, and increasing attention is being paid to alleviating the impact of adjustment on the poor.

This paper is intended to identify issues rather than to present a fully elaborated, formal framework. The emphasis is on policy in general terms, although some reference is made to the Sri Lankan experience. Subsequent sections are organized as follows: Section II is an overview of alternative perspectives on stabilisation and adjustment; Section III reflects on issues in the design and implementation of IMF-supported programs; Section IV briefly reviews the Sri Lankan experience with the adjustment process; and Section V suggests further issues germane to the study of instability, and its structural causes in Sri Lanka.