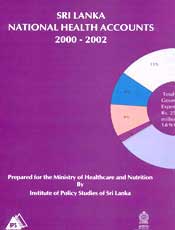 This report presents the Sri Lanka National Health Accounts (SLNHA) preliminary estimates for the period of 2000-2002. Estimates throughout this report are derived from the Data Base of the IPS Health Policy Programme.

The expenditure aggregates in this report are expressed both in nominal terms, and in constant (1996) prices. In converting current price aggregates into constant prices the Central Bank’s GDP deflator has been used throughout. Estimates of private expenditures are compiled mostly from survey sources.

Trend in Total Expenditure on Health

Services of curative care, and medical goods dispensed to out-patients are the two largest categories of spending by function.

Out of the total government spending by function, Services of Curative Care account for 65 per cent in 2002. Share of Preventive and Public Health Services has remained at 9 per cent 2000 through 2002.

A marginal increase was seen in the share of Health Programme Administration and Health Insurance at national level, from 4 per cent to 5 per cent during 2000 to 2002. Share of Capital Formation of Health Care Provider Institutions declined from 10 per cent in 2000 to 7 per cent in 2002. In the government sector, capital formation decreased from 21 per cent of total expenditure in 2000 to 15 per cent in 2002.