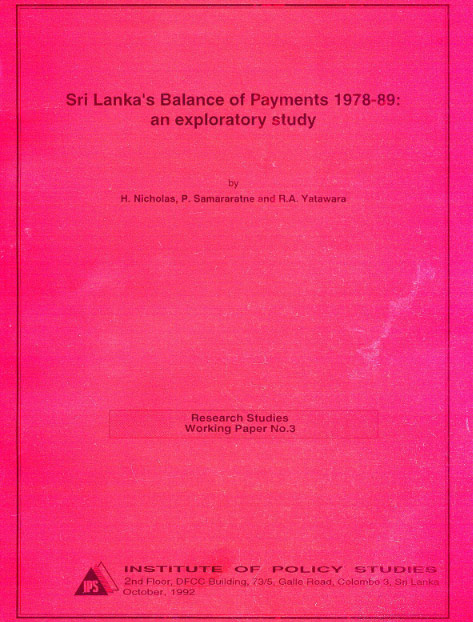 The aim of the study is to analyse the balance of payments performance of the Sri Lankan economy with a view to identifying the major factors which account for this performance. Arguments are developed and propositions explored at various levels of generality. Explanations of phenomena at lower levels of generality are intended to reinforce and enrich the picture painted ate higher levels. The time period chosen for the study is the post 1978 period. A longer time-span would have perhaps permitted a better appreciation of the influence of structural factors, but data limitations and other considerations precluded such a broadening of the time horizon. Given the exploratory nature of the study, considerable use is made of graphs and simple statistical indicators. Since many, if not most, of the time series data which the study makes use of are strongly trended (upwards), rates of change transformations have been applied. The problem with the use of trended variables, is that they tend to be highly correlated with each other “with the obvious danger that such correlations will be at least partly spurious” (see Thomas 1985:6).

The fundamental conclusion of the study is that developments in Sri Lanka’s external payments situation over the short-term can be seen as fundamentally an outcome of developments in the external environment. At a policy level, and in somewhat general terms, this means that effective economic management needs to take cognizance of the latter. Failure to do so could lead to serious miscalculations in planning and policy formulations.