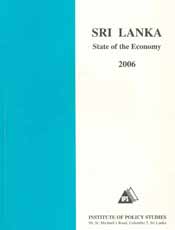 The Sri Lankan economy has seen a return to a relatively strong output expansion with GDP growth expected to be close to 7 per cent in 2006. The post-tsunami surge in foreign capital inflows, supported by broad based growth across all sectors has offered a reprieve to the economy to withstand pressure on the external front emanating from high international oil prices. While the short-term economic outlook has brightened, the Sri Lankan economy will have to overcome constraints – not least the continued threat from escalating oil prices – before it can be confident of sustaining the growth momentum. A critical area for reform remains restructuring the country’s public finances. The report notes that the quality of fiscal consolidation needs to be improved by re-orienting expenditures to priority and growth enhancing areas.

The report notes the urgent need to take Sri Lanka’s economic reform programme to tackle remaining supply-side rigidities. While some key infrastructure projects in the areas of energy, roads, etc. have been initiated, much remains to be done. The policy priorities needed – in the restructuring of state owned enterprises (SOEs), addressing rigidities in land and labour markets, etc. – for the ultimate aim of simultaneously increasing growth and reducing poverty are discussed in some detail. For example, in the key area of agricultural reforms, the report examines the unresolved debate over whether land reforms will encourage small family farms or lead to a dominance by large commercial holdings. Similarly, the policy and implementation issues related to charging for irrigated water and alternative participatory irrigation management systems are discussed at length.

The report looks at issues of social protection for informal workers whose socio-demographic backgrounds and economic activities subject them to various types of risks. The report notes the need for policies to not only facilitate the provision of social safety nets but also the need to re-examine existing labour legislation that may reduce incentives for job creation and limit informal sector workers from entering the formal labour market. Even existing social protection schemes such as the Samurdhi programme – where benefits are being raised by as much as 50 per cent from 2006 – appear to have inherent problems of poor targeting as discussed in the report.

The report also looks at the future for reform in the SOE sector. It recognizes that there are various modalities of public ownership, with varying degrees of success across countries. The report notes, however, that restructuring of SOEs in Sri Lanka as currently envisaged where institutions are likely to remain firmly under the control of the government may fail to address the root causes for poor performance. These and other issues of emerging policy interest are dealt with in more detail in the report.
Table of Contents (PDF Format 56kb)