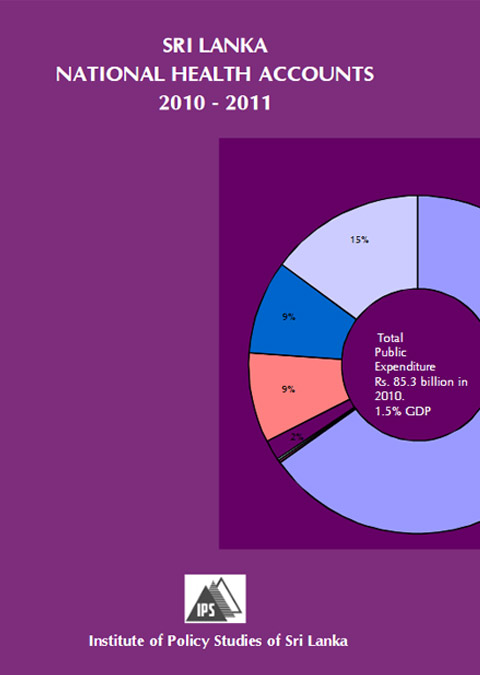 This report which is the fifth in the series provides the National Health Accounts estimates for the period 2010-2011.

National Health Accounts describe the financing flows to the national health system, the direction of spending and for what purpose, by function. The boundaries of the health accounting framework are embedded in the health system concept. Health goods and services provided and consumed are seen in relation to health outcomes for the population and the influencing characteristics of the health status. In essence, this means that the health accounting framework is part of a larger model, in which the determinants of health play a crucial role.

The Sri Lanka population is served by a dual health system comprising of both public and private health sectors. In recent years, rapid economic growth has led to a significant growth in the private health sector with an increase in the number of private hospital facilities in the country. Sri Lanka has a well-known universal health care system with government financed public sector services which cover the entire population. The public health sector has a free, open-door policy in regard to general out-patient services and hospital admissions. Private health services are financed through fee-for-service arrangement mainly by out-of -pocket payments, and for those covered by voluntary private health insurance funding is through insurance companies. National Health Accounts identify these sources of funds and expenditure pattern by different providers and their expenditure by functions.

The key players of health financing are the central government, the nine provincial governments, local authorities, and statutory authorities such as the President’s Fund and Employees’ Provident Fund in the public sector, and private individuals, households, insurers, private sector companies and non-government agencies in the non- government sector. The National Health Accounts provide an analytical view of the financial burden of the key players.

The Sri Lanka National Health Accounts framework was adapted from the OECD System of Health Accounts (OECD SHA, 2000) classification with minor modifications to suit the local needs. This report presents the health expenditure estimates by source of funding, by function, and by provider for the period 2005-2009.