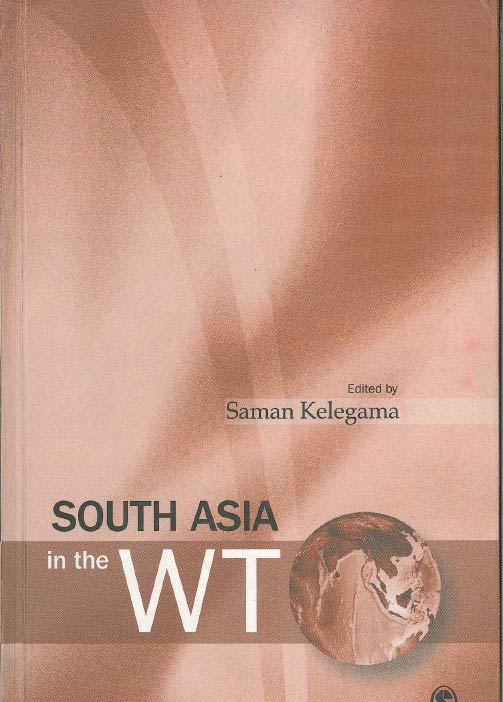 “South Asia in the WTO”

Foreword of the book as a pdf (PDF Format 367KB)

The book comprises of nine chapters, seven of which are country dedicated, the introduction, and the final chapter where a panoramic view with some recommendations are presented. In the first line of the introduction Kelegama makes a distinction between what he calls developing and least developed countries amongst the seven in South Asia….
Review (PDF Format 740KB)
Review by Parashar Kulkarni

The Nation, 8 June, 2008–The Doha Round of WTO trade negotiations is moving at a slow pace, as the economic and political priorities of the world are elsewhere – the rise of inflation fuelled by oil and commodity prices, the risk of further global slowdown and the recent financial crisis in the West.
Review (PDF Format 26KB)
Review by Ashfak Bokhari

Dawn, 24 February, 2008 – South Asian countries started liberalising their economies unilaterally, or on the dictates of the IMF and World Bank, in the concluding decades of the 20th century. Sri Lanka was the first to go liberal in 1977. Pakistan embarked on the process in 1982, Bangladesh in the mid-1980s and India in a sporadic manner in the 1980s but in a full-fledged manner by the second half of 1991.
Review (PDF Format 125KB)
Review by Paras Kharel

Trade Insight, Vol. 4, No. 1, 2008 – South Asia, hosting 40 percent of the world’s poor, had pinned high hopes on the successful completion of the Doha Round of World Trade Organization (WTO) negotiations. The Doha Round is in limbo, yet the region has little option but to vigorously participate in the negotiations to ensure that if and when a deal is struck, it is not out of sync with its interests.
Download the news article (PDF Format 69KB)
“Sri Lanka for international trade, but domestic concerns will not be compromised”

Sunday Island, 23 December, 2007 – The WTO has become one of the most important international organizations of the modern era where like-minded-groups such as the G-20, G-90 and regional groups such as the EU and the African block play a pivotal role in the negotiations taking place within its framework.
Download the news article (PDF Format 873KB)
“WTO vital entity- Kelegama”

Daily Mirror, 10 December, 2007 – It has been found that regional integration is low in South Asia region which has, as a result of its large population, emerged as an important player in the World Trade Organization (WTO) and the current negotiations under the Doha Round.
Download the news article (PDF Format 15KB)