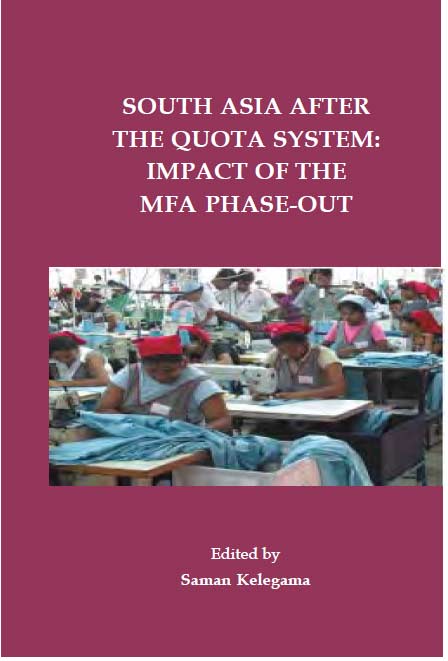 South Asia After The Quota System: Impact of The MFA Phase-Out

The quota system that was the basis of the Multi-Fibre Arrangement (MFA), and which governed trade in textile and clothing (T&C) for the last four decades came to an end on 31 December 2004. The MFA artificially repressed the exports of competitive larger countries that had the capacity to supply T&C in large quantities like India and Pakistan in South Asia. At the same time, by providing a guaranteed market access, the MFA assisted several smaller countries in South Asia like Sri Lanka, Bangladesh, and Nepal to build up their export-oriented T&C sectors. The T&C sector gradually occupied a key position in these economies accounting for large foreign exchange earnings and generating a large number of jobs.

The dawn of 2005 brought trade in T&C fully into the normal discipline of the WTO. Most studies have shown that the new regime will bring global welfare gains, but it is believed that the gains will be unevenly spread — smaller countries in South Asia will face an uphill task to reap the gains while the larger countries will gain without much difficulty. This book shows the preparatory work done by the South Asian countries for the quota phase-out period and measures taken by them to face the global challenge. It also highlights the new issues in global trade in the context of maintaining competitiveness of T&C of the South Asian region.

The book consists of nine chapters which include five South Asian case studies (India, Pakistan, Sri Lanka, Bangladesh, and Nepal). It also covers new market access issues such as social protection, decent work, Generalized System of Preferences-Plus scheme, and many others. The material in the book will be of interest to policy makers, academia, and those actively engaged and working in the T&C industry.
Table of Contents:

“Boon or Bane for South Asia?”

Sunday Island, 25 December, 2005 – The quota system – represented by the Multi-Fibre Arrangement (MFA) and subsequently by the Agreement on Textiles and Clothing (ATC) – which governed global trade on textiles and clothing (T&C) for the last four decades expired on 31 December 2004. The T&C trade was brought into the ambit of the World Trade Organization (WTO) rules since 1 January 2005. The ATC, concluded under the Uruguay Round (UR), was meant to end the prevailing distortions in T&C trade and usher in a competitive milieu.