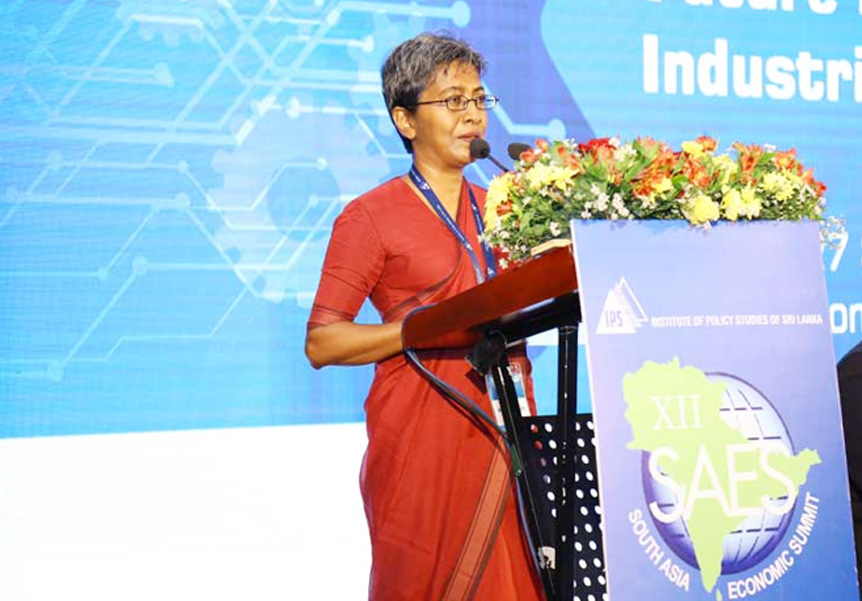 Executive Director of the Institute of Policy Studies of Sri Lanka (IPS), Dushni Weerakoon, called on South Asia to act with urgency to make use of the opportunities presented by the Fourth Industrial Revolution (4IR).

“We need to understand what the intersection of technology, economics and politics means for a diversity of issues from growth, equity to privacy and ethics in South Asia,” she noted.

Dr. Weerakoon made these remarks, inaugurating the 12th South Asia Economic Summit (SAES XII) in Colombo on 26 – 27 September 2019. The SAES XII was organised by the IPS on the theme ‘Shaping South Asia’s Future in the Fourth Industrial Revolution.’

Launched in 2008, the Summit has provided a regional platform for discussing and debating socio-economic challenges facing the region and to foster and develop regional integration and co-operation among the South Asian countries.

Despite being the fastest growing region in the world, South Asia is faced with challenges such as weak public finances, inadequate investment in the public sector, income inequality, global volatility, and shifting geopolitical risks etc.

The SAES XII is the first initiative at the regional level to explore some of these common issues facing South Asia through the lens of the 4IR.

“Unfortunately, the SAARC official processes have come to a grinding halt, so those who engage in public policy should come together in forums like these to learn from each other and bring emerging challenges to the attention of policymakers” Dr. Weerakoon highlighted.

The occasion also marked the release of a new publication, ‘Managing domestic and international challenges and opportunities in post-conflict development: Lessons from Sri Lanka’.

Edited by Dr. Weerakoon and Sisira Jayasuriya and published by Springer, the book contains contributions by locally and internationally eminent Sri Lankan economists, and was released in memory of IPS’ former Executive Director, the late Dr. Saman Kelegama.

Paying tribute to Dr. Kelegama’s legacy, the publication draws lessons from the story of Sri Lanka’s post-conflict development in the context of a struggle for sociopolitical reconciliation, a turbulent world economy and difficult internal and external political challenges. The book will be of interest to researchers, policymakers and development.

Achieving growth, stability, and equity in the 4IR, tackling the challenges in the world of work, promoting innovation, and regulating the emerging technologies, were some of the main issues discussed during the SAES XII, under the overarching theme of ‘Shaping South Asia’s Future in the Fourth Industrial Revolution (4IR).’

Speaking at the Summit, Former Vice-Chair of the National Planning Commission of Nepal, Swarnim Waglé, highlighted that one of the main advantages of the 4IR is that it will increase connectivity, which will change production in South Asia by allowing the region to exploit global production chains. It will also increase employment opportunities, creating new paradigms, jobs, and markets, he added.

However, while the 4IR may allow developing countries in South Asia to leapfrog development stages and achieve rapid growth, it could also widen inequality in the region.

Presenting an example of this issue, IPS Director of Research, Nisha Arunatilake noted that even though the government of Sri Lanka has started a ‘smart school’ concept in the country, it is only implemented in 65 of the 10,000 schools in Sri Lanka, due to resource constraints.

Therefore, governments need to be creative when exploiting the opportunities presented in this digital era, she said.

Strategic Transformation Lead of MAS Holdings, Sri Lanka, Tehani Renganathan pointed out that the 4IR will undoubtedly impact the labour force with new categories of talent and capabilities emerging while compromising and enhancing existing labour.

In this regard, the Executive Director of the Centre for Policy Dialogue, Bangladesh, Fahmida Khatun highlighted that the development of skills catering to new demands of the 4IR is vital.

Meanwhile, speaking on the role of the governments in the 4IR, Economic Analyst and Author, Pranjal Sharma, warned that over-regulation can hinder innovation and hold countries back in the new digital era.

“If governments want to promote innovation, they need get out of the way! The only thing governments should watch out for is monopolistic behaviour. If someone is getting too big, break them up. As they shatter, something new will come up and there is innovation,” he stressed.

As the fastest growing region in the world, South Asia is presented with both opportunities and pitfalls in the technology-led, Fourth Industrial Revolution (4IR). While the region remains vulnerable to rising inequities, technological innovations driving the 4IR do hold the potential to accelerate progress in meeting the Sustainable Development Goals (SDGs), particularly in areas such as education, health and food security.

As such, the disruption of technology through 4IR presents a watershed moment for the region. 4IR is not only driving the Fourth Wave of Globalisation, but it is also introducing new tools to assess and understand competitiveness.

In this context, the 12th South Asia Economic Summit (4IR) aims to uncover the prospects and challenges for the region in harnessing the 4IR and discover potential avenues for cooperation through a multi-stakeholder dialogue. Organised by the Institute of Policy Studies of Sri Lanka (IPS), the Summit is held in Colombo on 26 – 27 September 2019, and will be inaugurated by the Minister of Finance, Mangala Samaraweera.

For South Asia, as in many other developing country regions, the benefits and pitfalls of 4IR are significant. On the one hand, the 4IR may allow countries to leapfrog development stages. Those with better established manufacturing bases or with resources to invest in technologies stand to benefit. At the same time, technological-driven productivity that drives down costs of production in advanced economies can hasten ‘premature’ de-industrialisation in others. For many, the threat of human labour displacement by automation is very real.

South Asia’s challenge, therefore, is not merely limited to technological adoption, but rather a broader challenge to reform its laws, institutions, and economic structures that can adequately respond to a world that does not recognise national borders.

The plenaries and the parallel sessions at SAES XII will explore a broad set of issues facing South Asia, ranging from growth and equity, macroeconomic stability, trade, the future world of work and the challenge of shifting demographic patterns, agriculture, innovation, and security concerns in the 4IR.

SAES XII brings together policymakers, experts, development practitioners, and development partners from South Asia and outside. Bringing together the regions’ leading minds to discuss some of the central development issues and themes impacting South Asia, its people and the planet, the Summit is instrumental in influencing the policy agenda of South Asian governments.

The heightened volatility in the world economy since the global financial crisis, the emergence of China as a dominant economic and military power, and intensifying geopolitical rivalries and tensions pose complex economic and political policy challenges for small countries embarking on post-conflict development.

These issues are nowhere better exemplified as in the case of Sri Lanka. Ten years on after ending the conflict in 2009, which opened the door for reconstruction and economic development, the country is still struggling to manage macroeconomic stability in the face of a burdensome debt overhang, navigate crucial regulatory reforms, and balance economic partnerships.

These are some of the key issues that are discussed in a new publication to be released soon. ‘Managing Domestic and International Challenges and Opportunities in Post-conflict Development: Lessons from Sri Lanka’, edited by Dushni Weerakoon and Sisira Jayasuriya, will be launched by the Institute of Policy Studies of Sri Lanka (IPS) on 26 September 2019 at the 12th South Asia Economic Summit (SAES XII). The book contains contributions by eminent national and international Sri Lankan economists.

Published by Springer, the book is released in memory of IPS’ former Executive Director, late Dr. Saman Kelegama. He was a versatile scholar and committed public intellectual whose research was motivated by the search for solutions to major economic policy issues, including the economic costs of conflicts and war, and the challenges of post-conflict recovery and reconstruction.

Paying tribute to Dr. Kelegama’s legacy, the publication draws lessons from the story of Sri Lanka’s post-conflict development in the context of a struggle for socio-political reconciliation, a turbulent world economy, and difficult internal and external political challenges. The book will be of interest to researchers, policymakers, and development partners.

The book will be released at the Saman Kelegama Memorial Lecture on 26 September to mark two years since his demise. The lecture will be delivered by the Minister of Economic Reforms and Public Distribution, Dr. Harsha de Silva.