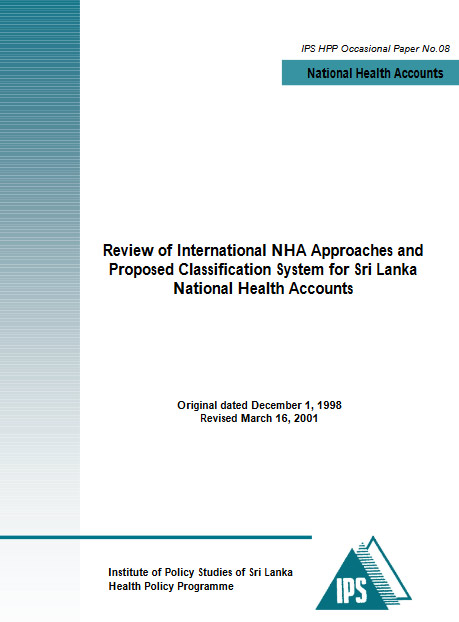 This document provides a review of current definitions and classifications used in nationalhealth accounts (NHA) work by the Organisation of Economic Co-operation andDevelopment (OECD) and four OECD member countries, USA, UK, Canada and Japan.Additionally, the conceptual framework developed for the Hong Kong SAR Government’sDomestic Health Accounts by the Institute of Policy Studies is reviewed, and differencesnoted. Given the similarities between the two systems, the definitions adopted for HongKong are recommended for Sri Lanka in many instances. On the basis of these approaches,recommendations are made as to options for the framework to be used in Sri Lanka’s NHA.Preparation of this document involved a systematic review of the current definitions used bythe four countries concerned, the definitions used by the OECD secretariat in preparing its1998 estimates of health spending in OECD member countries (referred to herein as OECDI), and a draft proposal for collecting international health statistics under preparation by theOECD secretariat (unpublished document made available to the Institute of Policy Studiesby OECD, referred to herein as OECD II). OECD II was revised in September 1998 (OECD,1998), and presented at the 30 September 1998 Ad-hoc meeting of Experts on HealthAccounting in Dublin (herein referred to as OECD III). This meeting, at which IPS and theAsia-Pacific Health Economics Network (APHEN) NHA Group was represented,1 agreed topilot test the new accounting framework in OECD member states during 1998-2000, withthe intention of full adoption of the system in national health statistics data collection by2000/1. The OECD Health Policy Unit agreed that it would cooperate on an informal basiswith APHEN and interested Asian countries in enabling them to also pilot test the draft ofthe OECD system parallel with OECD members, and to dialogue with them in order toincorporate Asian experiences into future revisions. The final pilot version of the revisedmanual was released in May 2000 as OECD SHA (version 1), referred to herein as OECD IV