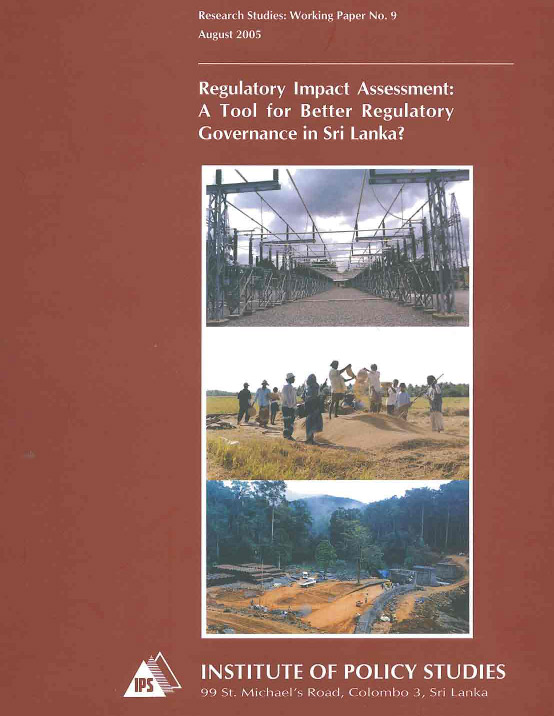 Regulations – broadly understood in the sense of laws, regulations, orders and rules of all levels of government – have a key role to play in promoting economic growth and development. They are tools of addressing market failures, as well as equity failures, when economic growth fails to trickle down to the poor.

However, even as this country has moved along the path of economic reforms, priority has not been given to implementing a well-structured, “independent” regulatory mechanism in the country. Regulations have often been implemented that had unintended adverse impacts, did not realize the anticipated benefits, or that became unnecessarily burdensome.

This working paper describes an international best practice tool for addressing such regulatory failures – Regulatory Impact Assessment (RIA). It goes on to set out a suitable framework to implement RIA in Sri Lanka , taking account of the specific local context.

A market-based economy would not always bring about maximum welfare to society due to inherent failures. This is where regulations come into the picture. A strong and independent regulatory structure balances the system. A good regulatory structure will not only protect consumers but will also serve investors by levelling the playing field.

However, Sri Lanka has seen perfectly well-meaning regulations backfire in practice. This is because regulations have a ripple effect and tend to run up against other existing regulations and impact people and matters not meant to be on the receiving end of it. Therefore, enforcing regulations without a clear understanding of its effects can lead to unexpected results.

This is where a tool called Regulatory Impact Assessment (RIA) can be used. RIA is a method to assess the significant impacts – both the positives and the negatives – of a regulatory measure. RIA can be applied to an existing regulation – to find out how it has already affected people – or to a proposed regulation – to get an understanding of who will be affected by the regulation and how it will affect them, if it is enforced.

The advantages and disadvantages of a regulation are measured by comparing it to alternative options that would achieve the same end as the regulation in question. The range of alternatives includes non-regulatory methods and the possibility of not regulating at all. The best option is picked by discerning the impacts each one has on the different groups in society.

An RIA will consider the full range of impacts – economic, social and environmental – of a regulatory proposal. Therefore, it provides a holistic framework to integrate multiple policy objectives. In this way, RIA promotes sensitivity to wider social and other implications instead of simply imposing regulations on society. It will also minimize the possibility of an adverse effect on vulnerable groups in society.

RIA can be introduced to Sri Lanka’s regulatory structure through a suitable implementation framework. For this, RIA must be accepted by policymakers and regulators and needs to be backed by a strong institutional framework. RIA should be incrementally rolled out through the government to encompass regulatory decision-making at the central, provincial and local government levels.

To institutionalize RIA, it is recommended to set up an RIA unit that has top-level government support. This unit will act as the focal point for the RIA process. The President’s Office, Cabinet Office and Ministry of Finance are the preferred alternatives to locate the RIA unit in, to invest it with the necessary authority. The core function of the unit will be to establish standards for regulatory quality and principles of regulatory decision-making and to provide support to line ministries and regulatory agencies, which will carry out the RIAs. The unit may be constituted as a continuing entity, or it could be given a fixed term to accomplish its objectives, after which it could lapse.

The other aspect relates to obtaining the commitment of the regulators to the RIA process and its underlying philosophy. One suggested approach is through training, which can be done by the RIA unit. Another approach is through undertaking pilot RIAs on selected regulations, whether existing and/or proposed. The advantage of pilot RIAs is that it would make the benefits of RIA readily apparent to the regulators. A pilot RIA would also help obtain broader support in favour of RIA from the government, regulated entities, media, and the grass roots. Therefore, this Paper concludes by making recommendations on a suitable pilot RIA as the next step in taking this process forward.