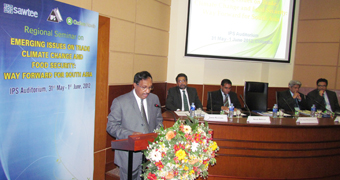 A Regional Seminar on “Emerging Issues on Trade, Climate Change and Food Security: Way forward for South Asia” organized by IPS, South Asia Watch on Trade, Economics, and Environment (SAWTEE) and Oxfam Novib took place on 31 May – 1 June 2012 at the IPS Auditorium.

Minister for Environment, Hon. Anura Priyadarshana Yapa, Chief Guest at the Seminar, reiterated the impact climate change is having in South Asia.

The Executive Director of the IPS, Dr. Saman Kelegama delivered the opening address. He said that although the South Asian region has made very little historical contributions towards global climate change, the region has been and continues to be among the largest victims of its impacts. As per the available scientific evidence, he said that South Asia is one of the most vulnerable regions to climate change impacts in the world. After laying the foundations for what would be discussed and debated throughout, he stressed on the importance of using this seminar as a forum with which to develop the necessary advocacy tools in order to make a “tangible impact on policy makers in the region.”

Former Foreign Secretary and former Secretary General of SAARC, Ambassador Nihal Rodrigo; Executive Chairman of the SAWTEE, Dr. Posh Raj Pandey; and Climate Negotiator for the Maldives at the UNFCCC, Mr Amjad Abdulla, also delivered opening speeches on the varying impact that climate change is having on the South Asia region in terms of trade, food security and general well being; the role of SAARC and the necessity to perpetuate regional cooperation; as well as the vital importance of multilateral initiatives, commitments and cooperation within the region. 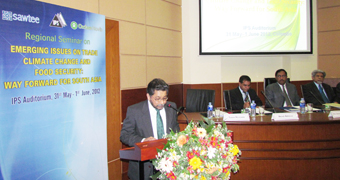