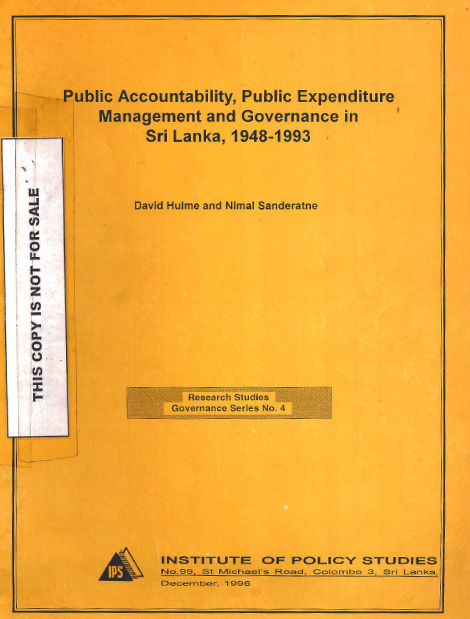 That those in positions of authority should publicly account for their decisions and use of public resources has long been a tenet of democratic theory. The information revealed by systems of accountability, it is argued, will permit the electorate to judge the quality of policies and the integrity of implementation so that the most able and honest can be selected to govern. More recently, the notion of accountability has been linked to that of economic development as a central element of the ‘good governance’ that some believe to be positively associated with higher rates of economic growth and improved levels of human welfare. Public accountability, it is postulated, leads to the selection of policies that will promote development and ensures that public resources are used to yield their greatest return on investment. The World Bank, the European Council, Commonwealth Heads of Government, the UK’s Overseas Development Administration and the Heads of State of the Organisation of African Unity, amongst others, have all linked accountability to economic development in the early 1990s.

Despite the hypothesised importance of accountability in the processes of governance and development there have been few detailed studies exploring the precise nature of accountability in Asian countries. This paper seeks to fill this gap by examining political and administrative accountability in Sri Lanka since independence, with a particular focus on public expenditure management. It commences with a discussion of the concept of ‘accountability’. This is followed by a brief description of the Sri Lankan background and public expenditure trends in the country. The main parts of the paper then examine the changing nature of ex-ante and ex-post accountability and the functioning of the ‘watchdogs’ that police the system. It is found that accountability has eroded steadily since the early 1970s with a rapid deterioration from 1989 till 1992. This paper deals with the period upto 1993. There has been some improvement in accountability since 1993, but the period is too close and too short to evaluate at present. The new government which took office in 1994 has exposed several areas in which the previous government flouted accountability. The concluding sections explore the reasons for the weakening of political and administrative accountability in the country, speculate on what is likely to happen in the future, and shed light on the theoretical issue of the relationship between public accountability and the processes of economic development.