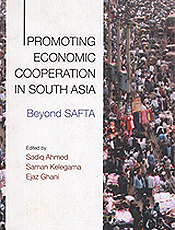 Promoting Economic Cooperation in South Asia: Beyond SAFTA examines the distinct development dichotomy that exists in South Asia and tries to find a workable solution to bridge this gap. In spite of rapid economic growth since 1980, there is extensive poverty and inequality in South Asia. This dichotomy has two faces: one is highly urbanized and well-linked to global markets, and the other is rural, isolated from the global economy, and growing very slowly. The large bulk of South Asia’s poor live in the latter environment.

The book brings together perspectives from academics, the private sector, civil society and policy makers. Using solid empirical evidence and sound analysis, it stresses that in addition to policy and institutional reforms aimed at removing domestic constraints to growth and job creation, market integration and regional cooperation ought to be key elements of a strategy for removing the dichotomy and eliminating poverty in the longer term. Delving into major political economic issues of the SAARC region, the book analyzes SAFTA, bilateral FTAs, transportation, regional integration, regulatory mechanisms, food prices, labor and employment, and tourism. It also provides an analysis of why past cooperation efforts have not worked and how better cooperation can be achieved in specific areas. It looks at the many policy and institutional constraints that contribute to the present state and have made South Asia one of the least integrated regions of the world.

The book will be a very useful reference for researchers, scholars and bilateral and multilateral financial institutions and donor groups interested in South Asia’s development. Policy makers and think tanks focusing on economics, political science, and international relations will also find it beneficial.

Reviews and Highlights in the Media

“The current volume is the outcome of the First South Asia Economic Summit (SAES) which sought to provide a forum for a public debate on economic cooperation in South Asia. The SAES was held in Colombo during 28-30 August 2008, as a follow-up to the 15th SAARC Heads of State Summit, also held in Colombo. This was organized by the Institute of Policy Studies, Sri Lanka, and the Federation of Chambers of Commerce and Industry of Sri Lanka in partnership with a number of policy-oriented Think Tanks such as the Research and Information System for Developing Countries, New Delhi, and a number of international organizations.

Part I of the book brings out the imperatives of cooperation… Part II of the volume deals with free trade and trade-related issues…Part III of the volume presents private sector perspectives on cooperation. Part IV of the volume is concerned with the political economy of cooperation. The final chapter of the book… deals with SAARC programmes and activities…0verall the Volume is a must read for those interested in South Asian regionalism…”
E-Social Sciences, August, 2010
Review by Sandhya S. Iyer, Assistance Professor
Centre for Development Studies, India