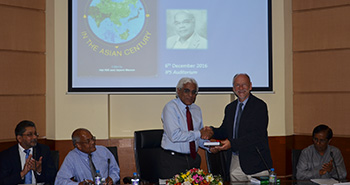 A Felicitation Event in Honour of prominent economist Prof. Premachandra Athukorala was held at the IPS on 6th December 2016.  An Athukorala Felicitation Volume titled ‘Managing Globalization in the Asia Century’ was also presented to the Chief Guest, Dr. Indrajith Coomaraswamy, Governor Central Bank of Sri Lanka by the Editor of the Volume, Prof. Hal Hill, Australian National University (ANU), Canberra. IPS Executive Director, Dr. Saman Kelegama is among the twenty-seven Economists from 9 countries who contributed towards the volume.  Dr. Kelegama also delivered the welcome address at the event, while Prof. Hil , Dr. Coomaraswamy  also highlighted the contributions made by Prof. Athukorala. Economic Advisor to H.E.  the President, Sarath Rajapatirana also made a  Tribute to  Prof. Athukorala while Prof. Athukorala, highlighted reflections of his career.

Following the event, Prof. Hal Hill, of the Australian National University, in Canberra also made a presentation titled “Where are the Southeast Asian Economics Heading?”. Prof. Hill provided an overview and historical snapshots of the Southeast Asia in the global economy, and touched on the topics of the rise of Southeast Asia economically, the importance of ASEAN, the case of industry policy as well as Risks and challenges. 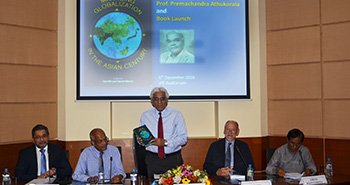 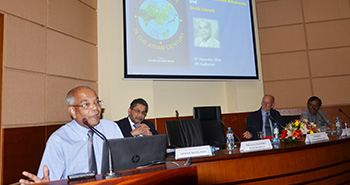 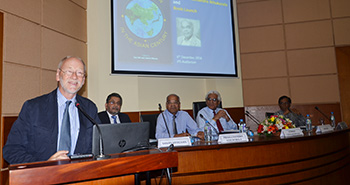