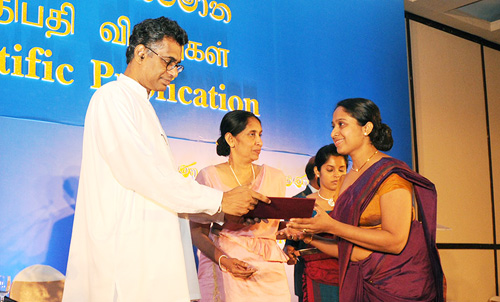 Kanchana Wickramasinghe, Research Officer, IPS won the Presidential Award for Scientific Publications at the ‘President’s Awards for Scientific Publication 2007, 2008, 2009’, organized by the National Research Council of Sri Lanka. Kanchana won this award for the paper titled “Cost to Government Health-care Services of Treating Acute Self-poisonings in a Rural District in Sri Lanka”, published in the Bulletin of the World Health Organization in 2009. She received the award from Hon. Patali Champika Ranawaka, Minister of Technology and Research, who was the Chief Guest at the event