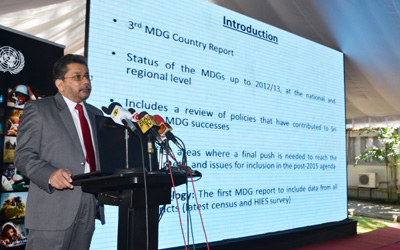 Dr. Saman Kelegama, Executive Director, IPS, made a presentation on the 3rd Millennium Development Goals Sri Lanka draft report  prepared by the IPS team on UN Day at the UN Mission in Colombo on 24th October 2014.

UN Resident Coordinator, Subney Nandy spoke on UN work in Sri Lanka and the assistance to the government to keep track on MDG targets. Executive Director of the IPS in his address highlighted the key findings in the draft report and stated that out of the 26 measurable MDG indicators, Sri Lanka has already achieved 13 and is on track to achieve 11 indicators by end 2015. Only 2 indicators are “off-track” on which the government is currently focusing attention with more interventionist measures. This is the second MDG report that has been entrusted on the IPS by the UN Mission in Sri Lanka.

The IPS research team consisted of Wimal Nanayakkara, Ganga Tilakaratna, Sunimalee Madurawala, Chatura Rodrigo,, Ashani Abayasekera, Suwendrani Jayaratne, Ayodya Galappattige, and Yolanthika Ellepola. With the support of the MDG Steering Committee Chaired by Dr. S. Batagoda, Deputy Secretary to the Treasury, the IPS intends to complete the report before the end of 2014. 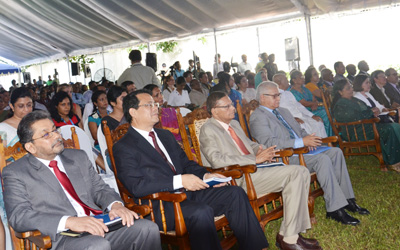