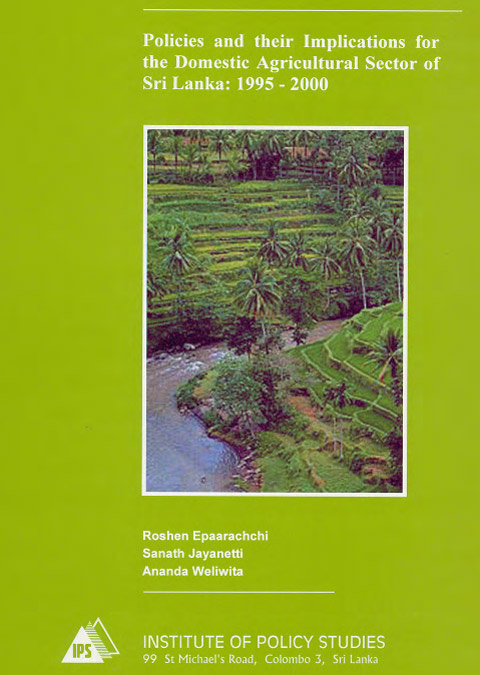 Policies and their Implications for the Domestic Agricultural Sector of Sri Lanka: 1995 – 2000

This paper reviews in detail agricultural and trade policies and their implications for the domestic agricultural sector in general and paddy, potato, big onion, and chillies in particular during the 1995-2000 period. It also discusses the problems and the role of state enterprises in agricultural commodity marketing and various subsidy schemes implemented to enhance production. The paper also documents the constraints that hinder private sector investment in the domestic agricultural sector and the specific incentives provided by the government to attract more investment by the private sector. The paper makes several recommendations for improving the policy and the regulatory environment towards achieving a higher growth. Three issues that warrant immediate attention are emphasized. First, much attention has been paid in the recent past to the issue of continued erosion of profitability of paddy farming over the past several years. Increased cost of paddy production is considered the cause. But, it is emphasized that, it is not the only cause. Failure of the farm-gate price of paddy to keep up with the rising cost of production has also contributed to the problem of declining profitability of paddy production. Second, it is essential to have a consistent tariff policy in order to secure a sustainable long-term growth in the sector. Ad-hoc changes in tariff rates, which were characteristic in the recent past, are not conducive to long-term growth. Such changes create great uncertainty in the market and scare away producers, traders, and potential investors. It is recommended that a uniform ad-valorem tariff rate for all four commodities be implemented with the total tax incidence not exceeding 50 per cent. Third, the forward sales contract scheme recently introduced by the Central Bank of Sri Lanka, in our opinion, is the only market-based alternative to state intervention in agricultural commodity marketing. It is suggested that this programme be taken seriously by policy makers and be given state patronage to increase farmer participation.