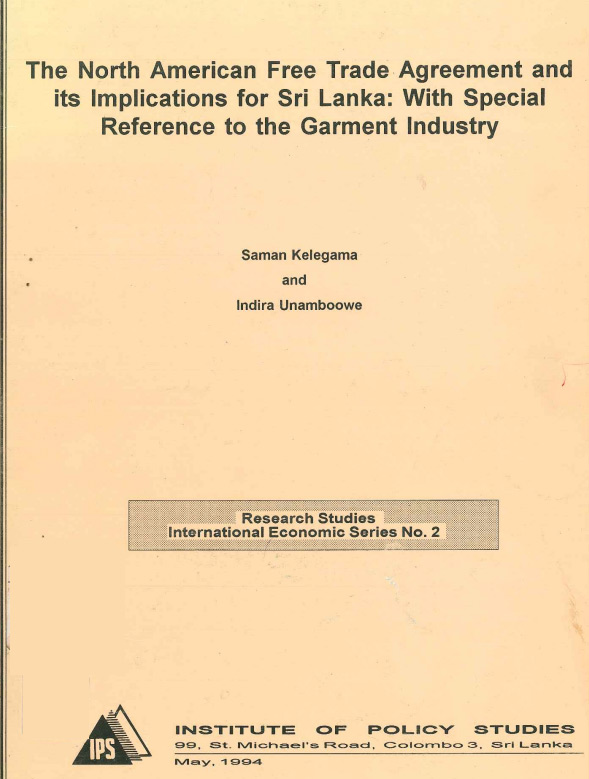 On 1 January, 1994 the North American Free Trade Agreement (NAFTA) came into operation. Under its terms, existing trade restrictions will be removed against the intra-trade of the United States, Canada and Mexico, but will continue to be in operation for imports from third parties. Countries such as Sri Lanka are naturally concerned about their trade being displaced by the NAFTA, which like all other free trade agreements, discriminate in favour of member countries.

At present, 36 per cent of Sri Lankan exports are concentrated in the US market and out of this amount nearly 84 per cent are garments. Thus the apparel exports remain the major concern for Sri Lanka in the context of NAFTA. Some argue that NAFTA poses a serious threat to Sri Lanka’s economy because Sri Lankan apparel exports to US will be substantially displaced by more competitive Mexican apparel while some others argue that the formation of NAFTA is a non-event from the Sri Lankan perspective.

The only available literature that gives at least some indication of NAFTA’s implications for Sri Lanka is a study done for the World Bank by Safadi and Yeats (1993) on NAFTA and South Asia. According to this study, the losses for Sri Lanka due to NAFTA, in terms of 1989 statistics, will be about 1 per cent of her exports to the US market. But the study claims that the potential losses from the decline in exports would be more than offset by the successful completion of the Uruguay Round of trade negotiations. The study however is more focussed on South Asia and the conclusions are based on aggregate statistics. An aggregate analysis for the South Asian region is always biased by the inclusion of Indian statistics. Moreover, the analysis of Sri Lanka’s case is based on the regional model which may not necessarily be valid for a small country like Sri Lanka.

In this study we have re-examined in detail NAFTA’s implications for Sri Lanka. In particular, we have investigated Sri Lanka’s competitiveness vis-à-vis Mexico in the US market. While supporting the basic conclusion of Safadi and Yeats, we go on to show that NAFTA, and the gradual abolition of the MFA, give new opportunities to further expand the apparel industry of Sri Lanka. However, we argue that this will not happen merely by the market mechanism. Substantial work needs to be done both on the marketing side as well as on the supply side, the latter being weak needing more attention. In regard to the Uruguay Round, our analysis shows that there are gains for Sri Lanka, but the gains are not very significant as argued by Safadi and Yeats (1993).

by Saman Kelegama and Indira Unamboowe