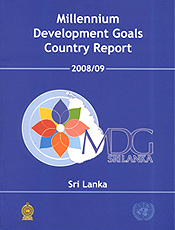 The timing of the second MDG Progress Report is particularly important as more recent data are now available on all indicators as the results of three major surveys conducted by the Department of Census and Statistics (DCS), namely, the Household Income and Expenditure Survey (2006/07), the Demographic and Health Survey (2006/07) and the Special MDG Indicator Survey (2006/07), were published during the course of preparation of this report. In 2007, the midpoint was reached between the adoption of the Millennium Declaration and the 2015 target date, and it is useful to review the progress at the halfway stage and plan for the remaining period. The Progress Report provides MDG indicators not only at the national level, but also at the sector and regional levels, wherever possible, highlighting the regional disparities. It will help Sri Lanka and its development partners to take stock and review progress during the 1990-2007 period so as to identify areas where additional effort is needed to implement the government’s ten-year development framework and meet the remaining MDG targets by 2015.

During the period 1990-2008, economic growth in Sri Lanka has ranged around 4 to 7 per cent. Economic growth is an important pre-requisite for poverty reduction, and the analysis conducted in the context of this second MDG Report clearly shows that poverty rates are declining. Overall, Sri Lanka has achieved considerable success with respect to a range of social indicators that comprise the MDGs and is on track to achieving the MDG targets for most of the remaining social indicators. Although many indicators show encouraging trends at national level, still there are regional disparities which need the attention of policy makers and planners. Inadequate infrastructure and some weakness of service delivery systems are the main factors behind these disparities.

The executive summary of the report gives a brief overview of the overall progress of the MDGs in the country since 1990. This is followed by comprehensive analytical chapters on each of the following MDGs

The Annex 3 of the report gives latest position of MDGs at Sector, Province and District levels and the Annex 4 gives tables related to Goal 8.