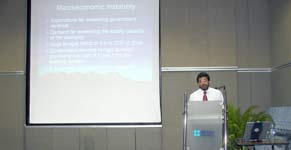 Presentation made by the Executive Director on “Is the Sri Lankan Economy in Crisis?”
(PDF Format 424kb)