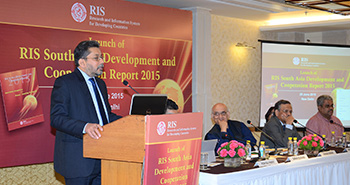 IPS Executive Director, Dr. Saman Kelegama spoke of the “Prospects for SAARC” at the launch of the “South Asia Development and Cooperation Report 2015” published by Research and Information System for Developing Countries (RIS), India. The session was chaired by Prof. Rehman Sobhan, Chairman, Centre for Policy Dialogue, Bangladesh.

The report was launched by the Railway Minister of India, Hon. Suresh Prabu. Several South Asian dignitaries and heads of research institutions participated in the event. This report was the fifth in a series produced by the RIS and the theme of the 2015 report was “Economic Integration for Peace-Creating Prosperity” in accord with the previous SAARC Summit in Kathmandu, Nepal. The event took place at the India Habitat Centre on 25th June 2015.