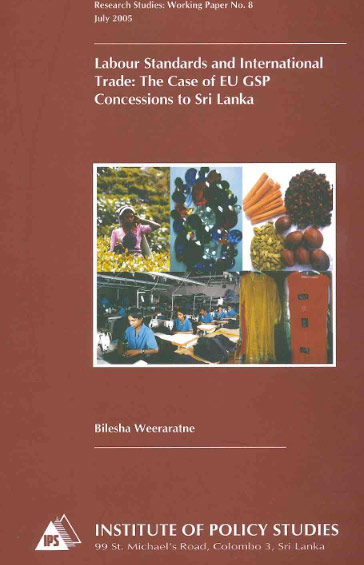 “The Case of EU GSP Concessions to Sri Lanka ” is a Working Paper published by the Institute of Policy Studies analyzing implications of deeper tariff concessions extended to Sri Lanka under the Labour Arrangement of the European Union’s (EU) Generalized System of Preferences (GSP). The publication traces the labour-trade linkage, and underscores the implications and issues of the GSP scheme in the context of the textile and apparel industry in Sri Lanka . The analysis of Sri Lanka ‘s textile and apparel trade performance in EU sets the local industry in the context of its competitors and evaluates implications of the tariff concessions for this industry under two broad themes, namely- market access and image/branding. Some prominent issues addressed are EU GSP scheme’s rules of origin requirements, Sri Lanka ‘s low utilization of concession and underlying reasons.

The linkage between labour standards and international trade traces a long history since the establishment of the International Labour Organization (ILO) in 1919 and became prominent over the years with the establishment of the General Agreement on Tariffs and Trade (GATT) and subsequently the World Trade Organization (WTO). Tariff concessions extended under the Labour Arrangement of the European Union’s (EU) Generalized System of Preferences (GSP) since 2004, is an important juncture in the labour-trade linkage in Sri Lanka. However, such a linkage between labour and trade has many implications and issues that require profound focus. In this light, key concerns of this paper are to underscore the implications of the labour-trade linkage through the EU’s labour GSP concessions to Sri Lanka and emphasize the issues of the GSP scheme.

International Labour Standards as defined by the ILO are conventions and recommendations setting minimum standards of basic labour rights. Empirical evidence on the use of trade measures by developed countries to promote labour standards in developing countries reflect heterogeneous experiences, with instances where negative, positive and neutral implications were experienced. The paper identifies three groups in society affected by labour standards, namely workers, producers and consumers. In the context of workers, a favourable working environment instigated by compliance with labour standards lead to a motivated and productive workforce, which paves the path for greater profitability for producers. Among consumers, ethical consumers would increase their utility by consuming ethically produced goods.

The analysis of the Sri Lankan experience of the EU Labour GSP concessions is with reference to the Textile and Apparel (T&A) industry due to its labour intensive nature of production and its significance in Sri Lanka’s export structure in general and to the EU. Sri Lanka’s T&A industry, which is lagging behind its competitors in terms of wages, productivity and development of backward linkage industries, is benefited by a 40 per cent duty reduction off the MFN rate for exports to EU. Deeper tariff concessions, on the one hand, improve market access of Sri Lankan products to EU. On the other, the image of Sri Lanka concerning the high labour standards maintained in production, enable producers to charge a higher price for the ‘better quality’ Sri Lankan products; detach Sri Lankan products from the price war; compensate for falling prices of competitors’ products; and promote greater trade of high value added apparel exports. Further, the greater demand for ethical products of Sri Lanka would lead to increased production and subsequent investment and improvement of the human capital in Sri Lanka.

Amidst such positive implications, a main issue concerning the labour GSP is the relatively low utilization of concessions due to difficulty in fulfilling Rules of Origin (ROO) requirements. For instance, utilization rate of Sri Lanka’s apparel exports in 2002 did not exceed 32 per cent, primarily due to the high import dependency of the industry. The possible improvement of utilization rates through Regional Cumulation among SAARC countries or the proposed Super Regional Cumulation between SAARC and ASEAN regions are considered ‘not viable’ due to the quality requirements of inputs and buyers’ specification of suppliers. The above findings based on the low utilization level under the general arrangement can be considered an appropriate approximation of the performance of concessions under the labour GSP, due to the similarity in rules of origin. Emerging issues in trade preferences for Sri Lanka include the concern among competitors regarding labour standards in their production bases, which will deteriorate Sri Lanka’s advantageous position and preference erosion caused by GSP concessions extended to other countries, reduction in MFN customs duties, international agreements to abolish duties on selected products and the free trade agreements at bilateral and regional levels.

Recommendations made in the paper to address the above issues are: development of backward linkages of the top export sectors, and improve domestic value addition to improve the eligibility of GSP concessions; possible renegotiation of ROO for favourable ‘specific process criterion’, value addition criteria and of the SAARC and ASEAN regions; and explore the possibility of considering Hong Kong, South Korea and Taiwan along with ASEAN for Super Regional Cumulation.

Thus, the EU Labour GSP Scheme in terms of tariff concessions will be of limited value to Sri Lanka in the short run. However, in the long run the positive implication would enable Sri Lanka to acquire a significant contribution to its identity as an ethical producer of apparel, much earlier than the competitors do. The benefits of this enhanced image will be most valuable in future, where price war and tariff cuts would be eliminated from the list of factors deciding competitiveness of an exporting country and be replaced by ethical trading practices.