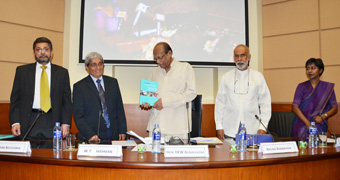 At the National Conference, IPS released its flagship report: ”Sri Lanka State of the Economy 2013”. The Theme for this year is “Sri Lanka’s Transition to a Middle Income Economy”.

Hon. D.E.W. Gunasekera, Senior Minister for Human Resources was the Chief Guest at the occasion. Opening remarks at the event were delivered by Dr. Saman Kelegama, Executive Director of the IPS. Dr. Kelegama in his address stated that this year’s report has taken an ‘explanatory look at many promising development achievements, opportunities and challenges ahead of the country. Dr. Kelegama also stated that the report argues that ‘rising socio-economic prosperities in Sri Lanka, if fostered skillfully and inclusively, with progressive public policy can spur economic dynamism, innovation and social progress and place the country on firmer grounds as it makes a decisive transition into the middle income economy and beyond’.

IPS has been publishing the State of the Economy report since 1992 with a complementary theme selected each year. This annual report, which is conceptualized early this year, is a collective effort by the research staff of IPS.

With the conclusion of the welcome address, the Chairman of the IPS, Prof. W.D. Lakshman presented a copy of the ‘State of the Economy 2013’ report to Hon. Minister D.E.W. Gunasekera. Delivering the keynote address, Min. Gunasekera stated that transiting to a middle income economy brings many challenges to Sri Lanka and addressing these challenges may require key policies and government interventions. The Minister also highlighted that it is important to have a developed skilled labour force, improve quality education and increase access to quality and effective health care in order to sustain economic growth in the country.

The event also comprised three panel discussions on issues related to sustainable growth of the Sri Lankan economy. The three sessions were represented by three key socio-economic experts in Sri Lanka as well as by IPS research staff. The in-depth discussions were made under the broad topics of ‘Macroeconomics & Competitiveness of Sri Lanka’, ‘Youth & Middle Class’ and ‘Social Protection and Climate Change’. 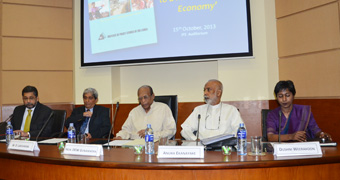