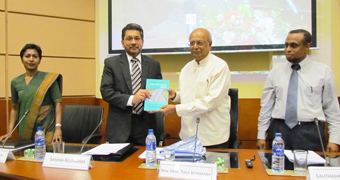 IPS Annual National Conference, “How Can Sri Lanka Stay on the Growth Expressway?

The IPS Annual National Conference on the theme “How Can Sri Lanka Stay on the Growth Expressway?”, took place at the IPS Auditorium on 7th November 2012.

The Chief Guest at the event was the Hon. Senior Minister for Scientific Affairs, Professor Tissa Vitarana.

Delivering the opening address, Executive Director of the IPS, Dr. Saman Kelegama stated that the State of the Economy report, now in its 20th year, is “widely quoted by academics, private sector interest groups, parliamentarians, and civil society groups.” The report, which was conceptualized early this year, is a compilation of contributions from IPS research staff on a variety of subjects integral to the economy of the Post-Conflict Sri Lanka. The topics explored in the State of the Economy 2012 include, Sri Lanka’s global presence; reducing inequality while aiming for rapid economic growth; optimizing natural resources; stimulating innovation; and maximizing the human resource potential in the country.

Dr. Kelegama concluded his remarks, by presenting a copy of the State of the Economy report to Hon. Minister (Prof) Tissa Vitarana. Minister Vitarana then proceeded to deliver the keynote address and stated that he was pleased that the State of the Economy 2012 “gave due place to the roles that science, technology, and innovation, have to play in maintaining a sustainable economy.”

The Annual National Conference, which was organized around the launch of the SOE publication also acted as the platform from which the winner of the essay competition, organized in collaboration with Sri Lankan Universities, was awarded a prize. Mr. Suraj Madushanka, a student from the Uva Wellassa University, was awarded a complimentary copy of the State of the Economy 2012 report as well as a cash gift from Chairman of the IPS, Professor W.D. Lakshman.

A key feature of the report this year is the launch of the State of the Economy e-book. The e-book will contain concise versions of the chapters highlighting the key messages, and primary visual aids. This book is available for download on the IPS website, www.ips.lk, free-of-charge.

The complete State of the Economy report can be purchased from the Publications section of the IPS, located at 100/2, Independence Avenue, Colombo 7.