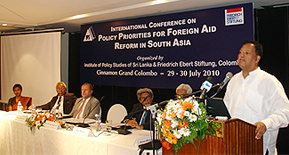 The IPS organized a conference, in collaboration with Friedrich-Ebert Stiftung (FES), on “Policy Priorities for Foreign Aid Reform in South Asia” during 29th-30th July 2010 at the Cinnamon Grand Hotel, Colombo.

The IPS was honoured to have Dr. Sarath Amunugama, Deputy Minister of Finance, attend the conference as the Chief Guest. Former Secretary General of SAARC, Ambassador Nihal Rodrigo, participated as the Guest of Honour. The event commenced with a welcome speech delivered by Dr Dushni Weerakoon, Deputy Director, IPS, which was followed by an address by Dr Amunugama and Ambassador Nihal Rodrigo before the commencement of the technical sessions.

Aid has long become an increasingly prominent feature of development financing within South Asia. The conference was designed to provide a critical analysis of the effectiveness of foreign aid in the South Asian region, creating awareness as to where such funding is working and where it is not. Whilst there has been much dialogue on aid effectiveness in recent times, spearheaded by initiatives such as the 2005 Paris Declaration, it has been largely donor-driven with little input from the recipient countries themselves. The greater significance of donor activity within both the designing and implementation process of development activities in South Asia has necessitated the need for recipient countries to assess the impact of donors in their own countries, so as to extinguish the culture of complacency that has accompanied such resources in the past.

As part of the conference, resource people from the eight SAARC countries in the South Asian region presented papers on aid effectiveness in their respective countries. The participating countries were: Bhutan, Maldives, Bangladesh, Sri Lanka, Nepal, India, Afghanistan and Pakistan. Further to this, there were contributions from key resource persons in government, academia and representatives from major donors operating within the region. The conference was attended by policy makers, academics, donors, civil society and members of the diplomatic community, all of whom had the opportunity to both contribute to and develop their own thinking on the issues at hand. 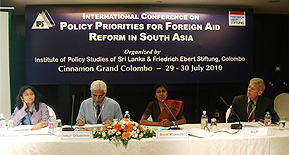 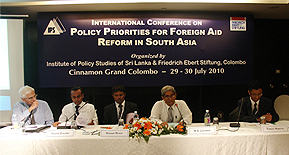 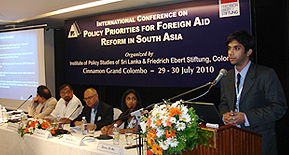 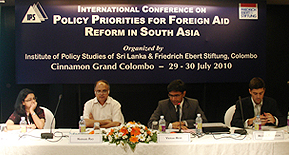 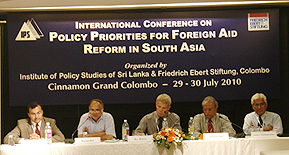 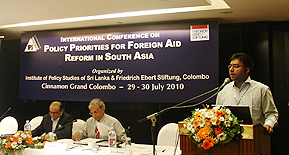 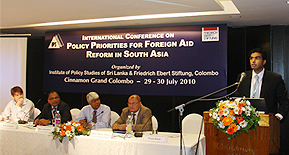