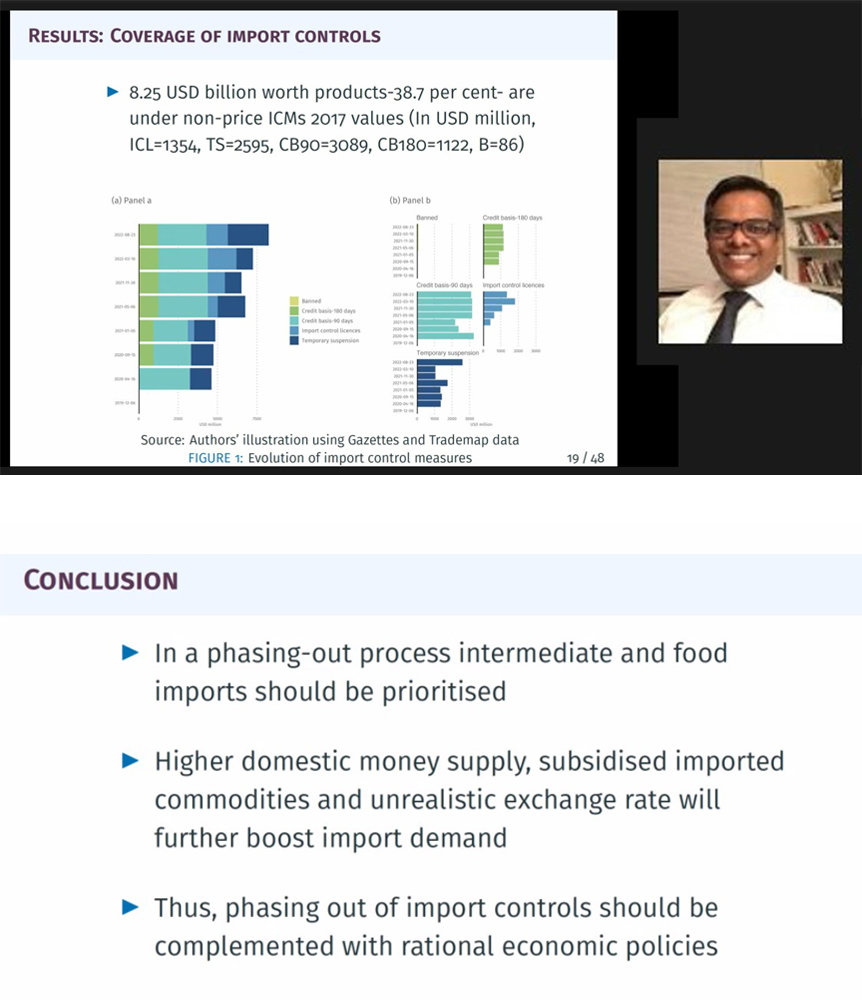 ‘Trade Policy in the Economic Crisis: Coverage, Impact and Reforms’ was the subject of the IPS in-house seminar this month, presented by Research Fellow Dr Asanka Wijesinghe. In his presentation, Dr Wijesinghe presented research findings from an IPS study on the tightening of import controls from April 2020 to August 2022 and whether it indicates a shift to an import substitution industrialisation model. He also outlined policy reforms for an export-led growth strategy.

Dr Wijesinghe noted that initially, policymakers were careful to exempt sophisticated products with high product complexity and intermediate goods while disproportionately targeting food items through the assumption of a possible substitution. However, with the contraction of product space with the continuance of import controls, policymakers expanded import controls to capital and intermediate goods. Thus, the import controls expanded to intermediate and capital imports by the end of August 2022. He noted that the pattern of taking products under import controls follows the import substitution strategy, in which the imports of relatively labour-intensive and less complex products are restricted first, subsequently moving to highly complex products in which developing countries may not have a comparative advantage.

Elaborating on the economic impact of import control measures, Dr Wijesinghe asserted that continuous import restrictions are economically detrimental and will result in reduced economic efficiency. Higher domestic prices of restricted products or their substitutes may incentivise allocating scarce resources to areas where Sri Lanka lacks a comparative advantage. It would also impact export expansion since entrepreneurship and innovation would be constrained as the supply of raw materials is determined by the policymaker rather than the market. Accordingly, Dr Wijesinghe stated that a gradual phasing out of the import controls is necessary for an export-led growth strategy. He stressed that intermediate and food imports should be prioritised in the phasing-out process, complemented with rational economic policies.