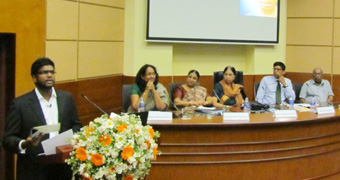 Despite being a middle income country, and having exemplary social development levels when compared to its regional peers, Sri Lanka has one of the lowest rates of female participation in the workforce in the world. In a recently concluded study by the World Bank, this fact was further explored and recommendations were made based on the findings of the study.

The presentation of the findings of this study was done at a forum discussion organized by the World Bank and the IPS. Opening remarks were delivered by Mr. Upali Wijayaweera, Secretary to the Ministry of Labour and Ms. Doina Petrascu, Operations Advisor of the World Bank. Jennifer Solataroff, Senior Development Specialist at the World Bank, then went on to make a presentation of the key findings of the study. These included the reasons driving low female labour force participation in Sri Lanka, and why urgent attention is required to encourage more women that want to work to enter in to the job market. She stated that especially in lieu of the Government of Sri Lanka’s development goals as stated in the Mahinda Chinthana document, it is important to encourage and create an environment that is conducive to increased female participation in the labour force. This will be crucial in order to sustain growth despite a rapidly aging population. Currently the rate, as calculated by the World Bank, stands at 41 per cent, and economic modelling suggested that the current historical average growth rate of 5.1 per cent would fall to an alarming 3.7 per cent in 2020.

Anne Kuriakose of the World Bank, then went on to present the recommendations the report makes in light of these findings. She suggested the Government of Sri Lanka could intervene in three broad areas. Firstly it can support the entry of girls in to remunerative career paths through large scale investment in Technical and Vocational Training. She suggested that more could be done to encourage young girls and their parents to pursue a broader range of educational and career paths. Secondly, she suggested that women should be provided with improved access to job search assistance, as currently the study found that most women have access to only a small network, primarily consisting of parents and close relatives, from which they get information about the availability of jobs. The third recommendation was with regards to the development and expansion of child care services, which would allow mothers to join the workforce.

The first discussion concluded with a lively Question and Answer session regarding to the particulars of the study and was followed by a second panel discussion with representatives from academia, public sector, private sector, and trade unions. The panel consisted of Prof. Savithri Gunasekera, University of Colombo and CENWOR; Mrs. Indrani Sugathadasa, former Secretary to the Ministry of Women’s Empowerment and Child Development; Mr. Malik Fernando, Director Operations, MJF Group (Dilmah Tea); Mr. Leslie Devendra, General Secretary, SLNSS; and Dr. Harini Amarasuriya, Open University of Sri Lanka and CENWOR.

The second half of the Forum Discussion was moderated by Anushka Wijesinha, Research Economist at the IPS, and began with an insightful video documentary featuring several female leaders of industry talking about their experiences being in the labour force. The forum was then the stage for an active discussion on the various elements of the report, with attention being given to the recommendations provided by the World Bank team, particularly to the issue of maternal leave. The role of men, in the new world was also discussed with several comments reiterating the fact that the sensitization needs to happen at a very early age, in order to make society as a whole more receptive to the idea of shared responsibility and equality between the sexes.

Closing remarks were provided by Mr. Wimalaweera, of the Ministry of Labour and Dr. Cem Mete, Lead Economist at the World Bank. 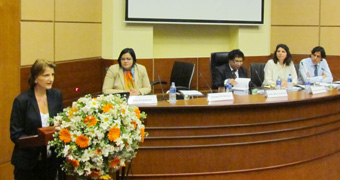