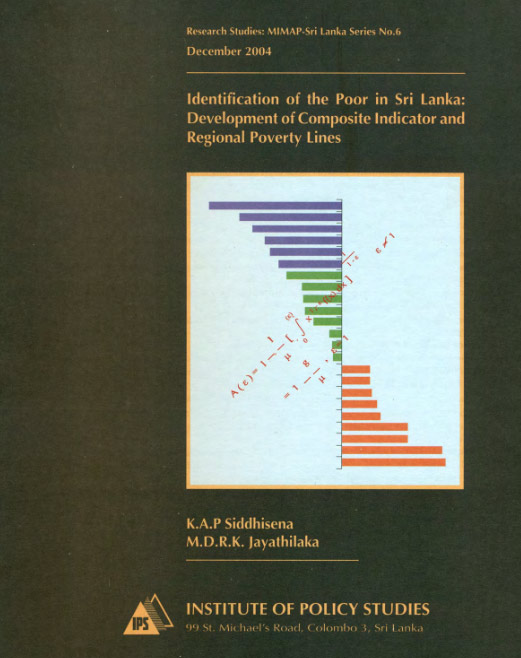 Identification of the Poor in Sri Lanka: Development of Composite Indicator and Regional Poverty Lines

In the South Asian context, Sri Lanka is unique in providing a remarkable package of social welfaremeasures including free universal education and health care services, subsidized food, income transferassistance and certain other sectoral subsidies, and also achieving a high human development status sinceits independence. Nevertheless, the per capita income of the Sri Lankan population still remains underthe group of “lower middle income countries” of US $ 860 in 2001, and between one-third and one-fourth of the population remains below the poverty line, depending on the benchmark poverty line used(Kelegama, 2001). As revealed in the Household Income and Expenditure Survey- 2002 of the Departmentof Census and Statistics, 23.9 per cent of households are identified as poor households whilst 28 per centof the total population is poor. Moreover, when one US dollar per person per day is considered as thepoverty line (adjusted for purchasing power parity), only about 7 per cent of the Sri Lankan population ispoor, but when the poverty line is increased to US $ 2 a day, the proportion of poor population increasesto 45 per cent (UNDP, 2002). Thus, it is generally accepted that more than one-fourth of the Sri Lankanpopulation receives income inadequate to meet their basic needs. Furthermore, large regional variation inpoverty is also an issue in Sri Lanka where national level programmes have not been able to distributeopportunities and resources equitably.