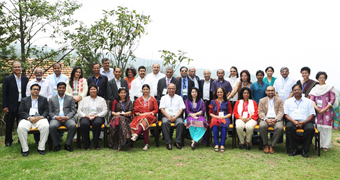 Dr. Dushni Weerakoon (Deputy Director) and Dr. Nisha Arunatilake (Fellow) participated at the Fourth Regional Meeting of Think Tank Initiative (TTI-RM4). The focus of this meeting held during 9-10 June in Kathmandu, Nepal, was on the needs for and the ways of greater cooperation among think tanks in the region.

The meeting concluded with a panel discussion on “What does recent events in world’s largest democracy mean for research uptake and policy influence in South Asia”? Moderated by Mr. Akhilesh Upadhaya, Chief Editor of The Kathmandu Post. Speaking at this session Dr. Weerakoon drew similarities between the current leaders of India and Sri Lanka and expressed hope that these commonalities will help to mend the previously strained relationship between India and Sri Lanka on the issues of human rights and governance. The proceedings of this discussion were recorded for broadcasting in Nepali TV channels.

Dr. Weerakoon also spoke at a session on “Transiting into organic and vibrant South Asian TTI collective “. She emphasized the need for carefully strategizing the ways of regional cooperation, and suggested the establishment of a contributory fund for conducting a study to examine the feasibility of regional cooperation for improving research and policy influence of think tanks. She further indicated that such commitment will also signal the willingness of think tanks to cooperate.

Dr. Nisha Arunatilake was a panelist at a session on “Four years of TTI: Integrating learning within organizations reflecting on achievements and challenges”. Reflecting on the role the IPS has made in influencing economic policy in Sri Lanka and how this role was made more effective and efficient by TTI support she argued the case for further consolidating the TTI programme in the region. 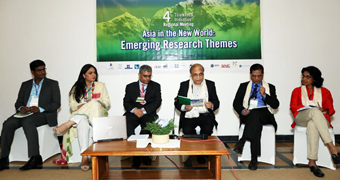